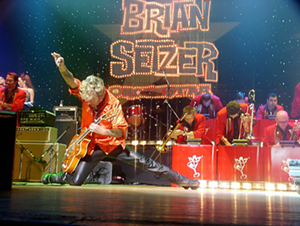 Photo: Naoaki Toyofuku
Briant Setzer Orchestra
When you think of the yuletide season, Rockabilly and Swing music may not be the holiday soundtrack that first comes to mind. However, amid the Christmas clichés of carols, hymns and moldy standards stands a more uniquely invigorating listening experience for this time of year that’s fueled by those two elements — the Brian Setzer Orchestra.

As visions of tattoos, hep-cats and switchblades swirl through your mind — you remember Brian Setzer's heyday with The Stray Cats in the ’80s — it may be understandably difficult to reconcile his pompadour and leather with the Santa season. But until you've heard "Jingle Bells" filtered through the sonic twang of a Gretsch guitar that is set to stun and leading an 18-piece Big Band extravaganza, please hold your judgment.

Setzer began his own holiday tradition way back in 1996 when he was asked to score some music for the movie Jingle All the Way. The collaboration inspired a mutant blend of Setzer's fret-worthy fireworks, rooted in his beloved ’50s Rockabilly, orchestral Jazz/Swing and rowdy Xmas cheer. All told, he and his Orchestra have released almost half a dozen holiday-themed records since then, and it's become a seasonal sensation that often comes to Cincinnati and the Taft Theatre. From Boogie Woogie Christmas back in 2002 through Rockin' Rudolph in 2015, Setzer’s Big Band gang has rocked many a blue winter moon.

For sheer musicianship, exuberance and chutzpah, this combo is hard to beat. Now recording on Surfdog Records, Setzer embodies the veteran, virtuoso guitar player — he’s simply one of the best — with enough showman's flash and charisma to dominate and easily lead two horn sections, a drummer, a stand-up bassist and a few female back-up singers dressed in their finest red and leopard-skin outfits.

It's a winter party where the master of ceremonies teases the crowd with snatches of "Stray Cat Strut,” and then caroms into "You're a Mean One, Mr. Grinch" with sleigh bells blazing — the Grinch never sounded so sweet. With Setzer grinning, jiving and swinging his wide-bodied Gretsch around like a dance partner during a BSO show, the audience usually responds by twisting in the aisles non-stop, and the party is on.