Bern’s best-known songwriting gig was as a supplier of tunes for Walk Hard: The Dewey Cox Story, the 2007 satirical comedy/biopic about a Johnny Cash-like figure aptly portrayed by John C. Reilly. 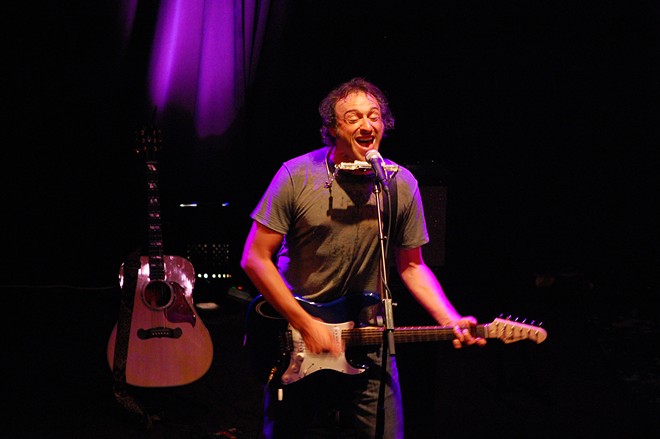 Dan Bern is a busy guy. The Iowa native and current New Mexico resident has created an astronomical number of songs over his three-decade run as a singer-songwriter. The 63-year-old troubadour has dropped more than 25 studio albums over that period, largely in the straight-ahead folk style of his idols Woody Guthrie and Bob Dylan, spewing forth a flood of pointed lyrics that tackle everything from George Floyd’s death to the ribald habits of Babe Ruth.

Bern’s best-known songwriting gig was as a supplier of tunes for Walk Hard: The Dewey Cox Story, the 2007 satirical comedy/biopic about a Johnny Cash-like figure aptly portrayed by John C. Reilly. Bern wrote dozens of songs for the film, a handful of which ended up in the final cut. Bern’s latest effort, the freshly minted Songs for Mr. Tony, might be his most curious project yet — a two-volume, 50-song ode to Tony Kornheiser, the crusty sports-columnist-turned-radio-and-television-talk-show-host.

Bern started by submitting baseball-themed songs before branching out to any sports-related tune he could muster. Kornheiser’s producer eventually agreed to use one of the songs on the program.

“Getting to be part of a show I love so much in this way continues to be a thrill every single time,” Bern wrote in the Bandcamp notes that accompanied Songs for Tony. “And getting a laugh out of Mr. Tony — that’s all any song could hope for.”

Bern’s dedication to the live setting is just as important, touring relentlessly over the years, with each appearance a chance to relay an art form he can’t help but share. He also was also one of the first artists to livestream shows when the pandemic had shut down in-person events.