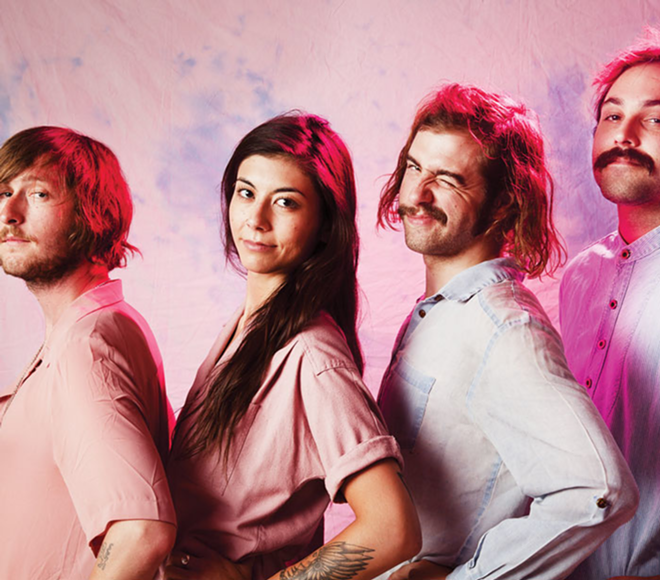 Mild High Club is the project of musician Alexander Brettin, a Midwestern-bred, L.A.-based Renaissance man who has recorded with the likes of Ariel Pink and Mac DeMarco. Brettin’s debut Mild High Club album, Timeline, was released in the fall of 2015 through Stones Throw Records, a legendary label known primarily for putting out some of the best Hip Hop, Soul and Funk of the past 25 years. But Mild High Club’s sublime music isn’t typical of Stones Throw’s other output, falling more into the Psych Pop/Rock realm (the imprint released Timeline through its sub-label, Circle Star Records).

Timeline is a patchwork of styles, which Brettin (who tours with a full band) combines to engaging effect. Though not exactly Electronic in nature, Mild High Club has the trippy, gauzy flow of Chillwave artists like Neon Indian, Toro y Moi and Washed Out, chiming harpsichord keyboards that recall the slanted early Psych Pop of The Zombies, a swagger that suggest the Glam Rock pioneered by T Rex, slinky guitar leads that echo George Harrison at his peak and a warm Pop sensibility that resembles Todd Rundgren and Harry Nilsson.

The end result is distinctly mesmerizing, and hearing Brettin discuss the music he grew up on gives a good sense of how he arrived at Mild High Club’s familiar yet compelling collage of sounds.

“The first album I got from my parents was Sgt. Pepper, and for the longest time I thought it was a children’s album, so there’s that,” Brettin told Lodown Magazine. “I also heard a fair amount of Steely Dan as a child, Pink Floyd, Sade, which at the time I wasn’t into but now she’s dope. My dad had, like, random compilations with songs like ‘Crystal Blue Persuasion,’ and Mitch Ryder and the Detroit Wheels. There was a lot of music in my house, but my parents were never musicians, they were just, like, cool.”