Moving Units plays from its album 'Collision with Joy Division' at MOTR Pub. 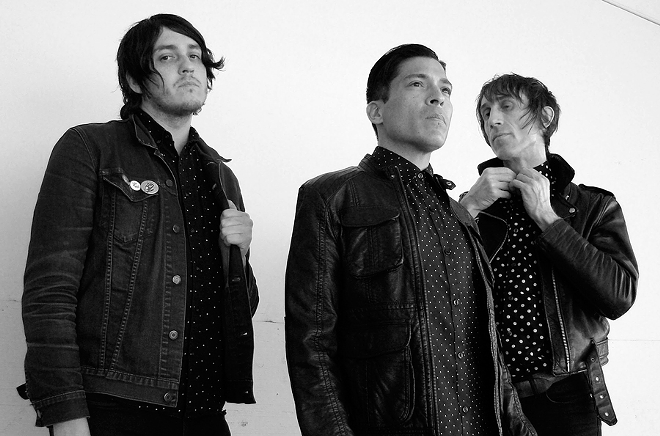 Photo: Jeff Jacquin
Moving Units
Since launching their rhythmic Dance Punk outfit 16 years ago, Moving Units has had something of a tangled history.

The Los Angeles quartet began in 2001 when guitarists Chris Hathwell and Blake Miller decided to work together after the breakup of their previous bands, Festival of Dead Deer and Spectacle, respectively. In relatively short order, the band released its eponymous debut EP and secured opening slots for the likes of Nine Inch Nails, Pixies and Blur, which sparked a good deal of label interest. Island imprint Palm Pictures signed the band and released its first full-length, Dangerous Dreams, in 2004.

Within three years, Moving Units had shifted to indie label Metropolis for their sophomore album, Hexes for Exes, which marked a shift to a more Electronic/Synth Pop-based sound, as evidenced by the album’s first single, The Fall-tinged “Pink Thoughts.” It would be another four years before the band’s next release, the Tension War EP, a self-issued affair featuring three new songs, a reinterpretation of “Pink Thoughts” as “Pink Redemption” and a pair of remixes. Shortly thereafter, the band announced through a Facebook post that Miller had left the band, but within months, Miller returned with a new lineup and played shows as Moving Units. After some initial disagreement, the original band members relented and allowed Miller to continue with his new lineup as Moving Units.

With a rejuvenated vigor, Miller and the new Moving Units folded all of their Dark Wave/Dance/Synth Pop/Indie Rock influences into 2013’s Neurotic Exotic and returned to the road with a vengeance. The band’s latest project is a straight-line connection to one of Miller’s earliest inspirations, the work of doomed vocalist Ian Curtis and his magnificent creation, Joy Division. After learning the band’s songs note-for-note, Miller and Moving Units began to play with arrangements and interject their own creative input, resulting in the just-released Collision with Joy Division.

The shows on the band’s current tour are divided into an all-Joy Division set followed by an originals set. So if you long to return to the dark days of 1979, or you want to understand what your parents are always babbling about, or you’re an old fan of Hexes for Exesor a new fan of Neurotic Exotic, Moving Units has a danceable solution for all of you.