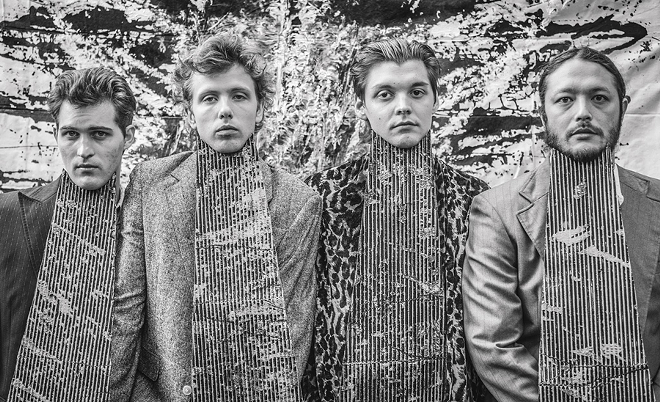 Photo: Benjamin Rouse
Muuy Biien
Muuy Biien is one of those rare bands that somehow forces its listeners to remember and revel in the past while simultaneously planting them firmly in the ever-present now and also making them think furtively about a future that seems to have been revealed only to them. It would be a pretty impressive feat for a road- and studio-hardened band that has been plying its trade for a decade or more, but Muuy Biien has been performing this musical sleight of hand for less than half that time.

In the Athens, Ga.-based quintet’s five-year history, it has recorded a trio of EPs and an equal number of full-lengths, including Age of Uncertainty, its recently released Psych/Surf/Glam/Pop/Punk/Prog masterwork.

The band lurched to life in 2012 under the guise of a raw lo-fi Hardcore outfit; the first four songs on its five-track EP Knife Fights were each less than a minute long, and the fifth sounded like Brian Eno making an Ambient recording with the Dead Kennedys. Muuy Biien took a giant leap forward on This is What Your Mind Imagines, recorded just five months after Knife Fights. Although it was still steeped in careening Hardcore fury, new sonic possibilities were being explored as melodicism and deliberation were added to Muuy Biien’s arsenal. On 2013’s No One is On My Side, frontman Joshua Evans expanded on the Ambient drone idea from the first release; although Evans was the only one to appear on the EP, it was still released under the band’s name.

The real advance came when the full band reconvened for 2014’s D.Y.I., a swirling mash-up of Muuy Biien’s Hardcore past with staccato stings of New Wave/Punk and washes of the droning atmospherics that have punctuated its catalog. The band’s efforts came to blazing fruition on last fall’s David Barbe-produced Age of Uncertainty, where Muuy Biien slowed the pace but never let up on the intensity with a sonic collage poster featuring potent jolts of Depeche Mode, The Teardrop Explodes, Placebo, Blur, Echo and the Bunnymen, XTC, The Rolling Stones, The Doors and others in a visceral 30-minute roller coaster tour of the past three decades.

The beauty of Muuy Biien’s presentation is that the band members are too young to claim any of those reference points as firsthand influences, so the sounds Frankensteined into existence have been filtered through completely contemporary sensibilities that combine for a singularly compelling soundtrack that leaves the astute listener begging for more.