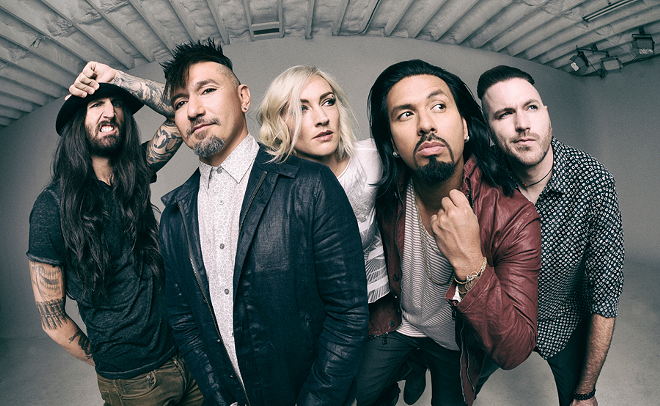 Photo: Steve Sergent
Pop Evil
Given the struggle and tumult that Hard Rock quintet Pop Evil has endured to reach the level of success they’ve achieved, it might have been tempting fate just a little to name its most recent and best album Up. You know what they say about up — only one way to go from there.

For Pop Evil, that down came last April when drummer Josh “Chachi Riot” Marunde opted out of the band for an opportunity that allowed him more family time. While the split was amicable — Marunde left the door open for future cameo or reunion appearances — Pop Evil now had an immediate need for a hammer, especially considering they were in the middle of the touring cycle for 2015’s Up, the most successful album in the band’s 15-plus year history.

The remaining band — vocalist Leigh Kakaty, guitarists Nick Fuelling and Davey Grahs and bassist Matt DiRito — put out the word that they were considering filling their vacancy with a female drummer. Friends put them in touch with former McQueen drummer Hayley Cramer, who floored the band with her power and authority, and she was welcomed to the fold as Pop Evil’s third drummer. So far, the chemistry between Cramer and the band has been flawless, and Pop Evil fans have embraced the band’s newest member with unbridled enthusiasm.

For the Muskegon, Mich. quintet, Up was the payoff to a long, hard climb that began when the band formed in 2001. Although it dropped a couple of releases in the mid-’00s, they were primarily self-recorded demos; Pop Evil’s first actual studio album, 2008’s Lipstick on the Mirror, came after a seven-year dues-paying run of terrible club gigs. That album earned the band a deal with Universal, which paid for the band to remix and remaster it for a re-release the following year.

The Universal deal soured quickly, and Pop Evil shifted to indie label eOne for its next album, 2011’s War of Angels. But it was 2013’s Onyx that proved to be the band’s big breakthrough, cracking the Top 40 of the Billboard 200 and charting three consecutive No. 1 singles on the magazine’s Mainstream Rock chart. In 2015, Up bested its predecessor’s album numbers, hitting No. 25 on the Billboard 200, Top 5 on the Independent and Hard Rock Album charts and Top 10 on the Top Rock Albums chart.

Through all of this, Pop Evil maintained a constant road presence as an ass-kicking opener and an always-reliable headliner. Now, Cramer’s presence in the lineup may have revitalized the band into some of the best performances of its career.