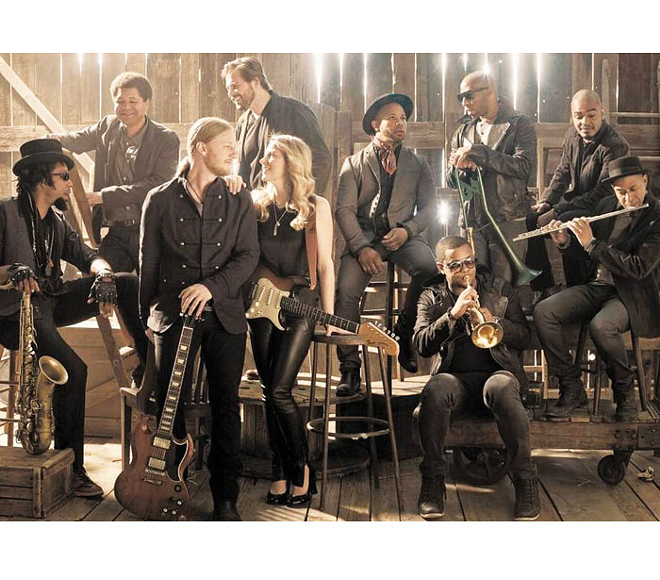 It’s been said many times being in a Rock band is a lot like a marriage, but what if your Rock band was your marriage? For Susan Tedeschi and Derek Trucks, that theoretical supposition is a real-life circumstance. For nearly a decade, guitarists/vocalists Tedeschi and Trucks have navigated the normal pitfalls of married life while simultaneously managing the often treacherous peaks and valleys of the studio and road, first with Soul Stew Revival and then with the Tedeschi Trucks Band.

Although almost a decade apart in age, Tedeschi and Trucks share astonishingly similar life experiences. Both were musical prodigies, contributing to actual working bands as teenagers. Tedeschi understudied as a vocalist for a Broadway show at age 6, sang in bands at 13, formed her own at 18, graduated from the Berklee College of Music at 20 and learned Blues guitar at 25. Trucks learned guitar at age 9, jammed with Buddy Guy and toured with the Allman Brothers Band at 12, formed his own band at 18 and joined the Allmans at 20. In 1999, Tedeschi’s self-named band opened for the Allman Brothers, where she and Trucks met and fell in love. They married in 2001.

For six years, the pair maintained separate bands, but in 2007 they formed Soul Stew Revival together, renaming the outfit Tedeschi Trucks Band in 2010 after announcing the shelving of their separate projects. Tedeschi Trucks Band’s first album, 2011’s Revelator, won the Grammy for Best Blues Album, and the pair have gone from strength to strength ever since. Their debut and the subsequent releases — 2013’s Made Up Mind and this year’s Let Me Get By — have all cracked the Top 20 of the Billboard 200 album chart.

Let Me Get By, the band’s debut for Fantasy Records, marks the first album written entirely within the Tedeschi Trucks Band family; guitarist Doyle Bramhall II is the only non-band member to contribute to the writing. Let Me Get By is a master class in style assimilation and translation, as Tedeschi, Trucks and their talented crew begin with a framework of electric Blues and fold in elements of Stax and Muscle Shoals Soul and Pop to create a warm and personal style that finds them nodding in many directions while remaining unique, engaging and authentic. And married.