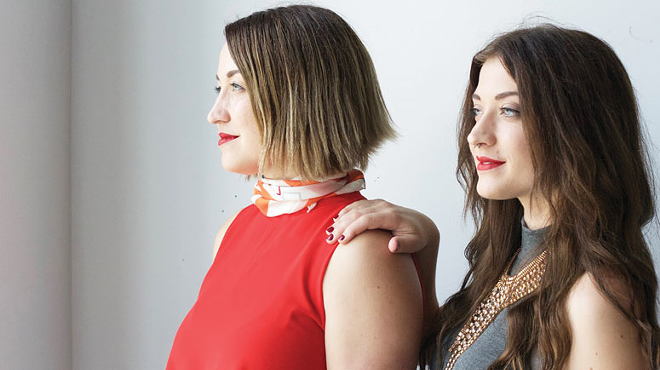 Photo: facebook.com/thehottmansisters
The Hottman Sisters
Music history is littered with popular bands featuring siblings, and the duality of that faction of groups has the makings of an interesting psychological case study. The innate chemistry between brothers and/or sisters often becomes more intense when coupled with a deep, shared passion for music, resulting in a natural and sometimes fruitful creative relationship. But there is also the possibility of contention within that relationship, which can lead to the fracturing of familial bonds and also the self-destruction of the shared project. Maybe getting irritated by people you spend so much time with pursing creative endeavors — mixed with stubbornness, pride, ego and greed — isn’t exclusive to siblings, but looking at high-profile examples (which have to deal more with the added pressures of money and success), it sometimes seems like the odds of falling out with your bandmates are higher when you’ve literally known them all of your life.

Another interesting aspect of this imaginary case study is the difference between musical partners who are men and ones that are women — the majority of prominent instances of high-drama, band-destroying sibling rivalry in popular music are attributed to musicians who are brothers. Heart’s Ann and Nancy Wilson or the sisters in Dixie Chicks probably don’t always get along, but battles between brothers are the stuff of music legend (see: The Kinks, The Black Crowes, Oasis, etc.). Perhaps it’s just another example of how men are better than women.

Those tales of conflict may make the music history books, but the artists wouldn’t have gotten that far if it wasn’t for the more productive first part that resulted in the initial art their bond created. That’s the phase in which Nebraska’s Jessica and Heather Hottman appear to be. Music has been a part of the Omaha-based sisters’ relationship all of their lives; growing up, there was church singing and musicals, a shared love of ’90s Pop and harmonizing for fun with Mom and their other sister. After forming a band in college, the pair developed a desire to pursue music as a career, leading to the post-collegiate birth of The Hottman Sisters, which is not a duo act but a band, featuring Jessica on guitar/vocals and Heather on vocals/keys, plus a rotating rhythm section.

The group’s sound is self-described as Indie Pop (and the Sisters scored a nomination for “Best Indie/Alternative Band” at the 2016 Omaha Entertainment and Arts Awards), but it also has a rootsy Americana streak running through it. Their strongest suits are more proof of the aforementioned chemistry unique to siblings — sturdy songcraft and the atmospheric ambiance created by the sisters’ impeccable and imaginative harmonies. The Hottman Sisters built a reputation and fanbase by performing regularly in their hometown, drawing frequent coverage in the area’s local press. That coverage picked up last summer with the release of debut EP This Two, and it will likely spread now that The Hottman Sisters’ have begun touring across the country.

And since there are sisters running the show, the chances of the band imploding before their Cincinnati visit after a drunken fistfight in Lexington the night before are extremely low.