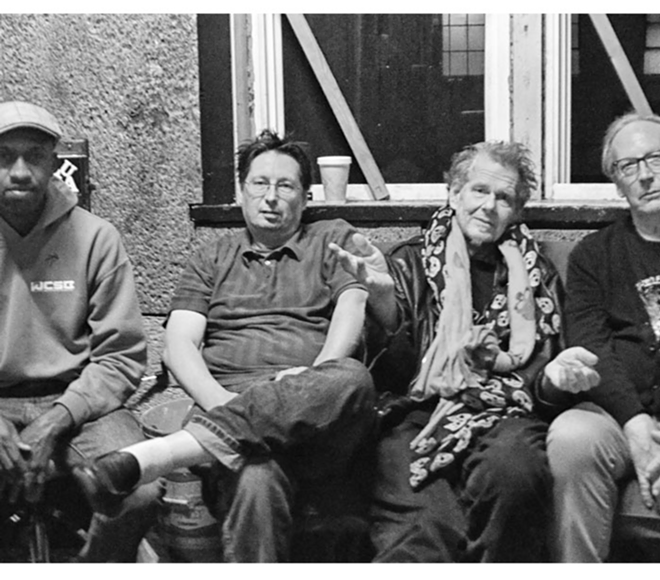 If you draw a blank at the mention of the Cleveland Art-Experimental-Noise-Proto-Punk band X_X, that’s what its founder, John D. Morton, wants.

That’s because the band’s name is pronounced “X-blank-X,” and it has been known to insert some other name into that blank space to fit the mood or project of the moment. It’s the kind of confounding, confrontational gesture one expects from a band led by a visual/performance artist.

For instance, X_X used the name X (The Jazz Destroyers) X for their new record, Albert Ayler’s Ghosts Live at the Yellow Ghetto. It is the group’s first new album since… well, a case can be made it’s their first ever.

In the band’s heyday in the late 1970s, when it was a prime Avant-Garde Rock provocateur in a city known for them, it managed but two singles. Morton had turned to X_X after his pioneering band electric eels.

But art-inspired Punk has proven to be one of Rock’s great creative movements, which has inspired archivists around the world to search out forgotten bands. And in 2014, a Finnish label released all the old X_X music it could collect — old singles, live tapes, etc. That prompted Morton to reunite the band, begin touring and record for a label, Smog Veil Records, interested in historic Cleveland music.

While it’s named for the Cleveland-born Free Jazz hero, Albert Ayler’s Ghosts is closer to The Fall-vs.-Captain Beefheart than Ayler. It has just eight songs — some mere snatches — and is about 20 minutes total. Yet its combination of grand guitar noise, quiet narration, Bowie-esque Pop and deconstructed covers of other songs like Dylan’s “Subterranean Homesick Blues” demand repeated listening.

This show, then, is a major event.