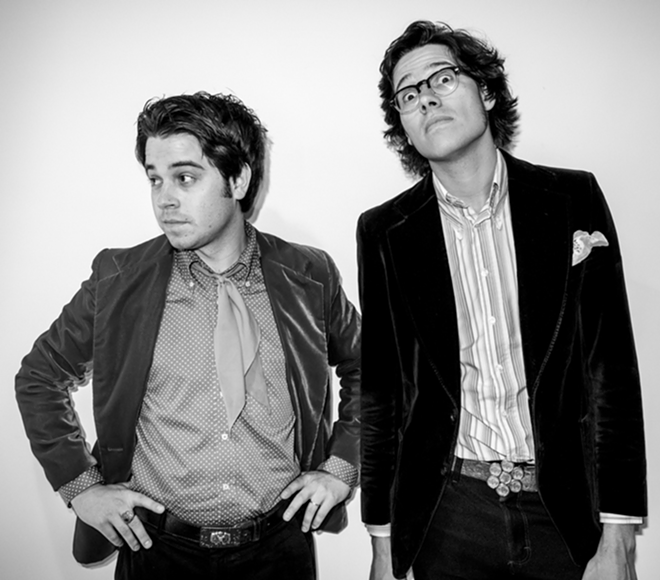 If you were among the multitude of this year’s MidPoint Music Festival patrons that crammed themselves ass-to-elbow at Mr. Pitiful’s on the festival’s first night to witness the Cincinnati debut of Steelism, you were treated to a sweat-drenched show of hair-raising proportions. You’re not going to find a more unlikely success story than this infinitely talented Nashville, Tenn., quartet, fresh off the September release of their first full length album, 615 to FAME.

Steelism’s improbable formation began with Canton, Ohio, guitarist Jeremy Fetzer and Essex, England, pedal steeler Spencer Cullum Jr., who met while backing Nashville chanteuse Caitlin Rose on a European tour. Bonding over their mutual love of instrumental Rock, Pop and Soul (the Ventures, Booker T. & the MGs, Pete Drake, etc.) and soundtrack geniuses like Ennio Morricone and John Barry, Fetzer and Cullum began goofing around with riffs at soundchecks. The pair’s stated dissatisfaction with a string of oddly inappropriate opening acts on the Rose tour led the duo to take the slot themselves and Steelism was born.

After a handful of 7-inch singles and a critically acclaimed 2012 EP, The Intoxicating Sounds of Pedal Steel and Guitar, Steelism set to work on its debut full-length, with recording time split between Nashville and Muscle Shoals, Ala.’s legendary FAME Studios. Although some assumed the title 615 to FAME is a nod to the Western film 3:10 to Yuma and a boast about their imminent success, the album’s title is actually a reference to the two locations it was recorded — Nashville’s area code and the iconic Alabama studio.

In the studio and especially on stage, Steelism runs through its blistering originals and brilliant covers with a palpable sense of reverence and a breakneck intensity. The band’s take on the James Bond theme nearly leveled Mr. Pitiful’s. Careening from Surf Rock to Stax Soul to Spaghetti Western to rootsy Country, Cullum, Fetzer, bassist Michael Rinne and drummer Jon Radford should post notices warning people with heart problems or weak constitutions to enter at their own risk.

And a head’s up to club owners: Make sure the hinges on your doors are sturdy, because Steelism is likely to blow them into the street.