If you spend the weekend watching Taylor Swift's short film, "All Too Well," and explaining the lore of the scarf to all of your idiot friends who aren't Swifties, this news from Shake It may interest you. 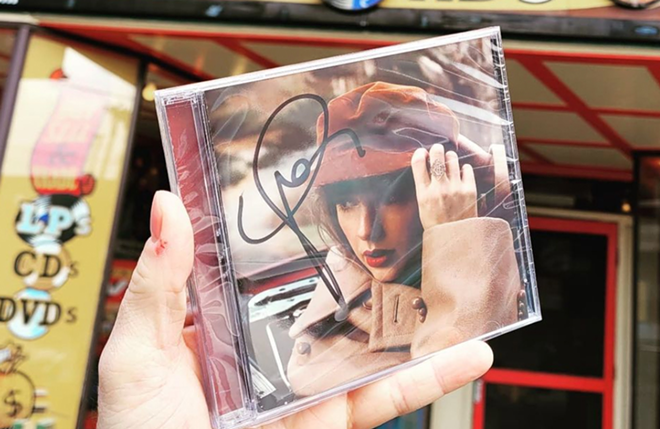 If you spent your weekend watching and rewatching Taylor Swift's short film, All Too Well, and explaining the lore of the scarf to all of your idiot friends who aren't Swifties, this news from Shake It Records may interest you.

Queen T signed some copies of the just-released Red (Taylor's Version) and sent it to the Northside shop.

In a social media post, Shake It says they have a "very" limited amount and the CDs will only be sold in-person with a limit of one per person. No holds.

This isn't the first time Swift has bestowed such a gift on local fans or the local shop.

In support of her record folklore, which she surprise-released in July 2020, Swift sent off signed CD copies to independent record stores across the country. News began spreading on social media that various local record stores had gotten their hands on this precious Taylor treasure, including Shake It Records in Northside.

The folks at Shake It shared a photo of signed CD copies of her lauded — and record-breaking — eighth studio record, and her first Indie Rock-sounding entry, co-produced by Swift, frequent collaborator Jack Antonoff, and the National's (and hometown hero) Aaron Dessner.

The records obviously sold out the same day — as we're sure the Red CDs will as well (if they haven't already).

The super sweet gesture is par for the course for the ever-generous Swift, who made an undisclosed donation to support every full-time staffer at Nashville's premier independent record store, Grimey's, which was forced to close during the pandemic.

If you want to watch All Too Well again and get frothy about how Jake Gyllenhaal did Taylor dirty, it's embedded below.