In an interview, singer-bassist Curt Smith talks about the new album, recording during the pandemic and Donald Trump. 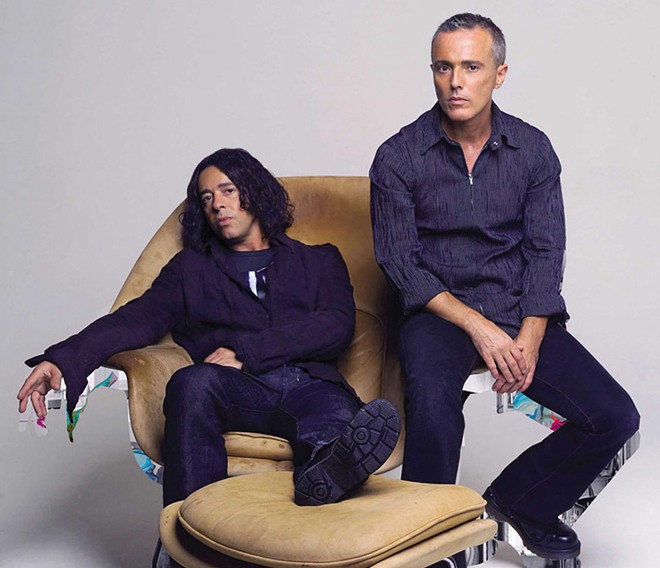 Photo: BB Gun Press
Tears for Fears will kick off a new tour at Cincinnati's Riverbend Music Center on May 20.

After Tears for Fears' singer-guitarist Roland Orzabal and singer-bassist Curt Smith parted ways in the early 1990s, the duo set aside their differences and reunited in 2000 for a tour. They would then make an album together in 2004. While that album, Everybody Loves a Happy Ending, celebrated their return and was generally well-received, it didn’t pave the way for new material.

The band has just released The Tipping Point, its first new studio album since Everybody Loves a Happy Ending. To celebrate, Tears for Fears is hitting the road, including a tour-opening show at Cincinnati's Riverbend Music Center on May 20 with guest Garbage.

"Everybody Loves a Happy Ending was easier [to make]," says Smith via phone from his Los Angeles home. "I think that was more of a celebration of us getting back together again. We recorded it in L.A., and we were very relaxed about it and saw it as a continuation of [1989’s] The Seeds of Love to the extent that it was unfinished business. It was more of a celebration of us working together again. It was an easy process, and we did it on our own. We recorded in the Valley in L.A. It was a pleasant experience."

Smith describes The Tipping Point as "a lot more painful."

"Having said that, from the pain can come something good," he explains. "Consequently, to me, this album has more depth and is a lot better and will last a lot longer. We used all that pain and what was going on around us to make something of value. The value of Everyone Loves a Happy Ending was the joy of it."

A few years back, the band had recorded an entirely different studio album that was slated to come out on Warner Bros. But once they completed it, they realized it wasn’t representative of their sound, so they scrapped it. They even went so far to buy the music back from Warner Bros. to ensure it wouldn’t see the light of the day. After revisiting it just to see if anything was worth salvaging, they decided a few songs weren’t so bad after all. They kept five tunes from it and set about writing and recording new tracks.

"When Roland and I sat down at the end of 2019 and talked about whether there was a path forward and whether we wanted to finish the [Warner Bros.] album, we realized we wanted to finish it," says Smith. "We went back over the songs and ignored the production. We wanted to see if there were songs that had the depth and meaning that we required. We agreed on five songs that we though would fit. After we decided on the five songs and the way forward was for the two of us to sit down and write on acoustic guitar. We hadn’t done that since [1983's] The Hurting. We had left our record company and left our management. It was just the two of us. We wanted to keep it that way until we finished the album. We came up with 'No Small Thing,' which is the opening track. When that song came, we knew it was what we had to do. We had a very definite idea about what the record should be like."

Recording during the COVID-19 pandemic presented its own set of problems. The two worked in Los Angeles, but at one point, Orzabal went back to England, and they had to send files back and forth. At the end of August, Orzabal returned to the States and the band finished the album before Christmas.

The "depth" that Smith references is reflected in songs such as the moody title track, a tune with reverberating synths and cooing vocals that references the death of Ozabal’s wife.

"I think our best material is when we’re mining our own emotions," Smith says. "The death of [Orzabal’s wife] was a traumatic event for Roland specifically. He then had his own health issues. To a lesser degree, [it impacted] me because Caroline was a friend of mine since age 14. Then, of course, you start questioning your own mortality. All of those feelings came into it. The pandemic lent a new meaning to some of it. Tracks like ‘Please Be Happy’ or ‘The Tipping Point’ talk about death. A lot of people were going through that during the pandemic. It took on a new poignancy and wider meaning because other people were feeling that sense of loss. In that sense, it became more general than specific."

"We were both brought up by women with absent fathers," explains Smith when asked about the band's sensitivity toward women's rights. "We know women’s strengths. We know men’s weaknesses. In that sense, we are more likely to understand it. The song is a homage to my daughters. Having gone through Donald Trump in America, who in my personal opinion epitomizes toxic masculinity, [the song is about] hoping that [my daughters] grow up in a world where women have equality in politics, in the workplace and on every level."

The album isn’t without its "Everybody Wants to Rule the World"- and "Shout"-like anthems. "End of Night," a tune with heavy percussion and an Imagine Dragons-feel to it, comes across as a truly exuberant number.

"It’s a joyful song," says Smith. "That and ‘Rivers of Mercy’ talk about redemption and the desire for redemption. It’s why the album is called The Tipping Point, and it’s very much a desire for the center to come back again and not to be extreme right or left, and I do blame social media for fanning the flames of anger. There seems to be no center anymore. That’s what gives everything the balance. You won’t get any balance from extreme right or extreme left."

The live shows will find the band drawing from a career that stretches back 40 years, and Smith says the new songs should mesh well with older tracks.

"We’ve rehearsed and played three of them live doing TV shows, and they fit in fantastic with the older material," says Smith. "They’re as strong and sound fantastic live. In that sense, it’s a joy for us, and on a selfish level, it’s great to have new material. We won’t know how they fit in until we play the first shows. You can do a running order in rehearsals, and it will sound good to you, but you need the audience reaction. The first week is a little hairy, but there is an excitement to that. We’re flying by the seat of our pants to an extent, but I’m looking forward to it and seeing how the audience responds."

Below, watch the video for the Tears for Fears song "No Small Thing" from the new album The Tipping Point.