Next weekend in Newport, Ky., Lloyd will also perform at Southgate House Revival and sign his memoir at Newport on the Levee. 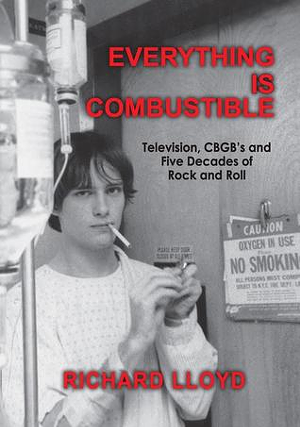 Cincinnati is smack dab in the middle of a major opioid epidemic. While some people might have a hard time recognizing it, those in the local music scene need look no further than their own extended circle of friends and acquaintances. Everyone knows someone who is struggling, has struggled or has succumbed to their struggle. It’s a downright depressing world out there right now and it’s one that Television’s Richard Lloyd wants to help change.

Television didn’t just show up at the pinnacle of New York’s Punk scene, they were there from the very beginning. Having formed in the early ‘70s, the band was artier and more practiced than some of its more primitive and rowdier peers. The group played Punk ground-zero CBGB before most of the other biggies who circled through the club and changed music (Ramones, Patti Smith, Blondie, etc.) and the band put out music that showed an instrumental prowess — particularly in the guitar work of Lloyd and Tom Verlaine — that wasn’t always found in the others’ music. Television was an influence on the influencers of the NYC scene, and remain so more broadly to this day (The Strokes wouldn’t have sounded like The Strokes without Television). While the band never reached the kind of success some of their contemporaries enjoyed, no one doubts Television’s crucial place in “Alternative” music history.

During Television’s time together, Lloyd’s youthful rebellion began to get out of hand. The guitarist owns up to every step and misstep in his life, including his days of alcoholism and slide into heroin abuse. It’s his relationship with heroin that cost him his original attempts at a post-Television solo career. At one point in his life, Lloyd even recalls falling asleep during a meeting with record executives which, no doubt, played a big part in how his first solo album, 1979’s Alchemy, was handled.

Many of Lloyd’s best and most harrowing drug-influenced and substance-induced stories can be found in last year’s memoir, Everything is Combustible. The book starts Lloyd’s story from the moment his parents met, then trails beautifully along his childhood and high school years (when he would show up to school with only his guitar and eventually dropped out — not once, but twice). The book then details his days of hanging with everyone from Jimi Hendrix (pre-Television) to Keith Richards (post-Television). And, of course, alongside the stories of his addiction struggles and recovery, he walks fans through his time with Television and at CBGB in the book.

During his visit to Greater Cincinnati, Lloyd will make several stops. His first public appearance is a concert at Southgate House Revival Friday night. Saturday, he’ll tell some of his amazing stories and sign books at Barnes & Noble at Newport on the Levee at 1 p.m.

Lloyd discussing his book with another CBGB-affiliated legend, Chris Frantz.

This time around, one of the main purposes of Lloyd’s visit to Greater Cincinnati comes in the form of a private talk to a select group of physicians that make up the Ohio Society of Interventional Pain Management Physicians. On Saturday morning, Lloyd will discuss his heroin use and its effects on his life during and after recovery with the organization’s three-day conference in conjunction with the Kentucky Society of Interventional Pain Physicians. (He’s also slated to perform a riverboat cruise welcome reception Friday evening, open to conference attendees only; his Southgate House Revival show is starting at midnight to accommodate his schedule.)

If Richard Lloyd’s discography (he’ll add to it this fall with a new album on Plowboy Records) and his gorgeous memoir are any indications, all three stops should be enlightening and enthralling.