The Psych Rock band from Houston will play the Andrew J. Brady Music Center on April 29. 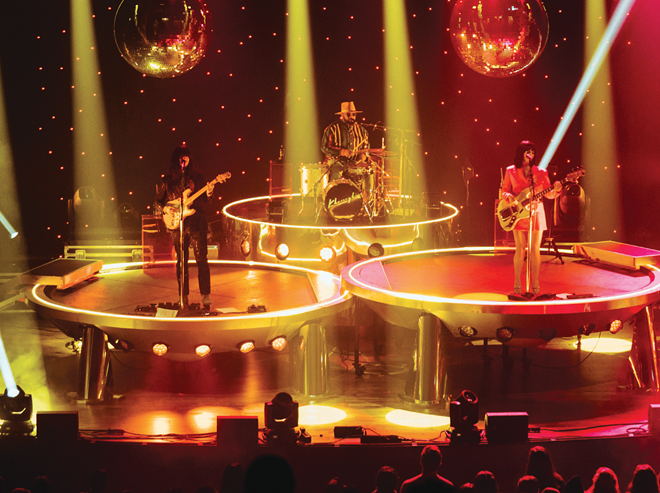 Until recently, Khruangbin hadn’t played a show in well over a year. Nor had the Houston Psych Rock trio done any of the songs from their 2020 album, Mordechai, onstage.

So before bassist Laura Lee, drummer Donald Ray “DJ” Johnson Jr. and guitarist Mark Speer were able to return to the road in late 2021, they had to put in some extra rehearsal time to feel like they were back in the swing of things as a live band.

“We had to come back after 600 days of not playing a show and, for the first time, play songs that we’ve never played before, not to mention songs we haven’t played in almost two years,” Lee says in a recent phone interview

Khruangbin not only got on the road, but also returned as a headlining act.

The tour that began last year is continuing into this summer, and visiting such notable venues as New York City’s Radio City Music Hall and the Ryman Auditorium in Nashville before moving up to amphitheaters this summer. Khruangbin stops by the Andrew J Brady Music Center on April 29.

It’s a sign of the growing popularity of the trio, which was formed in 2009 by Johnson and Speer, who played in the St. John’s Methodist Church Gospel band, and then bonded with Lee over a shared love for Afghan music.

Their sound is created by combining music from around the world, spinning together Thai Funk, Jamaican Dub Reggae, Iranian and East Asian Pop with American R&B, Funk and Soul to create a distinctive original sound.

“A lot of it happens naturally, it’s what we listen to,” she says. “I was in England for four years. By the end of it, I had a little different accent, a different cadence to how I’d speak. You naturally pick up on things that you surround yourself with.”

But the key to Khruangbin is not reproducing any of that music, but letting it come through as clearly read influences on the sound.

“We want to be able to go to Thailand and Ethiopia one day, play our songs and have them make a connection with the people there — that they can hear their music, but it’s not a copy,” Lee says. “We’re trying to create something unique and part of that is it can’t be just one thing. With Mordechai, we were trying to pull in everything, as much as we could.”

Johnson says copying songs, phrases or styles might not be heard as lifeless appropriation by listeners who aren’t familiar with the original sounds, but reproducing others’ work doesn’t ring true for him, Lee and Speer.

“When you’re an artist, you know when you do something and it’s too referential, it’s not really you,” he says. “We’re very conscious of that. A lot of people think you go into the studio and jam and that stuff just comes out. It doesn’t. It’s done with a lot of thought. Sometimes we’ll analyze every single note before we record it. That’s how deep it can get, how microscopic it can get.”

Khruangbin has released three albums: 2015’s The Universe Smiles Upon You, 2018’s Con Todo el Mundo and 2020’s Mordechai. All of them have been recorded in a barn west of Houston.

“It all starts with bass and drums,” Johnson says of the recording process. “Drums go in first, the bass follows, that’s the foundation. In terms of the framework, Mark is our singer. Even though he’s playing the guitar, he’s interpreting a vocal. The vocal lines are tonal, they create a melody.

“The songs are really simple in that sense,” he continues. “There’s the rhythms and beat of the drums, heavy Reggae-inspired bass and the melody on top.”

Translating the Mordechai songs to live performance is a challenge Khruangbin has had to work at, first in rehearsal, then onstage as the group brings its acclaimed “you have to see it to get it” live show on the road.

“I had no idea we’re considered such a big act to see,” Lee says. “I’m very proud of that. The record is forever. The shows, for me, have a special quality.
It happens one time. You experience it with all these special moments that will never happen again. Creating those moments is a real special thing for us.”