The band plays the Taft Theatre's Ballroom on Thursday, Nov. 21 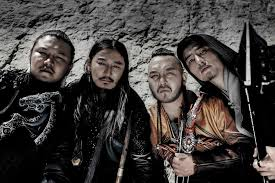 The latest stylistic mash-up taking the heavy music world by storm is the unlikely combination of traditional Mongolian throat singing and instrumentation and the guitar/bass/drum structure of Hard Rock and Metal concocted by The HU, a Mongol quartet that offers a message of nationalistic and cultural pride. One track from their newly released debut album The Gereg is “The Great Chinggis Khaan,” a sonorous ode to the feared Mongol conqueror underpinned with a thunderous, soul-shaking soundtrack.

The four primary members of The HU initially came together in 2016 and began releasing singles with accompanying videos two years later. The band’s first two videos, “Yuve Yuve Yu” and “Wolf Totem,” have over 50 million combined views, with “Wolf Totem” hitting the top of Billboard’s Hard Rock Digital Song Sales chart, making The HU the first Mongolian band to reach No. 1 on any of Billboard’s sales rankings. Riding the wave of success, 2019 has been The HU’s breakout year. The band was even recognized by Mongolian President Khaltmaagiin Battulga for promoting Mongolia to a worldwide audience.

Currently in the midst of their first North American tour (which includes several sold-out dates, including the Cincy stop), The HU’s core members — Gala, Enkush, Jaya and Temka — play a variety of traditional Mongolian fiddles, lutes and flutes and deliver their impassioned lyrics by way of a contemporized Rock version of throat singing, with the Metal/Hard Rock aspects delivered via a more typical guitar/bass/drum/percussion format.

You won’t understand a word of The HU’s presentation but you won’t doubt their sincerity or authenticity for a moment.

The band plays the Taft Theatre's Ballroom this Thursday, Nov. 21 with guests Crown Lands. The show is sold out.