Amos is on a tour that brings her to Cincinnati's Taft Theatre on May 24. 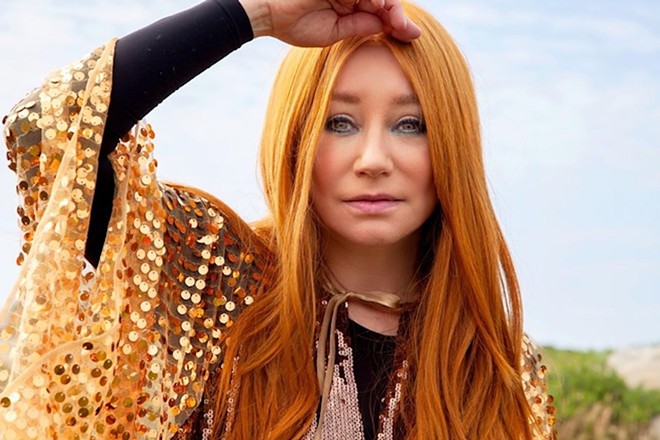 Photo: provided by Girlie Action
Tori Amos will perform at Cincinnati's Taft Theatre on May 24.

The last two years have been particularly difficult for singer-songwriter Tori Amos, a real road warrior who had to cancel two tours because of the ongoing COVID-19 pandemic. She recognizes that she hasn't been the only artist severely impacted by the industry shutdown.

"I think if you ask most live performers, whether it’s music people or theater people — and I realize that everyone was dealing with an aspect of COVID with the illnesses and the losses — we couldn’t work for two years," says Amos in a phone interview from Florida, where she was prepping for a tour that brings her to Cincinnati's Taft Theatre on May 24. “That’s never happened to me, and I turned pro at 13. It’s been the longest that I haven’t played for people.

"We didn’t have a how-to book for this. Yes, a lot of people who were fortunate enough to be able to record did that. It’s not the same if you are a live performer, and that is your life. You can’t really play the Royal Albert Hall from home," Amos continues. "Playing live and having that experience is an experience, and it’s different than karaoke at Tori’s piano bar in Cornwall, England."

Amos says her daughter who was attending college in London arrived at Amos’s home in Cornwall and stayed with her and her husband through the first era of the pandemic. That stage of things went “pretty good,” as Amos puts it.

"You learn how to work together and how to have meals and how to do this," she says. "You couldn’t go anywhere except grocery shopping. I’m not sure what it was like in Ohio. For the first window [of the pandemic], we coped. I did a virtual book launch. We did all that from the recording studio."

During COVID restrictions that took place in winter of 2020, Amos began to feel stressed. It was at that point that she began work on the songs that would become her new album, Ocean to Ocean.

"I was like, 'Is this nightmare ever going to end?'" she says. "I had kicked two tours down the road. I had never done that before. I never cancel shows. I had to write myself out of a particularly dark space. I had started writing to get myself out of some grief."

"I knew I had to fight that despondent monster that can sit on our shoulder," Amos explains. "I knew I had to fight it, but I didn’t have the energy to fight it, and I didn’t know how to fight it. I started looking up great fighters. I was drawn to Bruce Lee. He started talking about being like water. The advice from him was completely different than what I thought I would get from a master fighter. A side of your brain opens up that hasn’t been opened before because I hadn’t thought a fighter would think like that. The fluidity of what water can do and how it can be so calm and completely split rocks if it wants to and make an opening in a cave."

"That started to get me outside and into nature even though it was cold, and it was winter," she adds. "I started to go out there. I realized that Mother Earth was not locked down. She was busy. She was transforming herself from winter into spring. I said, 'Learn from her, Tori. That’s what you need to do.'"

After that, the songs came fast and furious. A documentary about polluted waterways inspired the album’s title track, and Amos addresses the strain the pandemic placed on relationships in "Addition of Light Divided."

"I was really bonding with my niece in New York City, who is very close to my daughter," says Amos. "She was dealing with the lockdown too. We see each other for the holidays and were seeing each other less because of the restrictions. I began to realize that twentysomethings were at a time in their life when they are going on adventures and having these experiences, but the restrictions stopped them from doing it. This song was acknowledging what she was going through and her experience of the lockdown and how some of the relationships did not survive it. My husband and I work together all the time. For good or ill, we know each pretty well."

"Spies," a mid-tempo lullaby for Amos’s daughter, benefits from a funky bass riff and echoing layers of vocals.

"It was strangely hot in England in July, and my daughter was texting me that bats were chasing her," Amos explains when asked about the track. "She would not go in her room. The bats come in, and I needed to write her a lullaby, but the ones that work at 6 [years old] weren’t working for a 21-year-old. I needed to come up with something different, and I came up with ‘Spies’ to get her into a different headspace."

Drummer Ashe Soan and bassist Jon Evans will accompany Amos for the U.S. trek that brings her to Cincinnati, and Amos says she's thrilled to be back on the road with the two talented musicians.

"When I played the first show of this tour in London a few weeks ago, feeling the audience and feeling the reaction was just overwhelming," she says. "I can’t even describe how precious it was and how grateful I was to play to a live audience again. We’re really having a blast playing together on this tour."