Merrill Garbus and Nate Brenner come to Taft Theatre's Ballroom in support of Tune-Yards' latest album, 'I Can Feel You Creep into My Private Life' 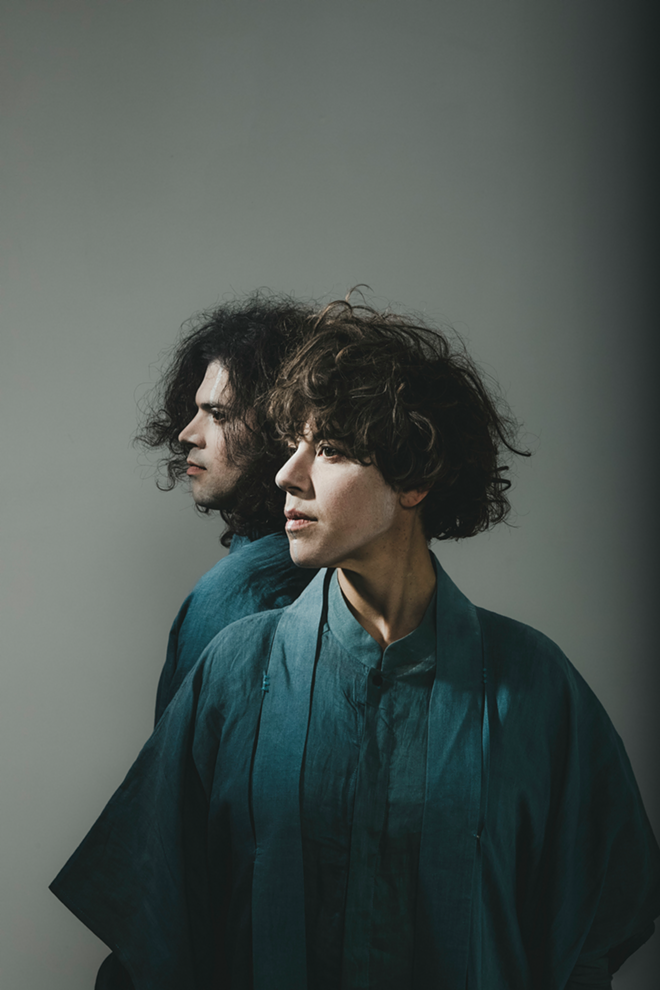 Merrill Garbus is in a constant state of evolution and self-reflection, a process that can’t help but infect everything she does as the front woman and driving creative force behind Tune-Yards. What began as a one-person project more than a decade ago is now a full-fledged collaboration with bassist Nate Brenner (who also happens to be her significant other off stage) and a current live unit anchored by drummer/beat-master Hamir Atwal.

For the uninitiated, Tune-Yards employs a variety of musical and cultural elements — from Appalachian Folk and slanted Pop to African rhythms and Electronic music — into an eclectic, hook-heavy mix. At the center is Garbus’ voice, a versatile and improbably dynamic instrument that can move from low-key crooning to full-on wailing, often within the same song.

Tune-Yards first made an impression with 2011’s w h o k i l l, a groove-centric effort influenced by Garbus’ move from her native New England to Oakland, Calif., and that somehow, in the words of Robert Christgau, “contains in one person the finest attributes of Captain Beefheart and Phoebe Snow.” It deservedly topped The Village Voice’s annual Pazz & Jop poll and was followed by 2014’s Nikki Nack, a slightly more streamlined set of songs that grew the band’s fan base even more.

Now comes the freshly minted I Can Feel You Creep into My Private Life, a record influenced as much by the rise of Black Lives Matter and Trumpism as Garbus’ beloved African polyrhythms. The album’s most curious song is “Colonizer,” which features Garbus’ singular vocal delivery of lines like “I use my white woman’s voice to tell stories of travels with African men,” “I turn on my white woman’s voice to contextualize acts of my white women friends” and “I smell the blood in my voice” over EDM beats and catchy, pulsating bass lines from Brenner.

Garbus recently took a few minutes out of her busy schedule to discuss Tune-Yards’ latest release and how it couldn’t help but be impacted by our specific cultural moment.

CityBeat: How has your songwriting process changed over the years?

Merrill Garbus: It’s kind of a real mix. I would say I live my life first, by which I mean that in the past few years I’ve come to accept that I’m a musician. I always feel like I’m living my dream and it can’t possibly last. But, finally, I thought I should probably act like this is my job: go to the studio every day to write songs and work on music and work on getting better and take voice lessons. For a while I was taking Haitian drum lessons and dance lessons. I really wanted to work on my craft. So in that way, what happened with this album and the album before this was that I was living my life here in Oakland and being witness to and participating in what happens here and writing every day a lot of words on pages of paper. That’s really how it happens; it’s kind of like this big stew that gets stirred up and we work on it long enough and eventually we have an album.

CB: I read that you were influenced by various electronic acts that you played with on festival bills during your previous tour. How did you incorporate that into the new record?

MG: For me it was like research. I found myself being really prejudiced against EDM — four-on-the-floor dance music — and it was great to go back into the history of that while working on this album. I guess the other thing I do a lot when we’re writing is just reading and doing research about what I’m interested in. I was really curious about how that style of music came to be, and that kind of gave me a deeper appreciation for it. The other part of the process is that very early on I involve Nate (Brenner) in what I’m doing. I’ll say, “I wrote this vocal line and this beat, do you want to come in and write a bass line?” And what he’ll usually do is write 18 bass lines and I get to like cut and paste what he does and go back and forth.

It was something I had to sell him on: “I’m really getting into House and Techno.” And he was like, “OK.” It certainly wasn’t what he was listening to, nor what he wanted to be listening to. That’s a lot of what influenced this album — a lot of push and pull against each other and what we were listening to and what elements were ending up in the music.

CB: You’ve talked about attending a six-month anti-racist workshop while you were writing the songs for the new album. Why did you feel that was necessary and how did it impact the songs?

MG: Because black people are being killed by the state at an alarming rate. The moment of making Nikki Nack was when these women of Black Lives Matter and many other talented organizers were saying, “Now is the time that this is an emergency and now is the time that you’re going to hear about this so it changes.” I’ve been aware of racial justice work and I’ve been aware of white privilege and I’ve been aware of how my music troubled me because I’m a white person very influenced by black music of all kinds. That’s always been there for me, and I think this is just a deepening of that work for me.

CB: And that was before Trump’s election. How did you react when he won?

MG: It raised an interesting question about what music even does or what it provides to people at times like this. For me I think a lot of it was, “What am I doing with my time and my day? Should I be making phone calls? Should I be in the streets? What can I do to improve the situation?”