Mattei celebrates the album's release with a free show on Saturday, Oct. 19 at the Southgate House Revival 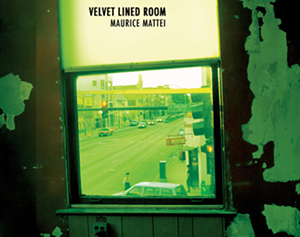 Maurice Mattei doesn't really have anything to prove at this point in his life. The Cincinnati-based artist's extraordinary work as a graphic designer and photographer has spoken volumes for itself over the past three decades, and his output as a singer/songwriter over that same period has expanded on his initial Dylanesque direction to incorporate the droll humor of Loudon Wainwright III and John Prine, the working stiff observations of Bruce Springsteen and the storytelling gifts of Robert Earl Keen.

Mattei isn't necessarily interested in creative reinvention so much as simply finding fresh stories to tell in a familiar fashion. He's like a four-star chef who crafts new and splendid dishes from the time-proven ingredients in his well-stocked pantry.

For Mattei's latest album, Velvet Lined Room, he sat down alone with his acoustic guitar and documented 18 fascinating Folk vignettes, obviously conceived during a particularly productive songwriting period. The ostensible double album begins with the Blues-and-Dylan-tinged title track and the chugging, sauntering strut of “Maid's Day Off,” seemingly the tale of a recently paroled captain of industry. On “Sante Fe,” Mattei channels Keen and other similarly talented Texas troubadours, while “Down to Three” is a loping rundown of the day's specials at an upscale restaurant, delivered to a discerning customer by a literate and and equally discerning waiter, an acoustic companion piece to David Baerwald's furiously electric “The Waiter.”

The rest of Velvet Lined Room follows the lead of the album's introductory tracks. “Scary Eyes” examines a lover's tarnished past, exemplified by words rarely heard in standard love songs, specifically “Atrocities galore” and “I could not resist your scary eyes.” Then there's the menacing cautionary tale of “The Well To Do,” where a down-at-the-heel pal examines a friend's pursuit of the high life by way of an unpayable tab, the equally foreboding “Secret Man” and the unfortunate life-and-love biography of a neer-do-well in “The Circus Never Leaves This Town.” The album closes with the gentle Folk ramblings of “Spaceship From Afar,” a tale of alien abduction, sans probes or take-me-to-your-leader threats of planetary destruction — it's just a quick joyride around the galaxy.

Like everything in Mattei's extensive catalog, there isn't anything on Velvet Lined Room that could be construed as filler — there are simply songs you like and songs you love. That's a damn fine track record in a 30-plus year career. And, more importantly, it's solid evidence that there's always an amazing bumper crop coming from Maurice Mattei's fertile songwriting field.

For the best promo announcements in the biz and more info on Maurice Mattei, visit his Facebook page  listen to his music at Soundcloud and other streaming services.