Plus, Juan Cosby is set to release his 'Inhospitable Planet' Friday and and 500 Miles to Memphis celebrates the 10th anniversary of 'Sunshine in a Shot Glass.' 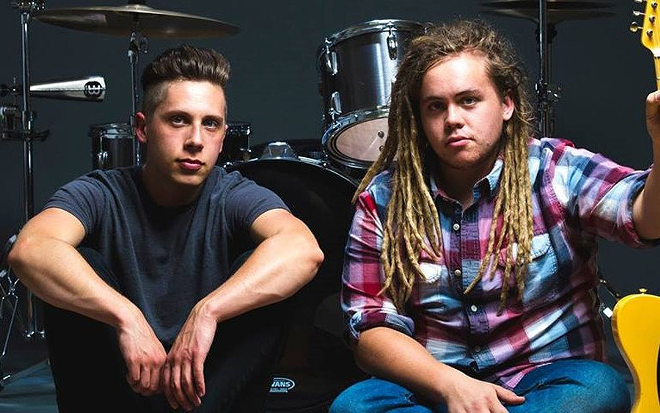 Consisting of brothers Cullen Corcoran (vocals/guitar) and Myles Corcoran (drums), Vibrant Troubadours specialize in raw, gimmick-free Rock & Roll steeped in Blues, Grunge and Pop and delivered with uninhibited passion without sacrificing musical proficiency. There’s an enjoyable dynamic on Cool Grassthat unabashedly showcases the duo’s spectrum of contemporary Alt and Indie Rock influences. The thick distorted guitars, bleeding vocals and heavy rhythms of tracks like “In My Face” and “Don’t Buy Me Things” suggest a deep appreciation and admiration of Nirvana. Fans of Cobain and Co.’s pre-superstar album Bleach, in particular, will appreciate Vibrant Troubadours’ unfussy and direct approach, but the Corcorans also share a similar attention to the craft of songwriting, something that set Nirvana apart from its peers and likewise makes Cool Grass so much more than just a riff-a-thon.

Instead of the Punk Rock love that informed Cobain’s music, Vibrant Troubadours often shade their sound with a Blues-like feel (though Grass’ primal “Let’s Go” is a great, full-throttle Punk screamer), while there are also several highlights on the new album that are simply crafty and melodically sound Rock & Roll songs. “So It Goes” is a charming, buoyant slice of Indie Rock that recalls another powerhouse duo (’90s faves Local H), while “Honey Don’t” is a winsome ballad that sways with an alluring contentment that brings to mind The Commodores’ slow-jam hit “Easy.”

The only knock against Cool Grass is something that also makes it a good, in-full listen — the diversity of the tracks. Not that it would be better if everything sounded more alike — as mentioned, the variation is entertaining — but you sometimes get the feeling while listening that the duo is still searching for its own distinct voice. The album shows that there is clearly a lot of talent between the Corcoran brothers, and their gifts seemed destined to evolve into something a little more focused. The bi-polar nature of Cool Grass is cool, but the core skills revealed are revelatory, suggesting the best is yet to come from Vibrant Troubadours.

• Cincinnati producer/MC Juan Cosby is set to release his Inhospitable Planet, a dazzling exploration of progressive Hip Hop, this Friday. The debut solo album from the Counterfeit Money Machine member includes guest artists like Blueprint (featured on the stellar lead single, “Hard to Beat”), Eyenine, CJ the Cynic and Travis Touchdown of Raised x Wolves, among others. A free album release show goes down this Friday at MOTR Pub, where Cosby will be joined by special guests WeirDose and Audley & Ronin, with Counterfeit Money Machine also performing. Showtime is 10 p.m. Visit juancosby.bandcamp.com for more on the new album (and check back with CityBeat in the next few weeks for a profile of Cosby).

• One of the best albums to come out of Cincinnati in this century is Sunshine in a Shot Glass, the watershed LP by local Roots Rock greats 500 Miles to Memphis. The album turns 10 this year and in honor of the anniversary, the band will perform songs from it (and probably from the group’s other great records) at a show Friday at The Southgate House Revival (111 E. Sixth St., Newport, Ky., southgatehouse.com). Showtime is 9 p.m. and tickets are $7 in advance or $10 at the door. Dead Man String Band and GeeGee’s Punk Rock All Stars open. For more on 500 Miles to Memphis, go to 500mtm.com.

This is the wrong lead image for this video, but it's funny — and the song is brilliant. Hear/purchase the full album here: