This video was filmed in Edinburgh last year. "A year later, in this time of pandemic, I truly miss the adventures of being a touring musician and so this video makes me long for it." 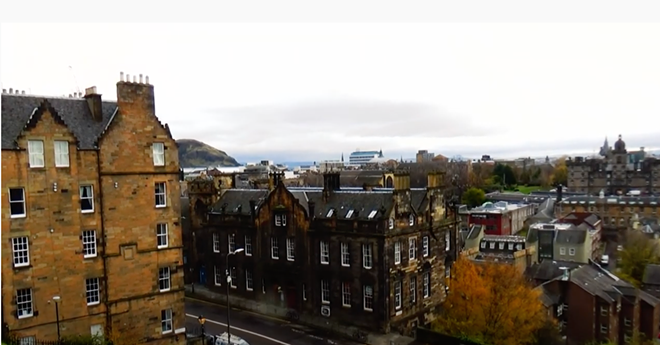 At the time, CityBeat Music Editor Mike Breen wrote: "Six Feet of Earth contains a mix of traditional Folk ballads from Scotland, England, Ireland and the U.S., as well as a couple of originals. Described as a mix of 'murder ballads, love stories, work songs, traditional instrumentals' and more, Oberst sings and plays banjo and a few other instruments on the album, with some friends helping out on the recording on instruments like cello, uilleann pipes and even sitar."

We first debuted Oberst's music video for the lilting, haunting track "North Country" in September 2019, and Oberst just sent us his new video for the instrumental tune "Flowers of Edinburgh."

In an email, Oberst says:

“I filmed this video a year ago today while on tour with my Tiller brothers and our friend Alan in Edinburgh Scotland, one of my favorite places on earth. This is what was caught on tape during a 24-hour meander. Edinburgh’s grand and gritty medieval splendor has captivated me since my first visit as a 19 year old, on what seemed like a once-in-a-lifetime adventure with my mom just a year before I lost her to cancer.

On my 2019 album, Six Feet of Earth, I included a well-known old tune called 'Flowers of Edinburgh' for my mom and our memories of the old city. Patti Walker plays the wonderful hammer dulcimer accompaniment. This video revolves around that tune.

A year later, in this time of pandemic, I truly miss the adventures of being a touring musician and so this video makes me long for it, I guess. We are all now living much different adventures than we were a year ago. Here’s to hope!”

Watch the video for "Flowers of Edinburgh" below: