“I want younger musicians to experience how a professional band works together, how time is managed and how the room’s vibe affects the music." 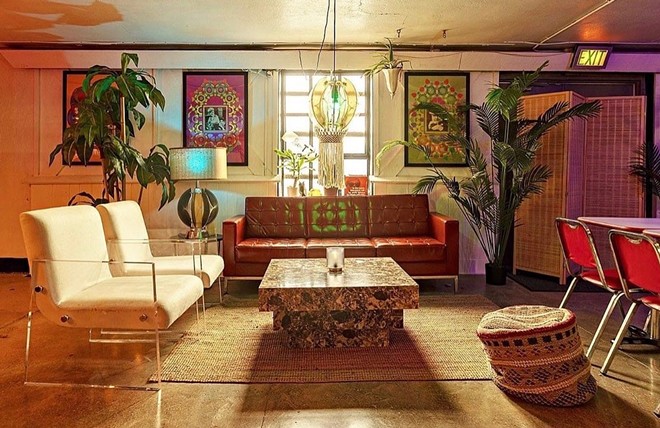 Photo: Courtesy of The Lounge
The Lounge at Liberty Exhibition Hall has comfortable vignettes that recall a past era of basement venues.

A jam session can be serious business for musicians in any genre. It’s typically about honing one’s chops with peers, often battling for solo supremacy with an audience limited to other musicians.

But that’s not the vibe at Northside’s Liberty Exhibition Hall Lounge, where increasing numbers of jazz fans show up on Monday nights to hear the house band and a jam session featuring many of the area’s top artists and astounding young talent. During Liberty Jazz Lab, audiences hear exciting performances in a venue whose retro seating vignettes and lighting recall 1950s and early 1960s jazz lounges that create energy shared by both sides of the stage.

That vibe is exactly what Carol Brammer says she’s after. Brammer is the artistic director of Clifton Players and began producing theater with actors less than three feet away from an audience in a tiny Ludlow Avenue bank annex.

Brammer moved her organization into Liberty Exhibition Hall in 2017 and the following year, she and her former husband Craig Brammer inaugurated Liberty Jazz Lab, an independent series of concerts highlighting out-of-town groups and aspiring local musicians, all young and many on the brink of major careers.

Jazz Lab earned a nod from CityBeat as “Best Hope for New Generations of Jazz” in its 2019 Best Of Cincinnati edition, with the newspaper citing the season’s performances of “boundary-ignoring jazz.”

Jazz Lab’s performances were on the Liberty’s upper level, which included a stage, a bar and restrooms. The building opened in 1909 as Cincinnati’s first vaudeville theater and later housed a movie palace. It served as home for the Cincinnati Deaf Club before going vacant for 73 years. Clifton Players eventually acquired the property.

Brammer’s children’s theater programs and other performances were held in Liberty’s space but jazz remained a priority.

“We have an amazing jazz presence here and we asked ourselves what’s not being done for these artists,” Brammer tells CityBeat. “There was no place with a fusion of age groups in one room. The response to Jazz Lab showed us the audiences were out there.”

Brammer says she was eager to move forward with plans for weekly jam sessions. Those plans evaporated with COVID shutdowns, but her team used the time to transform the Lounge’s lower level into a nostalgic throwback to hip venues of the ‘50s and ‘60s.

“It looked like an Elks Lodge,” Brammer recalls. “We did some painting and sourced furniture and lighting fixtures from all over the country.”

The Lounge crew created comfortable vignettes with varied seating options, tables and subdued lighting that evokes a past era of basement venues. All that’s missing is the blue fog of cigarette smoke — you’ll find that outside in the adjoining alley.

“I was really blown away by it and I love the acoustic,” says house band member Josh Strange. “It feels like you’re in someone’s living room.”

The completed Lounge convinced Justin Dawson to sign on as coordinator for the weekly jam sessions in October 2021 (“I say I’m hosting the sessions,” he says). The 25-year-old bassist maintains a busy gig schedule and a solid network of musicians, including his friend and CCM classmate, vibraphone wizard Josh Strange. 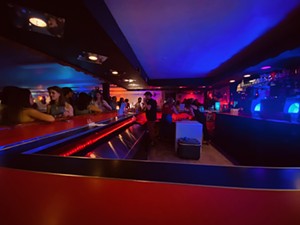 Photo: Courtesy of The Lounge
Jazz fans of all ages are discovering the Lounge in Northside.

Dawson chose Monday nights when most jazz musicians are off. He then formed a house band made up of some of the area’s most respected jazz artists to open the evening. Dawson is on bass, Strange on vibraphone, Tony Franklin on drums and Mike Wade on trumpet. Keyboard and sax vary; Phil DeGreg is frequently at the piano.

Dawson curates the house band’s weekly set list, which lasts about an hour. He says it’s more than a showcase for a specific composer or the band.

“I want younger musicians to experience how a professional band works together, how time is managed and how the room’s vibe affects the music,” Dawson says.

The set list is tailored to the band members’ strengths and experience in specific jazz forms. Dawson also views a set as a potential teaching tool.

“I want to showcase the range of what jazz can be,” he notes.

The jam session follows, and participants have to play by the rules.

Who shows up? Professional musicians, music teachers and students as young as age 12. The students often astound their elders, band members say.

“There’s a 13-year-old drummer who just made my jaw drop,” Strange says. “He’s already got the chops of a seasoned pro and he was so respectful of the other musicians.” He adds that there also has been a 12-year-old cellist from the School for Creative and Performing Arts who blew everyone away with her solos on Charlie Parker’s “Anthropology.”

The attendance is just as impressive, spurred in part by no cover charge and no drink minimum. When asked about the latter, bar manager Emma Roberts laughs.

“We have a great wine and cocktail menu,” Roberts explains. “Once people are here, they want to stay and enjoy a drink or two.”

Roberts has been with the Lounge for five months and already knows many of the Monday-night regulars. She says that on Monday nights, the Lounge has the feeling of a neighborhood bar.

As the sessions’ first anniversary approaches, the Liberty team has ambitious goals for the coming year. Increased attendance is a priority, along with boosting social media. And if the Lounge’s attendance exceeds 100, “we can move upstairs!” Brammer says.

Dawson says he wants to bring in more musicians, especially touring guest artists who may be able to extend their stay to include a Monday night gig.

“Everyone I play with hears about the sessions. They’re excited about it, and more locals are showing up,” Dawson says

“You have to come and experience the room! It’s great!” Strange adds. “The ratio of people listening to music is high compared to other places, and for us musicians, that’s great.”

Building on CityBeat’s 2019 citation, Dawson adds, “Is jazz dead? ‘Swinging’ is a verb, and you can’t be dead if you’re swinging.”

Butler Tech School of the Arts Students Write and Record 'Hold On,' an Anthem on Perseverance