Car Seat Headrest's Will Toledo Talks About the Lo-Fi Aesthetic, Remaking His Old Songs and Borrowing From Others

The acclaimed band comes to Bogart's on Saturday, June 29 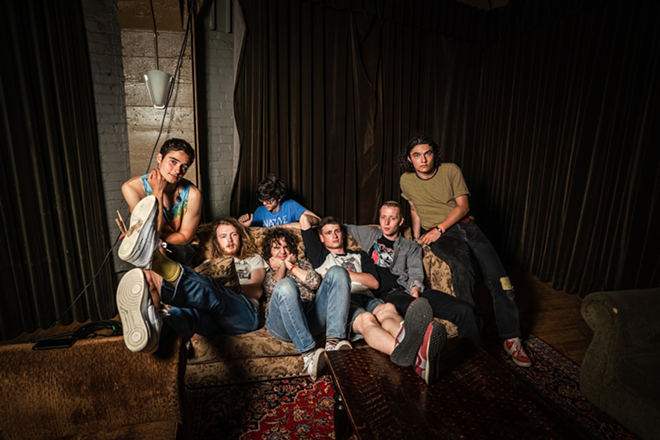 It’s not clear whether Will Toledo read The Great Gatsby as an English major at the College of William & Mary in Virginia. But there are at least a couple of lines from the classic novel with which the mastermind behind acclaimed Indie Rock group Car Seat Headrest would certainly agree. Namely, “You can’t repeat the past? Why of course you can.”

With the release last year of the ambitious Twin Fantasy, a riveting re-do of his 2011 release under the same title, Toledo confirms his belief that you can not only repeat what’s come before — you can also definitively improve upon it.

Using inspired packaging, Matador Records released the updated version with the original lo-fi, self-released Bandcamp version for contrast. Listening to both iterations is a compelling experience. It shows just how far Toledo has grown from the days of solitarily recording the original on a laptop in his car for privacy (inspiring the project’s name) to collaborating with a full band and producer Adam Stilson on the still emotionally intense upgrade. (For more of the full-band Car Seat Headrest experience, check out the just-released live album, Commit Yourself Completely.)

Now 26 years old, while still in college, Toledo prolifically self-recorded and mixed 11 full-length records, uploading them to Bandcamp and amassing a big following. Eventually signed by Matador, Car Seat Headrest’s Teens of Style, a collection of his early material, and Teens of Denial quickly transformed Toledo into a heralded Indie Rock contender. His bristly, guitar-driven sound sizzles with scope and a strong sense of awareness — of self and of his Classic Rock forbearers.

Twin Fantasy loosely follows the emotional arc of a teenage relationship and its aftermath, capturing all of its inherent angst, subtext and passion. For context, the original’s subtitle is Mirror to Mirror while the new one is Face to Face. With its intensely personal point of view, the release may feel autobiographical, but most of Toledo’s music shares a similarly intimate quality. He also adds lyrics and poetic monologues to the new incarnation.

Toledo’s raw but melodic crunch resonates with overdubbed layers of kinetic guitar, ranging from short nuggets like the Beach Boys-inspired “My Boy” to cathartic, 12-minute epics like the frantic and fragmented “Beach Life-in-Death,” on which he boldly sings about coming out to his friends while pretending to be drunk. The album is a personal tour-de-force and you can hear why Toledo wanted to go back and revisit it.

“When I first wrote Twin Fantasy, I felt it was the best thing I’d done up to that point,” Toledo says by phone from Seattle. “But I was still just doing everything myself with no resources, so it turned out at the time to be a fairly lo-fi record.  I just knew the way I heard it in my mind was a little more expansive than what it turned out to be.  It just never seemed like the book was closed on it. When we signed with Matador, the idea of returning to this record was one of the first things I pitched to them.”

Pink Floyd was a major influence on the album, which might surprise some, though it shouldn’t, considering the iconic band was one of the first to write thematically cohesive records with strong narratives.

“Pink Floyd was one of my earliest influences,” Toledo says. “I probably started listening to them at 13.  And I think they just kind of nailed the (art of the) album, maybe more than any other artist, just sort of their holistic structure and their concept albums. You could put it in a time capsule and as long as people are listening to music, they can dig it up again and it will feel good and will appeal just the way it does now.

“Whenever I make a record, one of my basic go-tos is Pink Floyd. I actually referenced their ‘Jugband Blues’ on the first version (of Twin Fantasy) and there’s a little hidden snippet that references The Wall on (the new version).”

Like many a young artist, Toledo regularly borrows from his influences — sometimes in a rather exact manner —and he’s particularly good at illuminating the ways they are reflected in his own material. On Twin Fantasy (Mirror to Mirror)’s “Cute Thing,” for example, Toledo incorporated melodies from They Might Be Giants’ song “Ana Ng.” Famously, on Teens of Denial’s “Just What I Needed/Not Just What I Needed,” Toledo quoted snippets of The Cars’ hit in homage; Cars frontman Ric Ocasek objected and Matador had to recall already-shipped copies of the album (at great cost to the label).

On Twin Fantasy’s “Nervous Young Inhumans,” Toledo sings, “Art gets what it wants and art gets what it deserves.” He says the track’s subtitle is “A Song About Art Theft.”

“The art theft title came from wanting the song to go more into the idea of influence vs. plagiarism, the way that artists feed off each other,” Toledo says. “That’s been interesting to me to see in other people’s work and in my own. You start off wanting to do something original and it ends up being something of a reflection to what you’re checking out. I don’t know if the final song ends up talking too much about that, but it’s there in the song and album.”

Even though the remade Twin Fantasy gleams with a grander, streamlined sound, traces of his lo-fi aesthetic remain. After all, Toledo grew up on bands like REM, who often intentionally obscured lyrics and melodies beneath dense, roiled sonic textures.

“I was going for a sound that I liked,” Toledo says of the less polished aesthetic. “It wasn’t a 100 percent ‘This is the way it is because I have no other sound options.’ I think growing up listening to older music from the ’60s leads you naturally into liking lo-fi stuff, such as Indie music from the ’90s, like Guided by Voices, where you can’t necessarily hear every detail but there’s a compelling energy to it. I tend toward that.

“Really, I just work with the resources I have and go toward an interesting sound. Lo-fi is one of those, but not the only option.”