Live music will run March 1-2 at the Woodward and neighboring MOTR Pub in honor of the theater’s restored façade, with performances by local artists like Lauren Eylise, Ernie Johnson From Detroit, The Mortals, Automagik and more 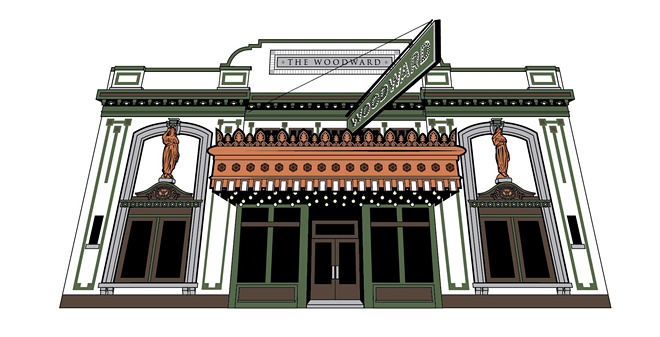 In late 2017 it was announced that The Woodward Theater, a popular music and events venue in Over-the-Rhine, would receive a $150,000 grant to bring back its exterior marquee. On March 2, the new marquee and lighted sign will be officially unveiled and lit up as part of The Big Turn On Festival at the Woodward and neighboring MOTR Pub. Beginning right after the opening of the 27th annual Bockfest celebration (the Bockfest parade on March 1 runs in front of the Woodward), Big Turn On events will include live music throughout the weekend of March 1-2.

According to a press release, The National Trust for Historic Preservation’s Partners In Preservation grant was "used to bring back the original intent of The Woodward’s 1913 façade exterior including design, fabrication and install of the copper marquee, return of the historic electric sign, replacement of 52 plaster 'rosettes' and cleaning of her glazed brick." On March 2 at 6 p.m., the more than 300 light bulbs on the new sign will be switched on for the first time and the copper marquee designed by local artist Kate Schmidt will officially be introduced.

“Cincinnatians understand and embrace our city’s history," Woodward Theater co-owner Dan McCabe says in the release. "From our music, our beer, our baseball… to our unique architectural heritage. Cincinnati continues to demonstrate to other cities how to celebrate and leverage their history for future growth.”

The Woodward won the PIP grant as part of a nationwide contest. The marquee restoration project received more than 53,000 votes.

“The Woodward Theater was the perfect project for the 'Vote Your Main Street' competition," says Paul Muller of the Cincinnati Preservation Association. "It received incredible voting support from the community because they (are) so connected and community minded. The restored marquee reestablishes an important part of Main Street’s historic variance. Bright lights were new and exciting in 1913… they will be just as exciting when they return in March.”

In honor of the theater’s restored façade, The Big Turn On Festival will feature performances at the Woodward and MOTR Pub by local artists Lauren Eylise, Ernie Johnson From Detroit, Jon Schuyler, FLOCKS, Doctor Bionic, Audley, Automagik and The Mortals, who recently reunited for the first time in nearly a quarter century for a performance at the Woodward. Also performing throughout the weekend of March 1-2 will be Baltimore band Super City and Nashville Soul Funk crew The Gripsweats, who record for powerhouse Loveland, Ohio vintage Soul label Colemine Records.

The Woodward Big Turn On shows — Eylise and her band The Part Time Lovers with Schuyler and Audley on March 1 and Ernie Johnson From Detroit with Doctor Bionic and FLOCKS on March 2 — are ticketed events; click here for details. The MOTR Pub shows, as always, are free.