Fans of Ohio music and the great outdoors can get their kicks at a new music festival debuting July 21 on the riverfront of the Great Miami River. Adventures Fest features Indie Americana, Rock and Pop musical acts from throughout Ohio and offers opportunities for camping, kayaking, hiking and more activities on the river and in the woodsy natural setting. 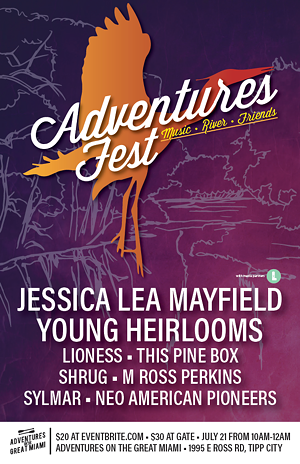 Located on the 34 riverside acres of the Adventures on the Great Miami grounds in Tipp City, Ohio (about 15 miles north of Dayton), the festival is sponsored by Cincinnati-based, local-music-friendly online radio platform Inahiler.

The rest of the Adventures Fest lineup is heavy on Dayton-area artists, including some great acts with which Cincinnati fans may be familiar. Indie Rock group This Pine Box works with Cincy-based Old Flame Records and was a favorite of the late, great local radio station WNKU, while M Ross Perkins has recorded for Northern Kentucky’s SofaBurn Records. Orchestral Indie Folk troupe Lioness is fronted by Nathan Peters, formerly of Indie Pop band Captain of Industry, a Cincinnati club/festival favorite. Formed in the mid-’90s, AltRock vets Shrug had their music in rotation on iconic radio station 97X/WOXY, placing among the finalists of its popular 97xposure competition a few times in the early ’00s.

10 p.m. The Neverly Brothers of Shrug & The Boxcar Suite (Dayton)

Tickets are $20 in advance or $30 at the gate. Click here for complete info and tickets.