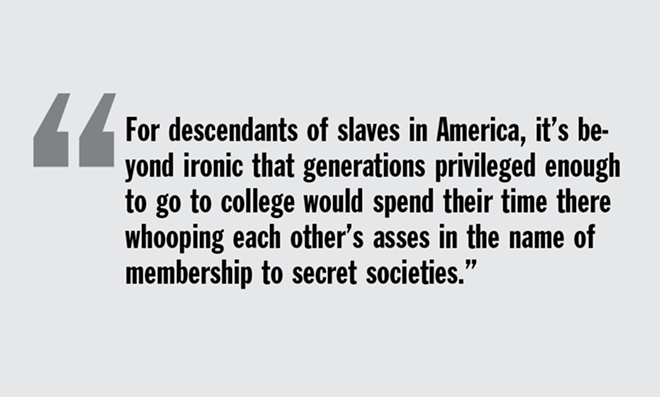 I first learned of their mass kidnapping from an early Instagram post by Yagazieemezi, a woman from Lagos, Nigeria, who’d just returned home from living in New Mexico. She included the hashtag — now a nearly global rallying cry — #bringbackourgirls.

NBC’s Brian Williams said most succinctly (but not first) that if this kidnapping had happened here there would’ve undoubtedly been immediate alarm and a widespread call to action.

Our FBI has said it will help Nigeria find its girls but only if Nigeria firsts asks for our help.

There is such a thing as political diplomacy, but how much does that matter when children are involved, feared dead or sold away?

It is dismaying to say so, but in a country where Islamist extremists rule the north and Christians live in the southern majority and the two splinter into religious turf wars, and the kidnapping, rape and murder of its children seem de rigueur, maybe President Goodluck Jonathan, who only recently even commented on the kidnappings, does not know how to ask for help or is too afraid of further pissing off the Boko Haram to do so.

Worse and sadder still, modern Africa cannot have it both ways — independent pockets of peacefulness surrounded by nations with so little regard for its boys and girls that the raiding and burning of schools is scheduled with the military accuracy of raids on other countries.

So much advancement, so much paternalistic backward motion, Nigeria.

Boko Haram usually steals and kills boys, either to train them as soldiers or to keep them from growing up to fight against the extremists.

The slow-footed response of President Jonathan and the rest of us reminds me of just how little the world regards black girls and women.

Watch any national evening news broadcast, Dateline NBC, 20/20 or CBS’ 48 Hours, and do a little unscientific study of your own. It will not take long to see that the mainstream media does not care or care to cover the murder, kidnapping, rape or disappearance — cold case or otherwise — of black girls and women in this country with the investigative doggedness it uses to bring closure to the lives and the families of white girls and women.

And this has been true for as long as I have been paying attention.

There are moments, bowing to the same pressures it took President Jonathan to finally make a public statement, when networks will run the occasional story of the missing black woman who has fallen prey to foul play at the hands of an abusive husband or boyfriend or the story of the pigtailed black girl gone missing just feet from her home never to be heard from or seen again, but then those stories fade away.

No follow-up, no more stories of black women and girls abused or murdered until the next time some black family makes enough noise to get the grease; no normalizing of loss, one of the few things in life that disregards race.

And, like the parents of the nearly graduating class of Nigerian girls who pooled their own money to buy gas to fuel motorbikes to ride into the brush looking for signs of their girls, black American parents are left alone in their own neighborhoods to tack up homemade missing posters made during the night at Kinko’s.

There are seldom network news cameras capturing footage of candlelight vigils, ribbon campaigns and prayer walks when one of our girls or women goes missing here.

At least our answers are painfully simple.

We can blame a chain of command of network news executives who’ll give whatever reason and maybe even pass the buck of blame to producers, assigning editors and reporters.

Whom do we look to for blame in Nigeria?

The parents, who dared send their girls off to school instead of into the anonymity of arranged marriages?

President Goodluck Jonathan, the man with so far the year’s most ironic name, for allowing this culture to exist and for not shoring up his military in the northern region where the extremists have a stronghold?

The United Nations, for never intervening in Africa soon enough and for never quite sanctioning the ill-fated nations of Africa to teach them lessons in how to treat their people? (Remember AIDS, genocide, the lost boys of the Sudan, female genital mutilation, Nigerian oil pirates?)

Or should we blame the Boko Haram members, said to be ready to purchase the 223 unaccounted for 16- to 18-year-old girls for the bridal price of $12 each?

That’s a mere $2,676 for the lot — very, very little for human lives and less still in America, land of consumerism, price tags and label whoring where that amount would not pay for one shoe lace in one of Kanye’s new Adidas sneakers or one row of stitching in but one of his bride’s reported three wedding gowns. Neither would it be enough for a down payment on a fraction of one of Jay-Z’s gold ropes, nor one row of silky Hawaiian weave in his wife’s head.

However, there is one way in which Nigeria, in all its madness and devaluing of the lives of black girls, has it all over America and our own brand of madness and the ways we devalue black women and girls.

And that’s this: At least Nigeria’s Boko Haram put a price on the lives of its black girls.

Twelve bucks and a hashtag.