The removals could lead to a legal challenge on First Amendment grounds, the paper's publisher says 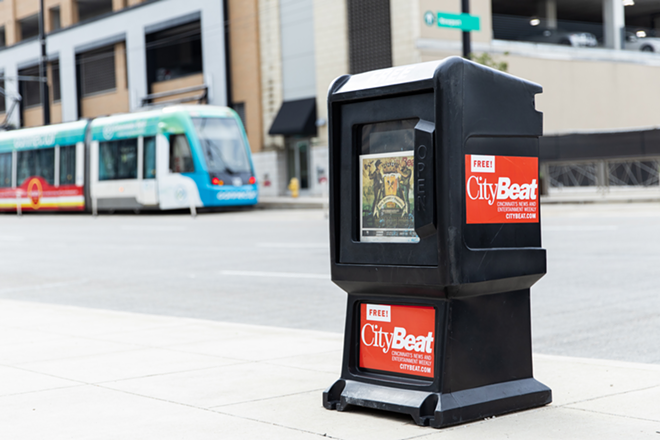 Boxes for the distribution of free news and advertising content that have occupied public rights-of-way in Over-the-Rhine and downtown Cincinnati for decades are on the way out, the Cincinnati Center City Development Corporation (3CDC) says.

But CityBeat, a news and culture weekly that has maintained such boxes for almost a quarter century, says it will fight the change in court if necessary.

This week, the private nonprofit development corporation removed at least nine of the publication's boxes near Cincinnati City Hall and other locations around downtown. 3CDC says it will remove the rest of those boxes over time.

That could spark a challenge in court on First Amendment grounds, according to representatives from CityBeat and its parent company, Euclid Media.

"Our downtown/OTR distribution is a crucial part of our business for both our readers and advertisers," CityBeat publisher Tony Frank said. "We feel this is a direct violation of our First Amendment rights and are willing and prepared to fight and defend these rights.CityBeat is a free-of-charge news and cultural institution that has been a vital part of this community since 1994. Our readers trust us to share the best Greater Cincinnati has to offer and we strive on a weekly basis to create meaningful conversations and champion the local businesses that make our city a great place to live, work and play. The timing of these removals is especially unfortunate, as it directly affects the distribution of our Pride issue — one of the most important issues of the year to us."

In an emailed statement, 3CDC spokesperson Joe Rudemiller called the boxes "visually unappealing and often covered in graffiti.” Rudemiller also said newspaper boxes and their contents are bad for the environment, "which we find to be in conflict with a city as progressive as Cincinnati.”

"Earlier this year, 3CDC merged with Downtown Cincinnati, Inc.," Rudemiller’s statement reads. "The combined organization is responsible for certain aspects of safety, cleanliness, and beautification in the Central Business District. Our goal since taking on these responsibilities has been to maintain the public space on behalf of the building owners, investors and stakeholders of downtown. This includes maintaining and improving lighting, fixing deteriorating sidewalks, improving the quality of surface parking lots, introducing flower pots and plants to make the (Central Business District) more visually appealing, and removing structures placed in the public right-of-way by private individuals, who do not have a legal right to place these structures in the right of way."

Some federal courts have disagreed on that last point when it comes to news outlets, however, routinely upholding the rights of publications to place distribution boxes in public places. CityBeat's sister paper, the Cleveland Scene, won a settlement in a May 2017 First Amendment lawsuit against a similar private nonprofit development entity, Downtown Cleveland Alliance, which removed 26 of the publication's boxes from that city's downtown district. Terms of the settlement were not disclosed, but the paper won the right to continue placing its boxes downtown.

In 2014, Oregon State University settled a First Amendment lawsuit brought by a conservative student paper published there between 2002 and 2009 after employees at the public university removed their newspaper boxes, but not the boxes of other publications. The school was found at fault in the U.S. Circuit Court of Appeals and eventually paid $1,000 plus $100,000 in legal fees to the former student who had published the paper. Oregon State has subsequently changed its policies to allow any approved groups to distribute papers on its public campus.

In 2010, a federal jury awarded New York-based weekly publication the West Chester Guardian $8 million in a First Amendment lawsuit after the city removed the publication's newspaper boxes there. The city and publication later agreed to a $393,000 payment.

Fights about newspaper boxes aren't new to Cincinnati. In 1993, the U.S. Supreme Court struck down a City of Cincinnati ordinance that called for removing 62 boxes on public property containing commercial handbills.

Frank says 3CDC first notified the publication about the potential removal of plastic boxes for aesthetic reasons April 5. Frank says CityBeat has worked with 3CDC on a compromise — removing some of the less-used boxes and refreshing a number of others with new labels. That compromise seemed to be satisfactory until the week of June 17, according to Frank.

"As you may be aware 3CDC recently merged with DCI (Downtown Cincinnati, Inc.) and as part of the merger we have taken over management of the ambassadors and downtown streetscape," 3CDC's Vice President of Operations David Vissman wrote in an email April 5. "One of the items that has come up in our initial board meetings is management of the vending boxes throughout downtown and putting more structure to what is being put out and where it is located."

While the city has not responded to CityBeat directly, Department of Transportation and Engineering City Engineer Don Gindling wrote to 3CDC representatives June 19 asking the entity to stop taking the boxes.

"If your staff is removing the boxes please stop," Gindling wrote. "Please let us know if you have removed any of these, if so you may want to reach out to CityBeat and return them. If you have issues with any existing locations, let DOTE know and we can start the process for getting them relocated or removed."

"First, I do not think the city has the power constitutionally to remove the boxes, or at least the city must move very gingerly in light of the powerful protections of the First Amendment," Council member David Mann said in a June 21 statement. "We were told as much by the U.S Supreme Court in the 1993 decision of City of Cincinnati v. Discovery Network, Inc., 507 U.S. 410.

"Second, I cannot understand how 3CDC has the authority to remove CityBeat’s distribution boxes for esthetic purposes," Mann continued. "Wonderful as 3CDC and its many contributions to our city have been, it is a private organization without direct accountability to our citizens.  I have asked the city solicitor to explain how it can be that 3CDC is removing constitutionally protection publications from our public sidewalks.  If, by some technicality, we have granted this authority to 3CDC, it must be revoked."

"[email protected] is a valued journalistic pillar of our community," Sittenfeld tweeted June 19. "More importantly, they're entitled to exercise their First Amendment rights. I 100% support their continued distribution in the way they've done for yrs. Further, these are not decisions City Hall should outsource."

After 3CDC's initial messages in early April, Frank and Vissman discussed the situation back and forth via email.

3CDC at one point offered space for some CityBeat boxes in their garages, but that solution would not allow for the same level of distribution the paper has currently, Frank says.

On April 29, Vissman responded to a list of CityBeat distribution points with a message that seemed to indicate that boxes that are regularly filled with publications, such as CityBeat's, would not be removed.

"Do you know which boxes are abandoned by name of paper?" Vissman asked in that email. "We don’t want to remove any that are still being distributed."

On May 20, a representative from 3CDC emailed Frank to notify him that a box on Second Street would be moved temporarily to make way for the filming of TV program American Ninja Warrior.

"We will place it back once filming and set breakdown is complete," that email concludes.

Frank says that box was never replaced, however. That email was the last communication from 3CDC until CityBeat delivery drivers noticed the missing boxes downtown this week, the publisher says.

After emails from Frank, Vissman acknowledged that 3CDC removed the boxes.

This story has been updated with response from Cincinnati City Council members, as well as an email from the city to 3CDC.