While the flood of voters could bode well for Democrats, a closer look at turnout patterns shows the picture is more complicated 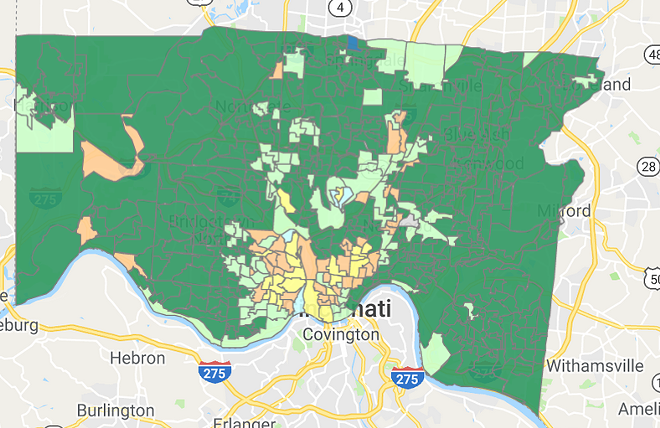 Voter turnout in Hamilton County. Dark green is the highest turnout level — more than 50 percent — orange and yellow are 20-40 percent and blue is less than 20 percent.

Two years after a tumultuous election that ushered in the tenure of President Donald Trump, Hamilton County voters tonight got their first chance to weigh in on his performance by casting ballots for congressional candidates. They did so — and logged their votes for Ohio's statewide offices and on a number of pivotal local concerns — in historic numbers for a midterm election, with voter turnout reaching levels not seen in a non-presidential election in over two decades.

Pureval must also contend with Chabot, a 22-year congressional veteran, in the entirety of deep-red Warren County, where Republicans outnumber Democrats four to one. Pureval is looking to grab as many Democratic votes as possible in a Hamilton County that has recently gone bluer. Those votes are usually most concentrated in the city of Cincinnati proper — where turnout was most inconsistent.

A huge number of precincts in suburban areas on the East and West sides of the county saw turnout percentages in the high 50s, 60s and even low 70s. One precinct on the West Side near I-275 called Colerain AA saw 72.5 percent turnout. At another on the East Side, Evendale A, three out of four voters streamed into the polls throughout the day, voted early or cast an absentee ballot. Historically, those precincts have backed more conservative candidates. That could be bad news for Pureval.

Turnout was mixed in the more liberal-leaning precincts. One, 10-A in Mount Auburn, got off to a sleepy start in the morning, with just a few people filing into the gym of polling location God's Bible College to cast ballots about 9:30 a.m. But a steady stream came later in the day, propelling the urban precinct to a 50 percent voter turnout rate.

Those core precincts, however, were a patchwork, making it difficult to divine how turnout would affect candidates' chances. Nearby precincts — in some cases just blocks away — saw turnout percentages that dipped down into the 20s.

Lines snaked through the lobby of the downtown branch of the Public Library of Cincinnati and Hamilton County, the polling location for the city's 6th precinct, but by 5 p.m., voters there had slowed to a trickle. Turnout there ended up at 46 percent, but neighboring precincts in Over-the-Rhine, downtown and the West End saw turnout percentages much lower.

The opposite dynamic held elsewhere in the city, with voters coming late in the day. The parking lot of the Truth and Destiny Covenant Ministries, the polling location for precinct 23-B in Mount Airy, filled up as the sun cast waning gold light on the nearby Mount Airy water towers. Early in the day, that precinct's turnout rate had hovered at around 10 percent. It finished out at 25. Another precinct covering Lower Price Hill saw its turnout top out at 16 percent.

Things were more consistent in Democratic-leaning neighborhoods like Clifton and Northside. At a polling location in the former, a steady stream of voters filed through, though a bug in the county's ballot scanners that caused the scanners to reject ballots where voters didn't cast a vote in every category tripped some up momentarily. That precinct ended up with a 70 percent voter turnout rate, and neighboring precincts in the liberal neighborhoods had turnout rates in the high 50s or higher.

Results are just now coming in for the races — stay with CityBeat for updates.