Currently, Hamilton County Judge Brad Greenberg presides over a housing docket once a week, but the new court would have broader jurisdiction and more focus to take on the complex problems associated with housing. 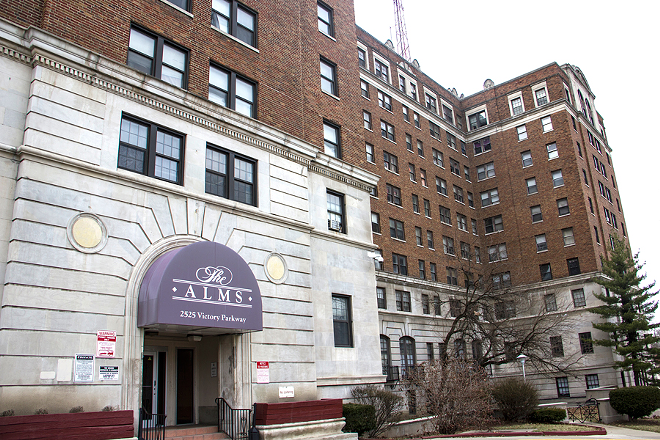 “This was really a nice place,” he says of the former hotel built in 1929. From the building’s half-lit community room, he points to the spot outside a set of side doors where a pool once stood, complete with beach lamps and umbrellas on the patio.

“It was for working people, but it was really beautiful, wasn’t falling down,” he says. “It’s changed hands so many times, I don’t ever get to meet the people who own it.”

The deterioration Hawkins and other residents of The Alms have witnessed took place over decades but reached an intense nadir under the ownership of a New Jersey company called PF Holdings LLC, which until recently owned and managed several buildings across the city. Now, as a court-appointed management company works to make those buildings safe and habitable again, Cincinnati and Hamilton County officials are pushing for a new court that could intervene earlier in cases where negligent landlords let vital affordable housing crumble.

Tenants in PF Holdings buildings like The Alms were plagued by roaches and bedbugs. Each of the buildings faced structural deterioration, roof leaks, lack of heat and other mechanical issues, plus accusations of intimidation by building management against tenants who complained.

Last February, a judge ordered five buildings owned by PF Holdings, including The Alms, placed in receivership. That means the money from federal housing programs that was flowing into the landlord’s bank account will now go to court-appointed management company Milhaus Properties.

Officials hope the proposed new court, dovetailed with other efforts, could prevent tenants from suffering extreme conditions in the future. The intensity of that work illustrates the complexity of maintaining decent affordable housing in Cincinnati and the expense and time needed to make things right when a building is neglected for so long.

A dedicated, full-time housing court for Hamilton County has been more than a decade in the making. Currently, Hamilton County Judge Brad Greenberg presides over a housing docket once a week. But the new court, part of the court of common pleas, would have broader jurisdiction and more focus to take on the complex problems associated with housing. The cost would be around $400,00 a year, though fees against landlords could make that cost budget-neutral.

The idea has some big-name backers from across the political spectrum, including Hamilton County Commissioner Chris Monzel, newly elected Hamilton County Clerk of Courts Aftab Pureval  and a number of Cincinnati City Council members.

“It’s not that people don’t want to do the right thing,” Councilman Kevin Flynn, a supporter of the court, said at a Council committee meeting on the idea last month. “It’s not that neighborhoods don’t care. It’s not that judges don’t want to care. But when you have a judge who is dealing with a felonious assault or a murder or a rape in the morning, and then they’re faced with numerous housing violations in the afternoon, it just doesn’t get that same level of attention.”

The proposed new court could catch problems with landlords like PF Holdings earlier by automatically taking on code violation and other housing complaints and by being able to consider the full scope of a landlord’s properties and activities. The court would also have the power to compel landlords to make repairs, give status updates and hold them in contempt if they fail to show up or take action.

Similar courts in places like Cleveland and Columbus have seen some success. Cleveland’s court has issued more than $157 million in sanctions against negligent landlords, according to a recent presentation before Council by Cincinnati City Solicitor Paula Boggs Muething. That court also takes the city’s eviction cases, something Hamilton County’s court would do only in a limited, secondary way.

But will the court help prevent other low-income tenants from enduring conditions like those found at The Alms or Burton Apartments, where a roof collapsed last year? Yes, but it will also take other efforts, tenant advocates who support the idea say.

“This is the first time we’ve really seen some momentum” toward the dedicated housing court, Greater Cincinnati Legal Aid Society’s Stephanie Moes says. “It’s not the magic pill or silver bullet, but we do think having one place with one judge who is knowledgeable about housing issues is really crucial.”

Over the past few years, much of the work of pushing for improvements in the buildings has fallen to the residents themselves, organized into tenant associations with the help of groups like Legal Aid and the Greater Cincinnati Homeless Coalition.

At a recent meeting in the Alms’ community room, a handful of residents met with representatives from Milhaus Properties, the company that took over running The Alms by order of Hamilton County Judge Beth Myers last February.

Milhaus took over The Alms and four other buildings housing more than 1,000 residents in Walnut Hills, Avondale and Westwood once owned by PF Holdings, which racked up more than 1,800 housing code violations in those buildings.

Milhaus has made some changes — beefing up private security at The Alms and interspersing it with Cincinnati Police Department patrols during peak hours, replacing security cameras, making emergency fixes and lining up long-term plans for more extensive repairs.

“We are starting interior repairs here at The Alms,” says Therese Cochran, a regional director with Milhaus. “We’ll probably start with vacant units first and then move on to occupied ones.”

That work should start in February, after two other former PF Holdings buildings on the West Side that are in danger of losing their HUD certification are stabilized.

Meanwhile, there are still problems. Some tenants continue to struggle with roaches. There are water leaks. Heat in some of the units is intermittent, weak or non-existent.

“When Therese says it’s an emergency, it really is, and they’re going to treat it that way,” Legal Aid’s Virginia Tallent told tenants at the meeting about problems they were reporting. “And if they don’t, I want to know about it.”

Even as Milhaus works to shore up The Alms, uncertainty around the building’s future is a stark illustration of what’s at stake when a landlord neglects property.

A bank holding the mortgage on the building has filed foreclosure proceedings, and The Alms could end up sold through a sheriff’s auction.

“This is actually a really critical time in the case,” Tallent said at the tenants’ meeting. “It’s critical from Legal Aid’s perspective that the properties end up with better ownership and management than they had in the past, and that the properties continue to be affordable housing and don’t get closed down or get turned into market-rate housing.”

Another proposal currently in its early phases could work with the housing court to make it easier to keep things from escalating to the point that buildings like The Alms have reached.

Legal Aid and community groups like Santa Maria Community Services and LISC have begun discussing the creation of preventative rental inspection programs, which would look to head off problems before they get severe. Those inspection programs might be piloted in neighborhoods like Avondale and Price Hill.

“I think a rental inspection program that puts code enforcement out there earlier would go hand in hand with the court in getting to these properties before they’re really bad,” says Moes, who stresses the idea is in its early phases.

The full-time housing court itself is moving ahead in the meantime. City and county officials have already met with the Ohio Supreme Court, which would need to approve the creation of the dedicated court.

The hope is that the high court signs off on the idea by February, clearing the way for the Ohio General Assembly to pass legislation officially creating the new court in the spring. If all that happens, according to City Solicitor Muething, the new court could be up and running by September or October. ©