A Surplus of Empathy

Rather than worrying so much about what we already know and what’s yet to be learned about Donald J. Trump, most of us need concern ourselves with what we’ve learned about ourselves. 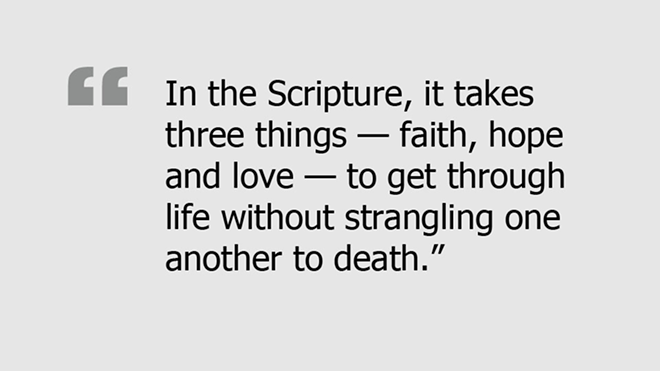 Decision 2016 is not, as most American things are, solely about race, yet it is still somewhat about race. It is also about self-hatred, gender-hatred, that old long-player “The Cult of Personality” and what my sister, Devin, calls “the death of icons.”

Beginning with America’s Old(est) Testament, race: To be black in America is to inhabit a sort of cosmic/comic waiting room wherein our names are never called regardless of how early we arrive and no matter how legibly we fill out the forms; doesn’t matter about our personal references, work histories, educations or other details of personal pedigree.

We wait for all sorts of decisions that have questions folded in them like dryer sheets we missed in the laundry: Now that I’m pulled over, will I drive away or will my name be forever mentioned in my family’s lawsuit against some agency of death?

I waited hours in line for what they said was my right to vote. Will this new white “leader” save me/us from what past white leaders have wrought and what one black man couldn’t untangle, or will I/we return to the comfort of paranoia and conspiracy theories? Or, if you’re poor and black like me, the question is: Can one white man who sits high and never looks low mess with something as seemingly miniscule but so personally monumental as my Medicaid?

Perhaps time will tell it.

In the meantime, the truth is that America elected an orange-faced wig hat who uses workers he hates to dip everything in gold over the entitled liar so full of her own hubris she’s immune to her far-reaching actions run dreadfully amok.

Rather than worrying so much about what we already know and what’s yet to be learned about Donald J. Trump, most of us need concern ourselves with what we’ve learned about ourselves and the folks we literally count as Facebook friends now that they’ve revealed themselves as the narrow, bigoted, ravenous sore losers they are.

I have been hit with emails from helpless-feeling, hapless, confused white friends containing multitudes of links to anti-Trump websites with screeds, petitions, rants and schemes to get him out of office before he’s even taken the oath.

These white folks are crestfallen, assuming because they could taste the sweet victor of the historic win of the first-ever woman in the White House, it would be so.

Well, they forgot about all the uncloaked, uncloseted, angry white supremacists who have ironically been playing James Brown’s “The Big Payback” in their pickup trucks on the way to Trump rallies and, most importantly, to the polls.

And my black friends have been chopping, waiting to hear what I think about “all this.”

I don’t think any more deeply than any of you.

I have reached a level of empathetic bliss, of near apathy that transcends even the word count limitations of this editorial space. I will concede to being flummoxed by the apparent overall lack of our ability to level with the truth.

That, and the mind-boggling ways folks are acting out as sore losers is almost funny. And not in a haha way, but in a sardonic way.

To the chagrin of either camp, this, then, will go down as an era of character revelation.

Who are we all?

As in high school, we are all largely still joiners of cliques. Only now as grown-ups we dress them up and call them movements.

And we give them thought-provoking, pithy names with equally catchy slogans.

That last one could go either way, frankly.

For the “I’m With Her” stalwarts, the loss of Hillary Rodham Clinton signals the penultimate death of an idol. Further, her presidential frontrunner status proves, once and for all, how much (white) women really do hate other (white) women and that postmodern feminism really is a self-fulfilling lie, merely another social clique, a long high school lunch table with no real room at the inn/end.

On the last days preceding the election, New York magazine ran on its Instagram page images of Trump supporters skewing heavily toward women. The captions beneath these images were more telling than the images themselves, adorned as they were in the uniforms of the disenfranchised: obese, disheveled and garishly overly accessorized.

One middle-aged (white) woman, in response to the assumed question of the revelation Trump bragged about groping women’s pussies, said she did not mind being groped and that heterosexual women liked to be groped and if a man groped her she would grope him right back.

A younger (white) woman wearing a U.S. Army hoodie said she was a veteran — a group Trump clearly shat all over during his campaign. Still, she said she had no love for Hillary Clinton and could not relate at all to her. She said she was voting for Trump because she didn’t believe Clinton would make her life any better.

Then again, who really could, can or will make our lives better in this current climate?

I don’t know about you but I feel largely inconsolable, like everything from here on out (for the next four years, anyway) is solely the responsibility of my people and me.

And when I say “my people” I do not narrow-mindedly or naively mean black people.

My extended family of man.

The people who have wandered a little afield the past eight years, content by our own do-goodiness that we twice could come together and elect and re-elect an elegant, handsome, intelligent black man and his likewise smart, gorgeous and articulate wife.

Now say goodbye and farewell to all that and hunker down in whatever humanity, love, resourcefulness and, yes, hope you have leftover.

Put that ish in a microwave-safe dish, maybe add a little water or milk and bring it back to life.

Because, unlike those other slogans and movements, hope is more than a temporary placebo to move butts to the polls.

And in the Scripture, it takes three things — faith, hope and love — to get through life without strangling one another to death.

So whether you believe in these three things as they are put forth in The Word, believe this: Trouble don’t last always.

Yes, there will be some hard times, but this here’s America.