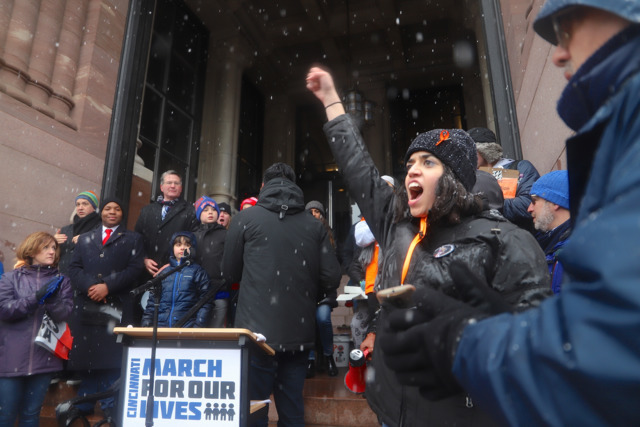 Following recent deadly mass shootings in El Paso and Dayton, multiple gun control advocacy groups and elected officials will rally outside U.S. Sen. Rob Portman's downtown office this evening (Aug. 8) to advocate for legislation restricting access to weapons like the ones used in those tragedies.

The rally has been organized by several groups including Cincinnati's Young Activists Coalition, Moms Demand Action and Students to End Gun Violence. In addition to attendees from Dayton, State Sen. Cecil Thomas and Hamilton County Clerk of Courts Aftab Pureval will also speak at the event.

“We have to stop gun violence in this country,” Pureval said in a statement about the rally. “There is a bill in the Senate that over 90 percent of Americans support to help stop mass shootings. We ask Senator Portman, Senator (Mitch) McConnell, and all our Senators to go back to Washington and help pass commonsense gun safety legislation.”

Cincinnati City Council yesterday passed a resolution asking the Senate to end its recess to pass that legislation, which would require universal federal background checks for the purchase of firearms. The U.S. House of Representatives has already passed HR 8, its version of the law.

There have been 255 mass shootings so far in 2019, according to a CBS News analysis.

Nine people died in the early morning hours of Aug. 4, when 24-year-old Connor Betts opened fire with a semi-automatic rifle and a 100-round magazine in Dayton's popular Oregon District. Dozens more were wounded in the attack. Dayton Police quickly shot and killed Betts. Authorities, including the FBI, are still investigating Betts' motives for the attack. Megan Betts, the shooter's sister, was among the dead.

Less than 24 hours prior, 22 people were shot and killed in El Paso when alleged gunman 21-year-old Patrick Crusius began firing a semi-automatic rifle in a crowded Wal-Mart. Police took Crusius into custody unharmed. He faces potential federal hate crimes charges connected to a manifesto authorities believe he posted railing against an "invasion" of immigrants threatening white people in America.

Tonight's rally will begin at 312 Walnut Street and, after speeches, will end with a march and candlelight vigil at Smale Riverfront Park.