Cincinnati's daily newspaper is now 0-for-4 in covering UC road games against ranked opponents this year.

ESPN called it the American Athletic Conference’s “Game of the Year,” and Sunday’s matchup between the No. 25 SMU Mustangs and the No. 11 UC Bearcats in Dallas drew glitterati like former president George W. Bush and Dallas Cowboys quarterback Tony Romo. It was the kind of hard-fought contest that has defined the schools’ battle for supremacy of the AAC in recent years, and ESPN beamed it out to a national audience.

Not in attendance? The Cincinnati Enquirer.

Cincinnati’s daily newspaper of record — which touts its sports coverage as No. 1 in the Cincinnati and Kentucky area — paid an SMU student journalist to cover the game instead of sending a staff reporter to Dallas. Perhaps stringer Patrick Engel was busy with his regular reporting gigs, with Scout.com’s SMU fan site and the SMU Daily Campus, because it took nearly five hours after the game ended to find his story published on cincinnati.com. The photo of head coach Mick Cronin accompanying the story wasn't even from the same game — it was a repurposed shot from a home game taken earlier this season. 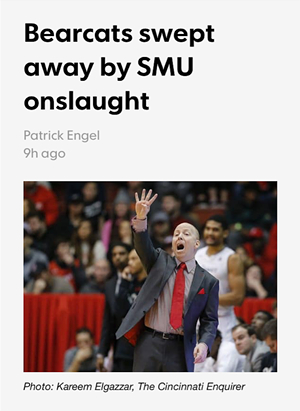 Mick Cronin not coaching against SMU

Bailing on the SMU trip leaves The Enquirer 0-for-4 in covering UC road games against ranked opponents this season, a marked departure from past years when beat reporters for UC and Xavier basketball rarely missed a road trip.

In this case, according to Enquirer sports editor Jason Hoffman, regular UC beat reporter Tom Groeschen missed the trip because of a personal commitment.

"I’m sure you understand that things come up and employees need to have time off to attend to personal commitments. There is absolutely no change in staffing for any of our beats."

Early this basketball season, The Enquirer also skipped UC’s trip to a tournament in Connecticut where the Bearcats played No. 21 Rhode Island with the possibility of going up against No. 1 Duke the next day. Then it sat on the sidelines in December for a roadie to Ames, Iowa, where UC knocked off No. 19 Iowa State. When No. 15 Butler came up on the schedule a week later, The Enquirer couldn’t muster the staff to drive 100 miles to Indianapolis to cover that game, either.

CityBeat in December reported the details of this relatively new phenomenon — using stringers for road games instead of footing the travel bill for full-time reporters — which followed buyouts and layoffs of longtime reporters covering UC and Xavier. The Enquirer at the time had also skipped one of Xavier’s two road trips and the team’s appearance at Big East Media Day in New York City.

“We will not be missing any UC or Xavier games the rest of the season,” Hoffman said at the time.

Back then, Hoffman chalked up the lack of road game coverage in part to the opportunities presented by the USA Today Network, a collection of Gannett papers that can aid coverage of road teams for their hometown papers.

The difference in attention to detail was evident, however, when The Enquirer published the very same story that ran in the Indy Star recapping the UC-Butler game for a pro-Butler audience. That story included video analysis of Butler’s win, the phone number and Twitter handle of the Indy Star’s Butler reporter and details about Butler’s next game. All published at cincinnati.com, where corporate owners Gannett would like readers to fork over $120 per year for digital access.

Heading into the SMU game, UC had reeled off 15 straight wins and rose to No. 11 in the AP poll. The Mustangs had won 17 of their last 18 games, with UC handing SMU its lone loss in two and a half months. Making the clash even more intriguing: The NCAA Tournament selection committee on Saturday announced the current top 16 seeds in the NCAA Tournament. UC didn’t make the cut, but the Bearcats likely would have jumped into the list of 4-seeds with a win against SMU.

Instead, the loss dropped UC (11-1) a half game behind SMU (12-1) in the conference standings. Both schools are likely to earn berths in the NCAA Tournament, and they could end up meeting for a third time this year when the AAC tournament kicks off in Hartford, Conn., next month. The USA Today Network™ does not appear to have an affiliate there.