Just don't call it an act of God The owners of a biblical-themed attraction in Northern Kentucky patterned after Noah's Ark are suing their insurers in federal district court over rain damage to a road leading to the attraction.

The 510-foot-long Ark Encounter itself, built in Williamstown in 2016, wasn't damaged in the heavy rains of 2017 and 2018 that are at the center of the lawsuit. But those rain storms did wash out a nearby access road.

The landslide was repaired and the ark is open for business, but now Ark Encounter's parent company Crosswater Canyon LLC wants compensated by its five insurance companies. Crosswater says it holds insurance policies that should cover those damages, but that the insurers haven't paid for the bulk of the repairs. 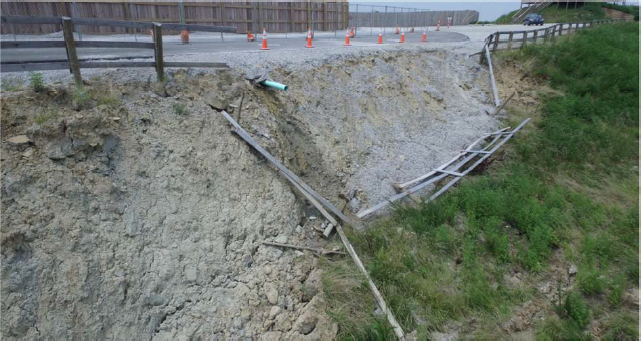 The company says that representatives from its insurers were given access to the property after the landslides started in 2017 and that those representatives gave the go-ahead for repair work to begin. Crosswater then constructed what is called a drilled-shaft retaining wall where the road had washed out.

Then, in March 2018, the insurers denied liability, citing a clause in the insurance policies excluding damage caused by design deficiencies or faulty workmanship. According to Crosswater's lawsuit, the insurers have admitted their policies may cover part of the $1 million repair costs, but have still not paid for the bulk of the work.

"Defendants' obstinate refusals to provide coverage for plaintiffs' cover loss is being improperly influenced by defendants' financial interest in minimizing the amount to be paid to on the claim," the lawsuit reads. "By refusing to pay for all but a very small portion of plaintiffs' covered claim, the defendants have failed to meet their policy obligations and failed to handle plaintiffs' claim properly and in good faith, causing plaintiffs to incur significant additional loss and expense."

Attorneys with Cincinnati's Keating, Muething and Klekamp are representing Crosswater Canyon in the suit.

"The lawsuit speaks for itself," a spokesperson at a Texas-based public relations firm retained by the company said in a statement. "We don’t have anything to add at this time, other than to say that we are highly confident of the merits of our case as we seek a fair resolution to the matter."

Ark Encounter is a based on a Bible story describing an ark that Noah built to ride out a massive flood ordered by God. The group that operates the Northern Kentucky attraction also owns the nearby Creation Museum, another biblical theme park.