As the opioid epidemic continues, Cincinnati could end the funding it provides this addiction treatment center

The Center for Addiction Treatment in the West End has received city funding for years. But that could change in the upcoming budget. 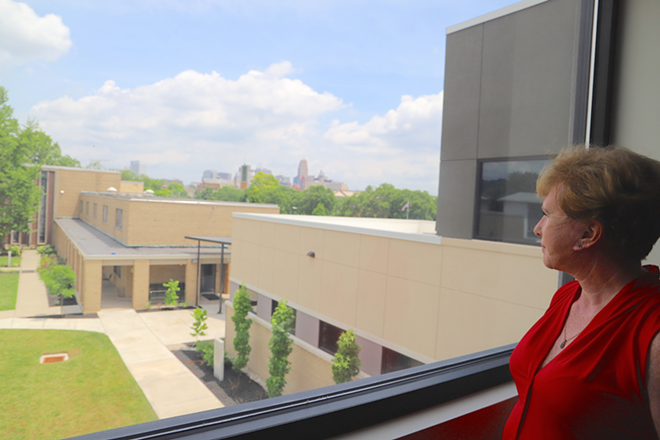 Nick Swartsell
Center for Addiction Treatment CEO Sandra Kuehn looks out over the nonprofit's original facility, where it would like to build more residential treatment space for women. But she has more immediate concerns — CAT could lose funding it receives from the city this year.

A few years ago, Chris Hay came down with a severe case of pneumonia and had to undergo surgery to remove fluid from his lungs.

Afterward, he was given Percocet to treat his pain while he was recovering from the procedure. Hay says it was the beginning of a slide into chemical dependency.

“I was taking them as prescribed,” he says. “But I’d already been drinking excessively. I can’t really explain it. When they went away, I felt sick. It got into buying pills on the street, and that led to heroin.”

Hay, a tall, solidly built 27-year-old from Riverside who works as a carpenter, spiraled, living what he calls “a crazy lifestyle” and becoming estranged from his family.

At an especially low point in July 2017, Hay came to a squat former convent tucked off of Ezzard Charles Drive in the West End, where he spent 30 days in a residential treatment program and months more in outpatient aftercare.

For years, that facility, the Center for Addiction Treatment, has received city funding for its work. But, if current budget proposals by acting Cincinnati City Manager Patrick Duhaney and Mayor John Cranley are any indication, it won’t get that money in the coming budget.

Volunteers created CAT in 1970 over concern about people dying in Hamilton County jail cells while detoxing from alcohol abuse. The center has been on the front lines of battling addiction — including the region’s swelling opioid crisis — ever since.

Why is the city potentially cutting funding to the only freestanding nonprofit addiction treatment center within a 180-mile radius as that crisis rages on? The answer is complicated, involving a city budget stretched to its limits and some politics thrown in for good measure.

Complicated or not, the cuts come at a tough time, CAT’s Executive Director Sandra Kuehn says.

The region’s addiction crisis is only getting worse —529 people in Hamilton County died of overdose deaths in 2017, compared to 403 the year prior. Many of those deaths involved fentanyl, an additive that dealers once covertly mixed into opiates like heroin. Now, many people with addictions are seeking it out.

Kuehn says the center gets roughly 350 calls a day about its services. It has 42 beds available for its residential treatment services and another 18 for more immediate detox needs, as well as capacity for outpatient care. All told, the facility is serving about 550 people a month, she says.

Generally, those looking for addiction treatment at CAT go through a similar process. First, a clinician evaluates the potential patient and, if appropriate, diagnoses them with an addiction disorder. Then that person enters a two-to-seven-day stint in the detox program, which is overseen by a doctor and nurse practitioner, followed by a potential stay in the center’s residential facility, usually for roughly a month. Patients can also receive several months of aftercare, which includes a support group overseen by a clinician.

Those additional services are aimed at helping keep patients — and their support networks — on the road to addiction recovery.

“The intent is to have a fully integrated model of care,” Kuehn says of the mental health and primary care additions. “Now we can treat couples, we can do family counseling; it’s a lot broader.”

The center has other expansions in mind, including building more residential treatment beds for women. Currently, it has more beds for men.

CAT isn’t entirely dependent on the city. Forty percent of its funding these days comes from Medicaid. The rest comes from the Hamilton County Mental Health Board and Recovery Services Board, which allocates from various pots of money within the county. Some patients pay for their treatment, and other counties also pay for some services on a contract basis.

But without the city money, the center may not have enough funding to pay some of the staff it hired to meet the ever-growing need for addiction treatment here.

Kuehn, who has led the CAT house for 27 years, is lobbying Cincinnati City Council to find some money for the clinic. But the outcome is unclear right now.

“Any scenario, I have to come up with a solution,” Kuehn says as she sits in the center’s calm, freshly minted addition. “I don’t want to cut services. That’s the last thing I want to do. Worst case scenario, I would have to let clinical staff go.”

The city has had to make tough choices as it faces a $32 million deficit, and a number of programs will see cuts. But CAT’s current funding dilemma is a little more complicated. Two years ago, the center received $180,000 through the city’s United Way human services funding system.

Under that system, created in 2010, Cincinnati City Council sets priorities and provides a pot of money, and the United Way oversees a committee of volunteers who act as consultants to recommend applicants for funding.

It’s a competitive process — one in which addiction treatment isn’t explicitly mentioned. The three priorities council has given United Way are employment, violence prevention and prevention of homelessness. Based on those priorities, United Way has been advising the city on where to invest its limited human services funding.

“They’ve tried to take a lot of the politics out of it, so they developed the human services advisory committee,” says United Way Vice President of Strategic Resources and Public Policy Margaret Hulbert. “That group was selected from a broad base of the community, and they made determinations and recommended them to council, who approved them.”

United Way itself doesn’t handle city money, save $80,000 that covers a portion of the administrative costs of running the program.

The advisory committee ranks applicants for human services funding based solely on council’s priorities and stops when the money does, Hulbert says. The model runs on a two-year cycle. As long as a program can prove it has been effective, it is generally recommended for a second year of funding.

Council also passed a motion 7-0 by Councilwoman Amy Murray asking the city to add the opioid crisis to its list of priorities. That never fully happened, however, and United Way received the same set of priorities this year.

“Administration ignored a unanimous council motion to emphasize dealing with the heroin epidemic,” former Cincinnati City Councilman Kevin Flynn says. “It’s unbelievable that it was done. We need to change that. We passed a motion in July of 2017 that said it should be part of human services funding and it was completely left out once again.”

CAT isn’t taking the cuts sitting down. Kuehn and supporters of the center have turned out in force at three recent City of Cincinnati budget hearings, asking council to add their funding back into the budget.

“Their witness is persuasive, and they do good work,” Councilman David Mann, who attended those meetings, says. “I imagine that will have some sway.”

Cincinnati City Council has final say over the city’s budget and could shuffle money around to fund CAT, as it did last year.

United Way’s Hulbert says the situation with CAT is an illustration of deeper dynamics with the city’s budget. Hulbert acknowledges that addiction is a vital issue and says at the end of the day, the solution is the city committing more fully to funding human services.

In the 1980s, she points out, Cincinnati City Council passed legislation requiring the city to spend 1.5 percent of its operating budget on human services. In the past decade, that funding has backslid significantly. In acting City Manager Duhaney’s budget, for instance, the city would spend only .69 percent on human services. Mayor John Cranley’s budget would spend .93 percent.

“It was a clear recognition that in good times and bad times, that balance of services is important,” Hulbert says about council’s decision long ago to spend 1.5 percent. “I don’t blame the acting city manager — these are hard choices. But I do hope the mayor and city council go back toward that 1.5 percent.”

Meanwhile, people like Hay, the carpenter who went through CAT’s program, say they hope it gets more funding.

These days, Hay has a full-time job making custom cabinets. He lives in a recovery group home, but hopes to soon move in with his girlfriend of three years, who stood beside him through his addiction.

“My life had become unmanageable,” he says of the days before he entered CAT. “I knew I needed help. I listened, and I learned in there, man — I kind of sat down and shut my mouth and they taught me.” ©

UPDATE: City Councilman P.G. Sittenfeld on June 19 shared a motion that would provide CAT with $88,000 in fiscal year 2018 by shifting money from the city's funding for state lobbyists, and other council members have introduced their own motions that include funding for CAT. Council votes on a final budget next week before the June 30 end of the fiscal year.