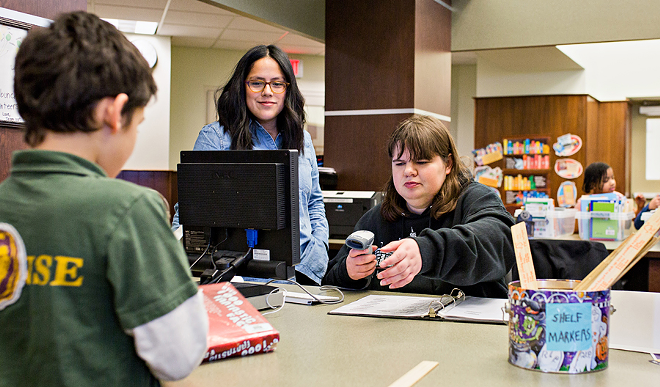 Connecting with others can be challenging for anyone. It’s often especially difficult for those with cognitive disabilities, who face barriers most of us never consider. Some may have trouble with conversation, or aren’t able to drive. These issues can lead to isolation and feelings of loneliness, especially for adults.

But helping people overcome those obstacles is the goal of Tim Vogt, director of vision and scale for Starfire. Starfire is a local nonprofit that works to help those with developmental and cognitive disabilities thrive.

The lives of most disabled people are not considered in this way, Vogt says. Many times, they get up and go to an institutional program multiple days a week. Associates there are oftentimes people who have been paid to play at being their friends, or others with disabilities.

The person may be interested in Classic Rock or metaphysics or horse racing or any other thing by which people find kinship with others. But, says Vogt, the institutional structure lumps them with other people by disability instead. The message is clear: You’re broken and don’t belong with the rest of us.

“They are treated as if they have no sort of decision making ability or any ability to participate the way the rest of us are,” he says.

Starfire strives, as much as possible, to be unlike other social service agencies. Their model is designed to get away from segregating people with disabilities, Vogt says. Instead, they work to build connections and relationships and help their clients discover their own passions and talents so they can lead engaged and fulfilling lives.

Jill Cleary and Molly Grace are Community Builders with Starfire. Cleary is a paid employee and Grace is a client, but the Starfire team avoids these sorts of terms.

Grace, in her early thirties, became involved with Starfire in 2010. She moved to Cincinnati nine years ago and lives with her mother in Turpin Hills. She has a cognitive disability, meaning she may need a little more time to catch on to something new, but she is able to work and maintain relationships well.

Grace says she didn’t have much of a social life or luck in finding purposeful work before Starfire.

“It is hard sometimes to get along with people,” Grace says. “Starfire helped me connect. It helped me get the job where I’m at on Fridays.”

Cleary meets with Grace once a week. They brainstorm ways to get Grace involved in community life and work on ways to deepen the connections they’ve built.

They almost never spend time at Starfire’s office in Madisonville. The goal is to get Grace out in the world to build relationships that last a lifetime.

Over the past several years, Grace has begun a clerical job that she works every week. She takes part in fantasy football games with her co-workers and is on the planning committee of Bark For Life, a fundraiser for the local branch of the American Cancer Society.

“I think we just try and find affiliations where we would find good people to connect with,” Cleary says. “The overall work of reaching out and trying to find people that can relate to you and make a difference — I think no matter who you are, if you just ground yourself in that, then you can do good work together.

“I think it’s hard sometimes,” Cleary says of Grace. “We might expect Molly to understand what other people are thinking, but she’s only lived as herself so she doesn’t have that perspective. I think Molly has found a lot of good people who have seen Molly for who she is and Molly didn’t have to change anything about what she naturally was.”

Vogt’s insights about the social service industry came early in his career, when he was a counselor at a camp for people with physical disabilities in California.
One man at the camp had cerebral palsy and had difficulty moving his body. He motioned to Vogt to help him light his cigarette and, later, asked Vogt to help him pour a shot of whiskey into his coke.

“To me, it made perfect sense,” Vogt says. “The guy’s on vacation, he’s 27-years-old. People with cerebral palsy have complete control over their intellectual faculties and their abilities to make decisions and he had brought it himself. So, I’m just being his hands.”

But the head counselor didn’t see it that way and threatened to fire Vogt.

“It struck me at that moment that here was a great injustice,” Vogt says. “He could still vote. He had all the rights that everyone else had but he didn’t have the right to have a drink on his vacation. What happened was this weird social assumption — that he was a camper and what he really needed was control and support.”

The moment planted seeds in Vogt’s mind, but it would take a while for them to bloom.

Starfire worked the standard social service model until 2010, when the organization’s leadership realized what they were doing was helping to prop up a broken system. Vogt was executive director at the time and oversaw the transition toward the collaborative and engaged model it uses today.

Ironically, the capriciousness of U.S. Government funding and policies has pushed Starfire and other agencies toward a more collaborative approach. The 2009 U.S. Supreme Court decision Olmstead v. L.C. requires states to get rid of the unnecessary segregation of persons with disabilities. This revision to the Americans with Disabilities Act essentially pushes for less institutions and more community building.

In a way, that was a vindication for Starfire, which lost some donors and even saw one client’s family call for Vogt to be fired during the 2010 transition to a collaborative social service.

But there’s a flipside to the approach: There are thousands of locals who qualify for Starfire’s services but only about 100 clients can be served by the organization on an annual basis.

According to Starfire Executive Director Candice Peelman, about 30 percent of Starfire’s funding comes from Medicaid. Medicaid waivers, which offer a community alternative to institutionalization, allow recipients to participate in the Starfire program. That funding is threatened in the current political landscape.

“The last I heard from Hamilton County, there were about 3,000 people waiting to get a Medicaid waiver,” Peelman says. “And that’s not a very fast moving list. Our question at Starfire would be, ‘How do we find natural connections and natural support when we know we don’t know the future of Medicaid?’”

Other agencies have also responded to the shifting landscape.

Wendy Partridge says she founded Chicago-based nonprofit Heroes of the Game so that she could provide some normalcy for her Autistic adult son and others in her region with cognitive disabilities.

She says she regularly seeks advice from the Starfire team. Heroes works with about 20 people with a variety of disabilities and helps them find their place in society.

“We’re just trying to help them have a normal life,” Partridge says. “I met Tim a few years ago and really liked what he was doing and I’ve learned a great deal from him.”

The future of social services in America is not getting any cheaper, Peelman says.

“For us, we’ve said we are going to play in the space of community and natural resources and already existing experiences that people can go to that don’t cost a lot of money,” she says. “There are places and there are people that already exist for all of us. How do we start helping people think of it that way?”