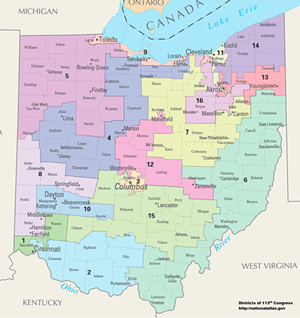 Good morning all. Here’s some quick news for you today.

President Donald Trump visited Blue Ash yesterday to talk up the GOP tax plan. We fact checked him on a number of his statements here.

Most of Trump’s visit was fairly standard and smooth. But while he was in town, he did cause one big hubbub. Trump called congressional Democrats “un-American,” and even suggested they were “treasonous” for their muted response to his State of the Union address. That made national headlines. But why?

Federal law defines treason as levying war against the United States or giving aid and comfort to its enemies. The highest penalty for treason in the United States is death, and the lowest is five years in prison and a lifetime ban from holding elected office. It’s a serious charge with very serious punishments — one that few reasonable people would suggest fits failing to suitably applaud a speech.

By his statement, Trump revealed one of three possible things: 1. He doesn’t know what treason means or what the penalty for it is. 2. He does know these things, but is comfortable joking about imprisoning or even executing his political opponents on wildly exaggerated claims. 3. He actually believes people who don’t applaud for him to his satisfaction are traitors who should be locked up — or worse.

Supporters will write Trump’s statements off as a joke — and it probably was. But any of the three readings above are very disconcerting if you’re, you know, a fan of democracy, and many feel it was a wildly inappropriate joke for a president to make. Members of Trump’s own party have distanced themselves from the statement, including some local elected officials.

• First lady Melania Trump split off from the president to visit Children’s Hospital yesterday, where she toured the facilities and spoke to young patients affected by Ohio’s opioid crisis. Melania spent time with children in the hospital’s neonatal abstinence syndrome clinic, which treats kids who have a range of issues related to their parents’ opioid use, and handed out Valentine’s cards to each patient there. She also invited a family who has a child at Children’s to visit the White House this summer. Jane Portman, wife of U.S. Sen. Rob Portman, and White House staffer KellyAnne Conway joined Melania at Children’s.

• Well, if you were gearing up for a long, hard-fought battle of the boy band burger bars here in Cincy, I have some bad news. Lachey’s Bar, owned by Nick and Drew Lachey of 98 Degrees fame, is closing Sunday, according to a social media post by the bar. As we reported here last night, their tater tots were really good. So what killed Lachey’s? It’s on the streetcar route in the middle of bustling Over-the-Rhine and is owned by beloved hometown heroes. The reasons for the restaurant’s closure remain unclear. But this you can be sure of: whenever one pop-star shaped door closes, another window opens. Cincinnati was recently blessed with a Wahlburger’s, which is owned by none other than Mark “Marky Mark” Wahlberg of the famed Funky Bunch. (Get it? Wahlberg? Wahlburger?) Such is the circle of life.

• Mason City Schools is in the news again for another racially charged incident. A student at the school allegedly posted a video in which he uses racial slurs against black people. The district says it takes such incidents seriously and is investigating. It isn’t releasing much information about the video, which reportedly appeared on Snapchat. It’s not the first time racially charged tensions have reared their head in the district recently. Last month, consternation blew up over statements a white teacher made to a black student in which the teacher told the student his classmates were going to lynch him if he didn’t get back on task.

• Rabbi Robert Barr has left the Democratic Party primary race for the chance to oppose U.S. Rep. Steve Chabot for his 1st congressional district seat. Barr, who raised some big money and made national headlines when he entered the race late last year, cited the entrance of Hamilton County Clerk of Courts Aftab Pureval as his reason for leaving the primary.

"My decision to step out is to help ensure Steve Chabot is defeated," Barr said in a statement this morning. "Aftab needs the time, energy and resources to focus on unseating Mr. Chabot, rather than planning for a primary.”

Democrat Michele Young, who opposed Chabot last election, is still technically in the primary, though she hasn’t officially declared yet.

• Ohio lawmakers from both parties, as well as reform advocates, appear to have settled on an agreement that will put anti-gerrymandering language on a May ballot. The Ohio Senate last night voted unanimously to approve a plan that would change the way the state’s congressional electoral map is drawn, and the Ohio House seems likely to pass it today. That’s not a moment too soon: the deadline to get on the ballot is Feb. 7. Voters would have to approve the plan, which would require half of the minority party in both chambers of the Ohio State House to approve any redistricting map. In addition, the new rules would limit the number of times Ohio counties can be divided up to create non-competitive districts. The vast majority — 65 — couldn’t be divided up at all, while most of the rest could only be divided up once. If the state’s legislature can’t agree on a map, the process would go to a seven-member panel that includes the governor, auditor, secretary of state and four lawmakers. Approval of that map must include two minority party votes.

• Finally, the stock market has taken a beating yesterday and today, with the Dow Jones Industrial Average falling more than 4 percent, its steepest decline since 2011, and other markets in the U.S. and globally fairing similarly. Economic analysts say that’s not reason to panic — yet — but that such declines can be hard to stop once they pick up momentum. Some markets in Europe and elsewhere have limited trading hours today to try and slow the sell-offs.