Earlier this week, Mason High School announced that they will no longer be naming valedictorians or salutatorians beginning with the class of 2020. The decision followed a year-long study which focused on students, teachers and families and was an initiative to improve student's mental well-being.

But not everyone is thrilled by the idea.

“We are moving to a recognition system eliminating valedictorian and salutatorian honors, and shifting to recognizing students who have achieved outstanding academic success through a multitude of pathways," Mason High School Principal Bobby Dodd said in a statement. "The recognition system will reward our students for genuine academic success based on their academic accomplishments. This will help reduce the overall competitive culture at MHS to allow students to focus on exploring learning opportunities that are of interest to them." 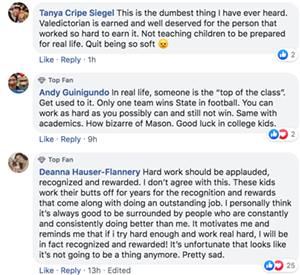 "I’m sorry, what now? We’re reducing competitive nature," Bastool blogger Bobby Reagan (aka Reags) wrote. "Thank God I don’t live in the Mason school district because I can’t have my kid being just soft like this. Everything in life is all about competitive nature."

A recent article by WLWT covering Mason's decision sparked  controversy on their Facebook page, with many commenters opposing the decision.

This is just the first step in their process to refocus Mason students' priorities and improve their mental health, Dodd said.

"Next year, Mason High School and Mason Middle School will start (a half hour) later," he said. "MHS staff are also evaluating reducing the homework load and 'summer work,' and have revised the weighted credit system beginning with the Class of 2020."