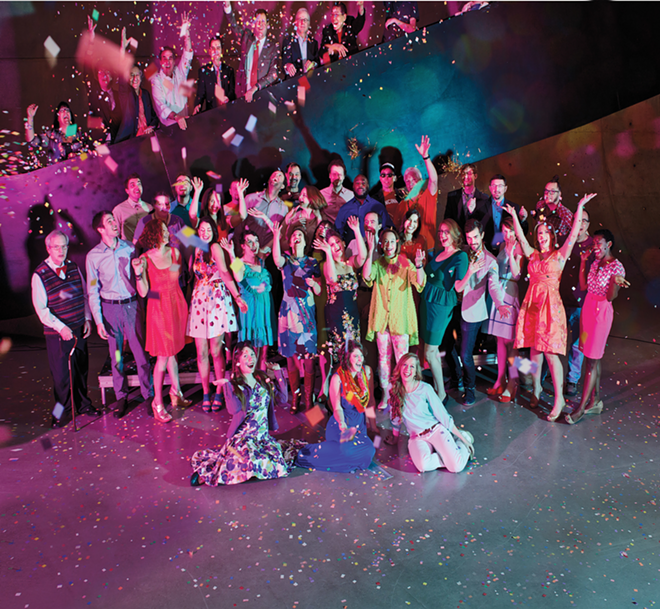 CAC staff and board of trustees

Peggy Crawford didn’t know the group she helped found in 1939 — Cincinnati’s Modern Art Society — would become so long-lived or vital. It is now the Contemporary Arts Center, which on Friday is celebrating its 75th anniversary.

“I feel great about it,” says Crawford today from Santa Fe, N.M., where she lives in retirement at age 96. “I am proud of it.”

At first, the Modern Art Society was a way to display in Cincinnati, where tastes were somewhat conservative, more art that reflected the changes brought by the 20th century. The group raised enough money, about $5,000, to stage six shows in a basement gallery space at Cincinnati Art Museum.

Sounds primitive, but actually the Society was amazingly progressive. And it was easy to make a big impact quickly — Picasso: 40 Years of His Art arrived in Cincinnati from New York MoMA in 1940. Because of the Society’s early activism, the CAC is one of the nation’s oldest institutions exhibiting contemporary art, coming just three years after the establishment of Boston’s Institute of Contemporary Art (at first called Boston Museum of Modern Art). University of Chicago’s Renaissance Society was founded in 1915, New York’s Museum of Modern Art in 1929.

The history is being honored during this 75th anniversary year, which starts with parties on Friday (see details below).

“We just want to celebrate these many decades of interesting, cutting-edge, thoughtful and eye-opening exhibitions and programs,” said Raphaela Platow, the CAC’s director and chief curator since 2007, during a recent interview in her office. The celebration comes at a good time financially, too. Platow says the CAC finished last year with a $125,000 surplus.

The Modern Art Society operated for 23 years at the art museum (and changed its name to the CAC in 1954) and then moved in the 1960s before settling in 1970 into the new Mercantile Center facing Government Square downtown. It moved to its current location, the Zaha Hadid-designed Lois & Richard Rosenthal Center for Contemporary Art, in 2003.

Throughout it all, it has had cutting-edge shows. “That’s what a space like the CAC can do well — have artists making interesting work, on the cusp of what their careers will be,” says Matt Distel, curator at CAC from 2002 to 2006 and now exhibitions director at The Carnegie in Covington.

At least twice in its history, CAC made news far beyond the art world: when it showed Robert Mapplethorpe’s photographs and when it opened its new building at 44 E. Sixth St.

In 1990, graphic sexual content in a retrospective of the late Mapplethorpe’s work, The Perfect Moment, prompted conservative elements, including some elected officials, to unsuccessfully try to shut it down and prosecute the CAC.

Those elements also pressured some local sources to stop funding the CAC, but national organizations stepped in to help.

“I always thought the CAC would survive; it always had a strong group of people behind it from the beginning and certainly through the Mapplethorpe crisis,” says Dennis Barrie, CAC director at the time. “I think for awhile the CAC’s finances were on the ropes, but people rallied to us locally and nationally.”

The CAC plans to explore themes raised by Mapplethorpe’s work during the upcoming 25th anniversary of presenting that exhibit. But it isn’t doing what some might think would be obvious — exhibit his work again, even though shows are out there.

Platow explains why: “We thought it might cause the wrong dialogue and discourse at this moment in time, and we just didn’t want to go there. Everything would just be focused on ‘back then,’ and we wanted to move forward. We might very well do a Mapplethorpe show down the road. We just didn’t want to do it for the anniversary.”

The opening of Hadid’s Rosenthal Center drew international acclaim. The New York Times’ Herbert Muchamp called it “the most important American building to be completed since the end of the cold war.”

The CAC is celebrating the anniversary of that, too, in events like the current exhibition Buildering, organized by new curator Steven Matijcio. (It had wanted to celebrate the building’s 10th anniversary last year but couldn’t get Hadid to come.)

Richard Rosenthal, for whom (with wife Lois) the center is named after they gave a major donation to its construction, continues to find it an impressive architectural feat.

“I am thrilled with the building,” he says. “In a very tight footprint, the architect did a good job of filling every inch of space with an iconic building. And it looks as contemporary today as it did on the drawing board. And it will look contemporary for a long, long time.”

The CAC is getting ready to revamp the front lobby to encourage more use, putting in a small café and making other changes that don’t alter Hadid’s signature architecture. It also hopes by fall to reinstall Nam June Paik’s long-in-storage Metrobot sculpture on Walnut Street outside the building. It was a gift from the late Albert Vontz Jr. for the city’s 1988 Bicentennial.

It’s easy these days to see that the CAC is making good judgment calls with its current programming — New York seems to follow its leads. JR, the French street artist who had his first solo museum show at the CAC last year, is currently “choreographing” for the New York City Ballet, another first.

Currently MoMA PS1 has the largest U.S. survey to date for Austrian painter Maria Lassnig, who died last week at age 94, calling her “a pioneer in many areas of art today.” Platow’s first big show at CAC was a 2008 exhibition, brought from London, of Lassnig’s expressionist paintings. It was a gamble as she wasn’t well-known in the U.S.

The CAC’s three-year-old performances program also has shown prescience in its bookings. Jace Clayton/DJ Rupture, who debuted his music/theater piece Julius Eastman Memorial Dinner at CAC last year, will be performing it in June at New York’s annual Bang on the Can Marathon.

“I think the performance program has added another layer of contemporary artistic creation, and that’s a really important layer to explore,” Platow says.

The CAC has also increasingly moved outside its own Hadid-designed walls in recent years. Cincinnati-based artist Shinji Turner-Yamamoto accompanied a 2010 museum exhibit with his “Hanging Garden” installation in the empty, deconsecrated Holy Cross Church in Mount Adams. And there have been outside-the-building components to recent shows by younger, activist street artists like JR and Shepard Fairey. The latter accompanied his 2010 Supply and Demand retrospective with murals around town that have become neighborhood landmarks. And Buildering has some community events.

That kind of outreach programming will continue, Platow says, but only if it connects with exhibitions occurring in the building. That is and will remain the primary goal.

“I embrace bringing art to the people, but I also want people to come here because art lives best in a physical space,” she says. “And we put so much care and effort into this. For visual arts, it’s still amazing to see beautiful objects in an amazing environment.”

Looking over the more than 600 shows and events that Contemporary Arts Center and its predecessor Modern Art Society have held, there are many, many highlights. Here’s one writer’s pick, arranged chronologically — you can choose your own by browsing contemporaryartscenter.org/exhibitions/past.

Early in the Modern Art Society’s history, and just before the U.S.’s entrance into World War II, the CAC brought this exhibit by two of America’s leading Modernists to town. It’s especially noteworthy because among the 20 or so paintings and gouaches from Davis — an abstract painter considered a precursor of Pop Art — was his great “Swing Landscape” mural for the Federal Art Project. He wanted to sell it to the Society, which declined, and it later was purchased by Indiana University, where it is the pride of the college’s art museum.

This was the first public exhibition of local resident Johnston’s prized art, which The Enquirer at the time said was one of the nation’s 20 best privately owned collections.  There were 35 paintings shown, including van Gogh’s “Undergrowth,” Picasso’s “Still Life” and Matisse’s “Roumanian Blouse,” and a catalog was produced. Cincinnati Art Museum eventually got her collection — the core of its Modernist holdings.

Some people consider this show, which debuted shortly after President Kennedy’s assassination, one of the CAC’s most important for catching the zeitgeist — the moment everything changed — in America. A choice Pop Art survey, it featured work by Andy Warhol, Robert Indiana, Roy Lichtenstein, Claes Oldenburg and Cincinnati natives Jim Dine and Tom Wesselmann. It was held in Carew Tower space.

A picnic/“happening” with Warhol at CAC was followed by a concert/event at Music Hall Ballroom by the now-fabled Rock band (with Lou Reed) that he sponsored. Tickets were $3.50, $2.50 for students. (No senior discount was listed.)

An odd selection for the Christmas season, this presented videotapes and photo documentation of the performance artist’s work. At the time, some of his recent pieces were “Trans-fixed,” featuring him nailed to the back of a Volkswagen Beetle, and “Shoot,” in which an assistant shot him in the arm with a rifle. He performed a new piece at the CAC during the show.

Not just CAC’s history, but the entire city’s, was altered by the attempt by homophobic and right-wing elements, including some elected officials, to shut down the late photographer’s retrospective because of graphic sexual material. Thankfully, the bad guys lost.

As important as she can be difficult, this African-American artist was exploring issues of personal identity, race and gender before they were recognized as crucial issues for artists of our time. As her reputation grows, this traveling show is seen as a landmark.

This wasn’t the first CAC show to look at the “street art” phenomenon, but its purpose — “these artists are all engaged with the concrete realities and phantasmagoria of contemporary urban life in the United States through their involvement with the youth street cultures of skateboarding and graffiti” — made it a sensation that toured the world. Organized by Aaron Rose and Christian Strike for the CAC and San Francisco’s Yuerba Buena Center, it featured contemporary artists/cultural figures like Shepard Fairey, Spike Jonze, Harmony Korine, Ryan McGinness and Mike Mills as well as their influences.

The first survey of work by this American artist astonished everyone who saw it — beautiful large sculptures assembled with incredibly mundane material like toothpicks, plastic cups and straws. And it brought out the inherent fun of all the nooks and corners of architect Zaha Hadid’s building for the CAC, the Rosenthal Center for Contemporary Art.

The CAC celebrates its 75-year history with a dinner and fundraising auction on Friday, starting at 6 p.m. at the Mercantile Center — CAC’s former location — on Government Square. There is a waiting list for the $175 tickets; email [email protected] or call 513-345-8422.

That will be followed by what could be the after-party of the year from 9 p.m.-1 a.m. at the CAC. It will feature food, drinks, dancing, a photobooth with CityBeat photographer Jesse Fox and a late-night appearance by California performance artist boychild. The CAC is calling the party Diamonds + Debauchery. Guests to the first party may attend free; as a separate event the cost is $75 couple, $100 party of three or $50 per person at the door.