“I believe the statue of Jefferson Davis is a symbol that divides us."

In a press briefing on Thursday about COVID-19 and the protests in Louisville — now centered around the murder of David McAtee at the hands of law enforcement when they fired on a crowd of protesters and the death of Breonna Taylor, who was shot eight times when police broke down her door to execute a search warrant on her apartment in the early hours of March 13 — Gov. Andy Beshear was asked a question about the giant statue of Confederate President Jefferson Davis, standing sentry in the Capitol Rotunda.

“I believe the statue of Jefferson Davis is a symbol that divides us. Even if there are those who think it’s a part of history, there should be a better place to put it in historical context," Beshear said. "I don’t think it should be in the Capitol Rotunda.”

The full-length marble statue of Davis stands about 15-feet tall and was financed through private donations and a $5,000 appropriation by the state in 1934. The chillingly white Davis made his debut in 1936 and was erected "under the auspices of" the United Daughters of the Confederacy.

Also in the rotunda is a 14-foot tall bronze statue of President Abraham Lincoln.

Davis was the president of the Confederate States from 1862 to 1865 — as in the president of the Southern states that literally decided to secede from the rest of the country and start a Civil War because they believed in "states rights"  that black people were property.

When asked if he had the power to remove the statue, Beshear said, "We're looking at that."

Then he added, "Right now, seeing so much pain in our state and across our country, can't we at least realize that in so many of our fellow Kentuckians, people that — again, we're talking about compassion in terms of COVID, we ought to have compassion for all pain — can't we understand in the very least that it is so hurtful to them and doesn't that at least justify it not sitting where it does right now?"

Symbols matter. They reflect our values. So, we need to face a monument to racism as we attack the policy of systemic racism.

Honoring the President of the Confederacy in our Capitol is a symbol of oppression & racism.

Beshear's declaration  — that certainly shocked many a Southerner — comes after Virginia Gov. Ralph Northam announced he would be removing another hulking homage to this country's racist past by  taking down the statue of Gen. Robert E. Lee, which sits at Richmond's Monument Avenue.

"In Virginia, we no longer preach a false version of history. One that pretends the Civil War was about 'state rights' and not the evils of slavery. No one believes that any longer. And in 2020, we can no longer honor a system that was based on the buying and selling of enslaved people. In 2020!," he said. "Yes, that statue has been there for a long time. But it was wrong then, and it is wrong now. So, we’re taking it down."

So as all these traumatic monuments to America's abusive past are renamed, removed or placed in "historical context," let's hope someone finally addresses Stone Mountain. This giant Confederate Mount Rushmore in Georgia — it is actually bigger than Rushmore — was finished in the 1970s and features images of President Jefferson Davis and Generals Robert E. Lee and Thomas J. "Stonewall" Jackson in high relief. People actually pay money to see this. A visit here is included with a "history" ticket pack. 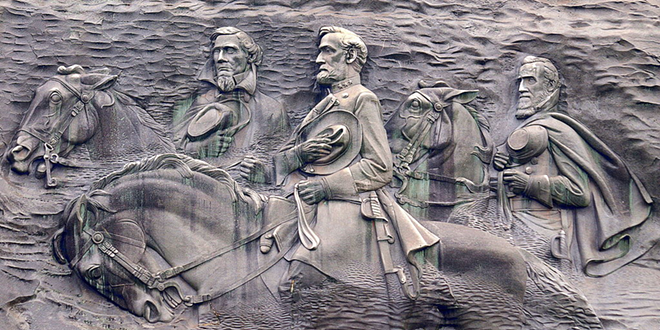