It was the keen eye of photographer and close friend Chuck Madden who first caught the clues on Walk The Moon's Facebook page that seemed to indicate the band would be doing something special for their fans at Bonnaroo this weekend.

On little more than a hunch Chuck insisted that we check out "Kaleidoscope Space Tribe" at 3 p.m. on the Sonic Stage. Sure enough, at five past the hour WTM bounded out on stage and proceeded to artfully bash through a 30 minute set of Talking Heads songs including "Girlfriend Is Better," "Burning Down The House," "Psycho Killer" and more. Considering the huge crowd they played to just two nights ago in the Other Tent, this performance was an ultra rare treat for the clever and faithful two or three hundred fans who figured it out.

Dwight Yoakam seemed mildly irritated at Saturday's 4 p.m. press conference. Perhaps sensing that the Bonnaroo press corps might be too young to know his story, Yoakam quickly sketched a casual crash course on his career dating back to the ’80s. Rather unexpectedly, Dwight struck up a rapport with fellow panelist, comedian Reggie Watts, as the two of them discussed their mutual love of Hee Haw.

Dwight's 7 p.m. performance in That Tent began with an eight-song medley during which the band never paused for a breath, rocking through one continuous segue that included the songs "Please Please Baby," "Little Sister," "Streets Of Bakersfield" and Buck Owens' classic, "Act Naturally."

Other highlights from Saturday were Beach House, Bjork, Nas, Gov't Mule, Billy Idol, Weird Al Yankovic and the two-man riot JEFF the Brotherhood. Jack Johnson and his band did a great job filling in for Mumford and Sons, even performing one of their songs. 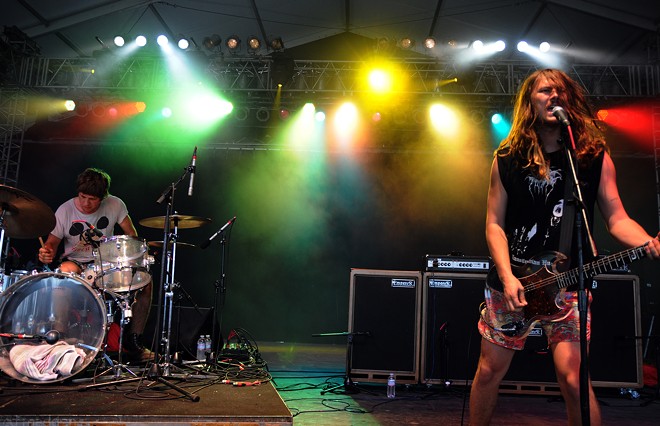