The first featured a stiff J. Crew catalog-worthy man presenting his fiancée’s daughter with an identical necklace to one he had given his fianceé. “I’m so happy to be marrying your mom. You know that, right?” The stepdad-to-be presents the young girl with the gift. “It’s just like yours, mom!” Everyone is smiling and hugging and kissing. The cloying situation is exacerbated by the fact that the necklace is part of the (rather unattractive) ‘Open Hearts’ collection by Jane Seymour (aka Dr. Quinn, Medicine Woman), which has a sappy message — “Keep your heart open and love will always find its way in.” Not to mention, this isn’t such a good gift idea for someone who has had or might one day need open heart surgery…

Among some of the more uncouth YouTube comments are mentions of how this is from the “I’m doin yer ma” collection and how the man could mistakenly appear to have questionable intentions with the adolescent girl. All true. And what’s up with the misleading suggestion that a kid would ever need or even want an expensive piece of jewelry as a gift? My boyfriend’s ten-year-old cousin has LEGO Friends and video games on her Christmas list, not a $200 necklace that she’ll lose in a day.

And then there was the infamous Cabin in the Woods meets American Psycho ad, in which a Patrick Bateman-esque man surprises his lover with a necklace from the ‘Love’s Embrace’ collection after stating, "I'm right here... and I always will be.” (Cue sinister laughter.) This occurs amid lightning, thunder and overall ominous vibes. The woman loves it. Maybe it’s because he’s surrounding her with the “strength of his love” by presenting her with a “diamond that captures the comfort found in each others’ arms.”

Ugh. So why exactly were these uncomfortable Kay commercials ruining my otherwise great Hulu Plus experience? The answer may lie in the fact that it is currently “engagement season,” a prime time for these advertisements. Thank you, Jezebel for bringing this to my attention. 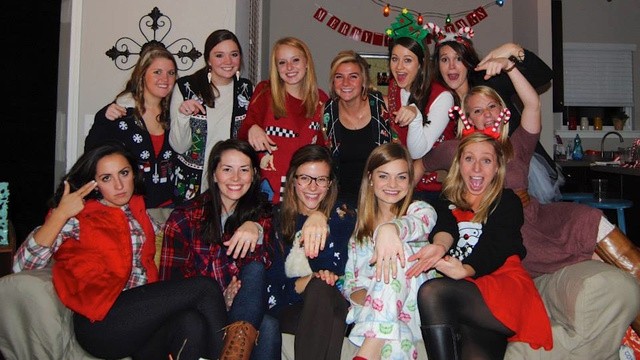 And, more importantly, for the bringing this picture to my attention

I had no idea the holiday season — that glorious stretch of time between Thanksgiving and Valentine’s Day — was also known as “engagement season,” as disturbingly dubbed by women’s magazines. For example, Glamour Magazine has a 2012 online article titled, “Happy First Day of Engagement Season! Who's Expecting a Proposal in the Next Few Months?” on November 22 of that year. WeddingChannel.com has a similar article: “9 Ways to Know It’s Engagement Season.”

Approximately 39 percent of all marriage proposals take place between the holiday months. Sure, I’ve witnessed more than one friend on my Facebook newsfeed get engaged during this time frame (because, you know, it’s pretty inevitable when you’re in your twenties and use social media), but was unaware that this is some sort of national trend.

But now that it’s been brought to my attention, I can see why this trend exists. The holiday season is a family-centric time. People are able to take days off work and enjoy plenty of blithe celebrating with loved ones. If you’re the kind of person who wants to get married, now might be the time to make your move. Jewelry commercials cater to this big time.

And just to make myself clear, I have absolutely nothing against people getting engaged around this time or any other time. In fact, someone very close to me recently got engaged and I was lucky enough to be chosen as her maid of honor. I am genuinely happy for anyone who is genuinely happy. I don’t even have anything against jewelry stores in general, unless they are full of blood diamonds or other unethical practices.

I do, however, have a problem with commercials that portray males as saps who win their girlfriends’, wives’ and apparently stepdaughters’ affections through gold and silver diamond-studded necklaces, earrings, bracelets and rings shaped like open hearts and warm embraces — ads that depict women as shallow creatures who are at their happiest when presented with sparkly stones. I dislike the season’s “endless subliminal hum of advertisements for engagement rings,” as noted by Jezebel. But ultimately, that is the nature of consumerism, and it’s effective.

The holidays, engagement season aside, are chock-full of commercial spending and advertising. Even lesser-known Hallmark Holidays such as Boss’ Day and Sweetest Day rake in cash, so it makes perfect sense that people break the bank around Christmas. The Gallup Economy’s Oct. 21 article, “Americans' Holiday Spending Not Shut Down by Shutdown,” states that "underscoring the importance Americans place on holiday gift giving, 30% — identical to last year — plan to spend at least $1,000, and half plan to spend at least $500. Only 3% intend to spend less than $100."

So if not for the purpose of engagements, jewelry commercials portray that the time is ripe for men to splurge on their significant others with the perfect piece of jewelry for the holidays. But I would never want my boyfriend to feel pressured to pop the question or buy me such superfluous adornments, especially in an attempt to prove his love (as that would be entirely unnecessary). Some of us just want Hulu Plus to get rid of their commercials for Christmas, so instead of being enticed by jewelry, we can get back to The Colbert Report.