Bunburied Alive … and Lovin' It

Reflections on the final day of the inaugural Bunbury Music Festival 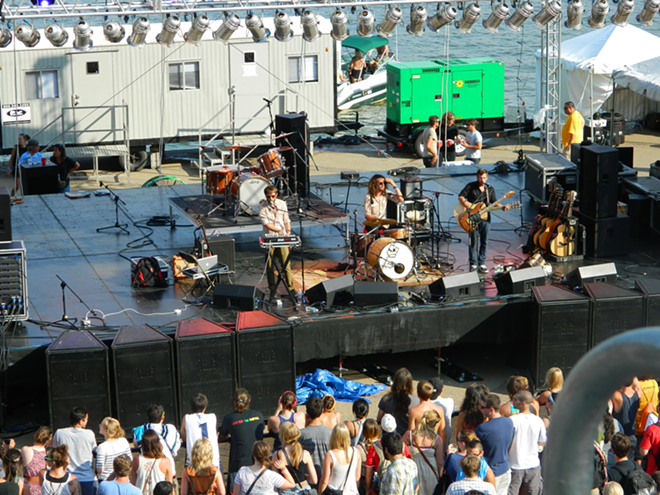 I’ve been to more festivals than I care to recall, but they mostly pale in comparison to Bunbury’s inaugural weekend. The planners of the three-day Cincinnati festival scored awesome bands for a first-year festival and the location couldn’t have been more spectacular, stretching from Sawyer Point to Yeatman's Cove along the riverfront.

Bonnaroo sucks because there are hardly any trees and therefore no shade — it’s like spending a weekend on the sun. While the fairly awesome, Memphis in May offers a similar riverside locale, but it’s also missing the shade and it fails to take full advantage of its riverfront property.

The Bunbury planners nailed it. Not only does Sawyer Point offer plenty of tree-covered walkways between stages, but also grassy knolls, flushing toilets and a great breeze.

And the Landor Stage! Whatever genius said, “Let’s put a stage at the base of the Serpentine Wall,” deserves a raise. The river and Big Mac Bridge were excellent backdrops for the bands lucky enough to play there and a great way to show off some of Cincy's charm to festival goers from afar. I saw Good Old War perform to a packed … "wall," and it was by far the coolest and most laidback of the shows I caught. Watching everyone lounge around on the huge concrete steps while listening to the trio play music and goof off was a great break from the shuffling and shifting crowds just a few feet behind us. The band's drummer did a pretty great impersonation of Harry Belafonte and sang “Day-o” for us, which worked well with the sunny sky and chilled-out vibes on the wall. Even better was how loud the crowd got when he sang, “Daylight come and me wanna go home.” Hardly anyone knew the rest of the words, but they had fun pretending. Good Old War was probably my favorite performance and Landor Stage was definitely my favorite place to hang out.

Another great way Bunbury made sure to represent the Cincinnati spirit was with tons of local food and beer. Not only did they have the big names, like Skyline and LaRosa’s, but they also brought in places like Taste of Belgium and beer from Hudy. (Sure, some UDF or Graeter’s would have also been nice, but it was only the first year.)

Speaking of food, I was overwhelmed by the lack of food I saw on the ground, neither dropped nor regurgitated. Cincinnati did an excellent job at keeping their park clean, even when they flooded it with feet. I was super proud (and relieved) to not have to step over any up-chucked chilli on my way various jaunts from one end of the park to the other.

And that’s a trek I made quite a few times, too. From The Tillers to Good Old War and then back to the far end to see Bad Veins, I spent a good deal of my Sunday slipping through the crowds to get from one end of the point to the other as quickly as possible.

It was worth it, though, especially for The Tillers!

I own The Tillers’ first two albums, but I’d only seen them once before, at one of their usual spots — Northside Tavern. It was a night where they went on late and I happened to be with more introverted friends. It was a good show, but it lacked the oomph I experienced at Bunbury. Those boys were made to play in the sunshine and trees, that’s for sure. And Cincinnati made sure to show love to their hometown band. Hopefully, Mike, Sean and Aaron picked, bowed and bellowed their ways into some new hearts, as well. Their show sealed the deal on The Tillers being one of the many reasons why I love Cincinnati. We’re the kind of people where their kind of music can be properly loved and respected for exactly what it is and never expected to be anything more.

Those were the highlights of my day, but I’d say the whole experience was a good one. Musically, there were really only two downsides to the fest and they were both pretty personal. To begin with, I think Neon Trees really lose their appeal in the daylight. They are everything that’s glowing, neon or flashing. They sing songs that, when sung along to, require sassy facial expressions and overly dramatized hand gestures. These are things that are best done in the dark.

I also wasn’t thrilled with Death Cab for Cutie, though I know I’m in the minority on that one. Here’s the thing, though:  “I Will Possess Your Heart” is really freaking creepy and “I Will Follow You into the Dark” is the exact opposite of the kind of love I want. I’m fairly certain anyone who’s ever been the person least committed to a relationship will understand my sentiment.

Still. Those things were minor. Most important is that Sunday was a good day and Bunbury, in my summation, was a huge success.

Writer’s note: There were a few things I thought worth mentioning but not worthy of the effort of a more fluid insertion into the above review. I’d like to add the following whimsy, as long as I won’t be sacked. Otherwise, just leave it off. (Editor's note: These are hilarious. You get a raise — two free movie passes next week!)

• Apparently making cut-offs from Mom jeans is a fashion trend. I reject this.
• Next year I’d like to rent a boat and spend one afternoon experiencing Bunbury from the river with the rest of the freeloaders.
• Seriously. I’m really proud of you for not puking in public.
• To the lady in the wheelchair with her legs stuck directly out in front of her: Are you sure you couldn’t find an even less convenient position in which to ride? (Editor's note: This may be offensive; see me.)
• I saw a New Kids on the Block tattoo and I still have no idea how I feel about it.
• Can we try to get an ice company to sponsor a stage next year? I really hate my beverage lukewarm.
• I’d still prefer a festival that took place in December or January. (Name suggestions: Bit Nipple-y Concert Series and Freeze Your Balls Off Fest)

Click here for our photo gallery by Jesse Fox featuring over 150 shots from Bunbury weekend. And keep checking the music blog for more post-game coverage. Sorry for the delay — r tender li'l brains got a bit frieded dis weakened.