The lawsuit filed on Thursday also accuses the company of engaging in a “cover up.” 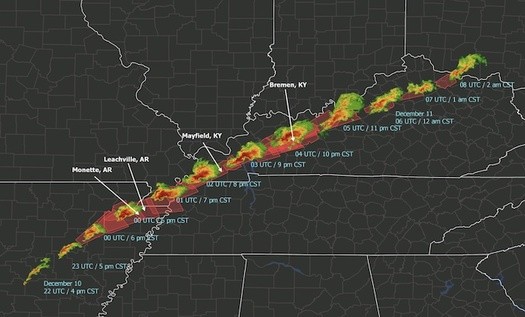 Photo: TheAustinMan/Wikimedia Commons
Radar imagery of the devastating tornadoes that moved across several states — including Kentucky — on Dec. 10 and 11, 2021

Eight survivors of the Mayfield Consumer Products candle factory collapse have lodged new allegations against the company in an expanded lawsuit filed in Graves County Circuit Court on March 3.

The new complaint adds to a previous lawsuit filed by plaintiff Elijah Johnson, who claimed Consumer Products supervisors threatened to fire workers who left the factory as a deadly tornado approached on Dec. 10. Seven other named plaintiffs join Johnson in this new complaint. Together they claim the company did not allow them to leave the factory for their safety, did not train employees in emergency safety protocols and only had one hallway and two bathrooms to shelter 110 employees during the storm.

“Further investigation has revealed the depth of the liability and willful acts that caused these harms,” said Attorney Amos Jones, of Washington, D.C., who is representing the plaintiffs.

The tornadoes that devastated western Kentucky in December killed at least 80 people, according to state officials.

The lawsuit filed on Thursday also accuses the company of engaging in a “cover up” by hiring the D.C. based PR firm The Hawksbill Group to deny the claims made by Johnson and other factory employees.

Representatives for Mayfield Consumer Products have yet to respond to the allegations in court and have not responded to requests for comment.

The new lawsuit includes details from the night of the storm from people like plaintiff John Lawson. Lawson had recently moved to western Kentucky from Reno, Nevada. According to the complaint, he had only been working at the candle factory for a week. As the weather became more severe, Lawson claims he asked a supervisor if he and other workers could leave the factory. Lawson claims the supervisor said anyone who left the building may lose their job.

When Lawson questioned further, the supervisor responded “welcome to Kentucky.” The complaint claims that, 13 minutes after this comment, the tornado destroyed the factory, burying Lawson and others in the rubble. It took emergency responders three to four hours to dig Lawson out from underneath the collapsed building.

Workplace safety regulators fined Mayfield Consumer Products in 2019, and the company has previously been accused of discriminating against employees.

This article first appeared on Kentucky Center for Investigative Reporting and is republished here under a Creative Commons license.