A Hamilton County Municipal Court Judge has dismissed the charges against 35 Black Lives Matter protesters, who were arrested in Cincinnati between May 29 and June 1. 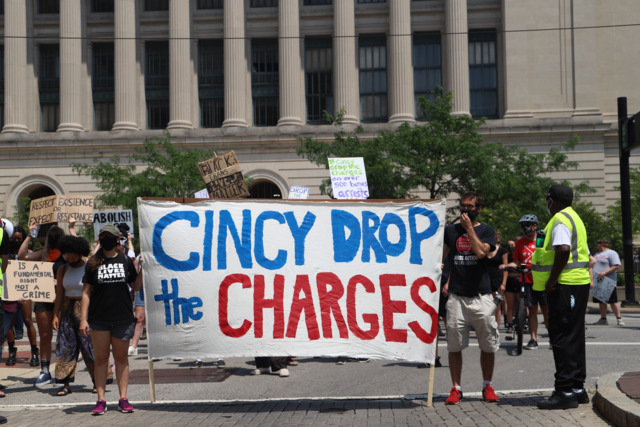 Photo: Nick Swartsell
Marchers outside the Hamilton County Courthouse on July 7, demanding first degree misdemeanor charges be dropped against roughly 500 people who protested racial disparities in policing in the Queen City in late May and early June

A Hamilton County Municipal Court Judge has dismissed the charges against 35 Black Lives Matter protesters, who were arrested in Cincinnati between May 29 and June 1.

Protests against the death of George Floyd and other Black citizens drew thousands in Cincinnati this summer — and a heavy police presence, with officers sometimes in riot gear and deploying pepper spray and flash bang explosives.

In the aftermath of marches on the first two nights, small groups broke windows downtown and in Clifton Heights. As a result, Cincinnati Mayor John Cranley instituted several curfews, leading to the arrest of roughly 500 people on first-degree misdemeanor charges of Misconduct at Emergency — basically a curfew violation — which can result in 180 days in jail and a $1,000 fine.

Protesters and their advocates, including several attorneys, said the arrests constituted a violation of the First Amendment. The city said it was keeping the peace after a few individuals broke windows following some protests.

"This curfew didn't happen because everything was going great," he told city council then. "We had to do this because of the amount of damage. We have over 100 businesses that have been damaged, looted, shots fired into them."​

The city offered several options for protesters to drop or reduce their charges, albeit with conditions: dropping their charges in exchange for an agreement they won't sue the city, participation in a diversion program after which the charges are expunged after 30 days or reduced charges in which fines and court costs are waived.

In July, Cincinnati's Mass Defense Coalition filed a motion to dismiss the charges against all those arrested, saying the Misconduct at an Emergency charge was "used solely for the purpose of corralling people and preventing protesters from remaining on the streets and exercising their human rights protected by the First Amendment."

In her decision today, Judge Janaya Trotter Bratton said she dropped all 35 cases because Cranley's curfew was unconstitutionally vague.

Trotter Bratton said exercising your First Amendment rights was considered an essential activity by the Ohio Department of Health during the COVID shutdown and that "the curfew did not define 'essential workers' — who are included in the list of exempted people," says a release from the Mass Defense Coalition.

There are still at least 425 protest cases pending before the Hamilton County Municipal Court and Mass Defense Coalition says they will continue to fight for dismissal.

After the filing in July, Mass Defense Coalition attorney Jacqueline Greene said the options on offer weren't good enough and that protesters' constitutional rights were violated.

"In terms of the options, what they're essentially asking people to do is enter into a plea deal. Don't be confused by the dismissal option. You'd have to waive your rights to engage in any kind of civil rights litigation after this — people who were wrongfully targeted, wrongfully arrested and jailed in horrendous conditions, some of them. That's not right."