Due to increased interest in how this year's budget is being divvied up — specifically the portion being spent on police — the City of Cincinnati has added a third public input session starting at noon on Friday, June 19 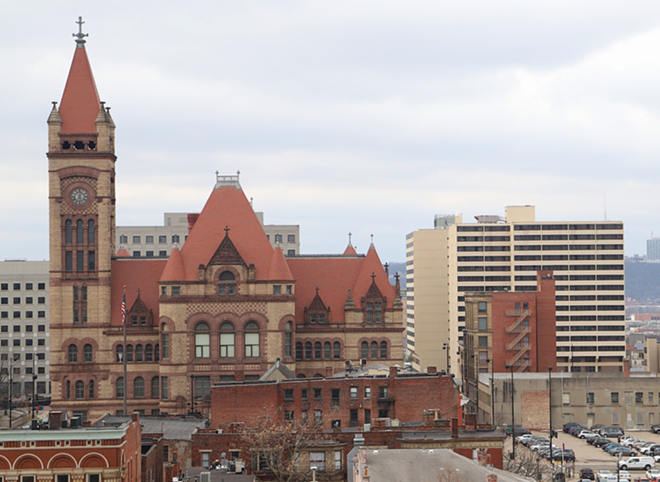 Cincinnati Mayor John Cranley and City Manager Patrick Duhaney have proposed a budget for the city, and Cincinnati City Council must approve it by June 30 ahead of the first day of the new fiscal year July 1.

Due to increased interest in how this year's budget is being divvied up — specifically the portion being spent on police — the City of Cincinnati has added a third public input session for residents and increased the hours for the other two previously scheduled sessions.

Residents can show up in person and sign up to speak for two minutes, or they can fill out an online form to submit comments via audio or video.

Residents can also email the mayor, city manager and council members with their feedback.

The sessions will all take place in the Duke Energy Convention Center downtown, which says it has arranged 500 chairs, six feet apart, and will be limiting attendance to 500 people. They will also be providing masks; masks use among attendees is highly encouraged. 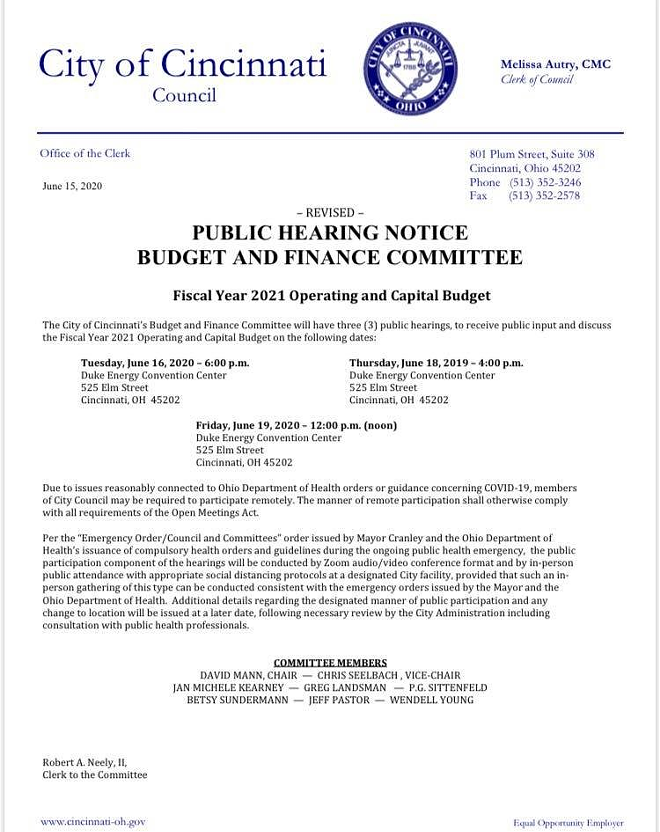 It's going to be an especially tough — and important — debate this year. The coronavirus pandemic and its attendant economic devastation has caused a $73 million budget deficit for the city, which gets most of its revenue from local earnings taxes. The University of Cincinnati Economics Center has estimated that the city will bring in $41.5 million less in those taxes this year.

Meanwhile, protests around the police killing of George Floyd in Minneapolis have trained a laser focus on major cities' police budgets, and Cincinnati is no exception. The city currently spends more than 36 percent of its operating budget — $151.7 million — on police.

So far, the city has cut some $32 million from its budget, mostly by instituting large cuts to many departments — 25 percent or more — and slashing funding to outside organizations that provide human services and economic development work.

The new budget proposal from Duhaney increases the police budget to $152.6 million — a point brought up in today's Budget and Finance Committee Hearing.

According to budget summary, most of that uptick in police spending comes from FOP contractual increases (wages, pensions, etc.), overtime and a body camera contract.

But, council member Chris Seelbach, vice chair of the Budget and Finance Committee, asked Duhaney if this is how the city should be spending its money.

Seelbach read what he said was one of 10,000 emails council has received in the last week — 781 which he said he personally had received since yesterday — "almost all of them have to do with the budget and what's happened after the murder of George Floyd," he said.

He then read one citizen's letter to summarize his point about systemic change, moving money away from police funding and reallocating those resources into health care, housing and education.

"The budget presented in front of us by you and the mayor does the exact opposite," Seelbach said to Duhaney. "As we can see, 70 percent goes to police and fire; 30 percent goes to everything else. And when I say 'everything else,' I mean 17 other departments, from Economic Inclusion to Parks to Recreation to Public Services to Buildings & Inspection, Community & Economic Development, Transportation. All of that only gets 30 percent. And it's clear in the last 21 years all we have done is cut these 17 departments while increasing staff in police and fire."

Seelbach asked Duhaney what his response would be to the 10,000 people about why the city doesn't take money out of the police budget and place it into other areas that would address the issues he says are at the root of many criminal issues by providing jobs, health care and housing?

City Manager Duhaney replied that that's a policy question — which isn't his jurisdiction; it's council's — but that he has to fund a holistic city, and that maintaining public safety and keeping murder rates and shootings down is also important. He also noted that the city in general and the budget are inadequately funded.

Council member David Mann, chair of the Budget and Finance Committee, noted that as a result of the chaos around COVID-19, the city did not adopt budget policy directives, but that for the past seven years, council has said they want to maintain current police and fire staffing.

"Now, if that's not our position, say so," Mann said. "It's up to us to remake the budget. I think it's very unfair to say Mr. Manager, the society is demanding change, and you haven't provided change. I don't see why you expect him to make those recommendations? If they're to come, they're to come from us, in my opinion."

Council member Wendell Young, a former member of the Cincinnati Police Department, said, "At the end of the day, I think we decide what that budget's going to look like. And I would agree with the manager — the policy is on us."

"As policy makers, we need to take a look at the finances we get and figure out if the money we're putting in to safety is really giving us the biggest bang for the buck. I think the writer (of the letter Seelbach read) is suggesting that it might be feasible to take a good, hard look at taking money from safety and investing it in trying to eliminate some of the root causes that perhaps give rise to the fact that we believe we need as many cops as we do," Young continued. "It's obvious that the issues facing us today, we certainly see we cannot police our way out of racism, we cannot police our way out of substandard housing, substandard education, we cannot police our way out of people not being able to find adequate jobs to support themselves and their families with and I think we're also realizing that the issues we face today as a society cannot be solved — in fact they've never been solved by police."

Council member Jeff Pastor said, "I know there are several people who have asked folks to defund the Cincinnati Police Department and I just wanted to make it very clear that CPD is a leader in the country. I think that because people have rightful grievances against police officers — some as recent as a few weeks ago because of their response to the protesters — I get that. But we have a CCA (Citizen Complaint Authority). And I think that there is probably unanimous agreement that we are going to fund a CCA so that we can evaluate those complaints. When you have reform, reform takes money. When you want accountability, accountability takes money. In my opinion, because we want those things, because we want to see CPD be an even greater leader in the City of Cincinnati, I don't think this is the time to defund or abolish the Cincinnati Police Department."

And if you want to appear at a public hearing by video or audio, you need to sign up here.