Council could soon vote on a proposal that would put $75,000 in a fund for Monica Williams, whose Just Cookin' restaurant had to move from its West End location to make way for FC Cincinnati's coming stadium. 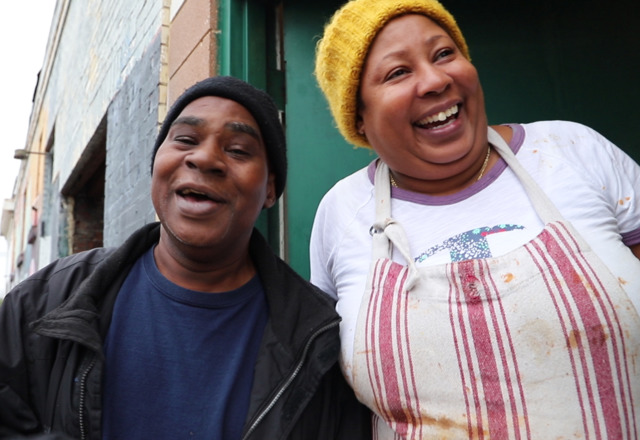 A small business that had to move late last year to make way for FC Cincinnati's coming West End stadium could get some help from the city soon.

Cincinnati City Council member Greg Landsman today introduced a proposal that would help Just Cookin' owner Monica Williams with an additional $75,000 from the city for relocation costs. If council passes Landsman's ordinance, the money would be held in fund by the Urban League of Greater Southwestern Ohio until Williams finds a new location and draws up a full financial plan to relocate there.

Williams ran her soul food restaurant Just Cookin' from the side of the State Theater on West 15th Street until November last year. Williams and two other businesses — a barber shop and corner store — were both asked to leave by building owners Lighthouse Worship Center because the church was in the process of selling the property to FC Cincinnati. The operator of the barber shop also lived above the shop and had to relocate his home.

CityBeat first reported on the situation of Just Cookin'  — and that of the two other businesses and one tenant in the building — in June. The State Theater is still standing but is slated for demolition soon.

Since leaving the State, Williams says she has had difficulty finding a new location in the West End for her restaurant. The team originally gave her $20,000 in relocation expenses — less than the estimated $400,000 in build-out costs contractors have quoted Williams for a suitable space on Linn Street. The team, which has also suggested a location downtown on Court Street, has since come back with offers of more assistance, including future help with rent, but those offers haven't quite closed the gap.

The total package of financial help offered Williams by the city and the team could reach $250,000. FC Cincinnati will reportedly provide a total of $170,000 and the city will kick in $75,000.

"My livelihood is at an all-time threat the longer I stay unemployed," Williams told council last month. She has since taken a third-shift job at Kroger to pay her bills, she says. "It's emotional for me right now, because I used my own money to start my business. Never once have I had to ask for help. I don't like asking people for help. Where do you go? This situation could easily be over with."

Williams' mother, grandmother, nephew and niece all worked at the restaurant, which employed eight people in total.

"I've seen it grown from nothing to something," he said last month. "I've lived in the West End my whole life, and I've seen a lot of changes in the neighborhood just from having Just Cookin' there. I just want her to continue to grow. She needs a better chance as far as Just Cookin'… a better opportunity."

Council could consider Landsman's proposal as early as Thursday. The money comes from a reserve account for weather and other emergencies.

Landsman also floated an idea that has popped up a few times in the past couple months: Williams relocating to a food truck until she finds a permanent location. He suggested that she could lease land from the Port for a dollar in order to get back to work.

“The city will, I’m hoping, provide assistance so everyone is in this together working to make sure that what was a very successful business in the West End continues and grows,” Landsman said today.