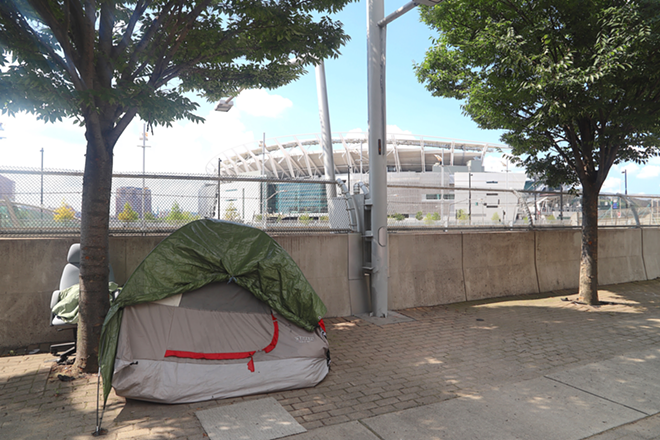 You can now pay your Hamilton County speeding tickets, moving violations and court fees online — a big change from the county’s previous practices of requiring in-person or mail-in payments. Cuyahoga and Franklin counties already have the online payment options, and Hamilton County is just now getting up to speed. Counties that have instituted the online payment system saw an average 14 percent increase in fee revenue in the year they rolled out the easier payment process, and Hamilton County Clerk officials believe the change could net the county an extra $1.5 million a year. Sometimes out-of-towners don’t go to the trouble of mailing in their tickets or swinging back through in person to pay them. The county tracked $500,000 in outstanding moving violation fees alone last year.

• Acting Cincinnati City Manager Patrick Duhaney says he wants plans to address a camp on Third Street near Plum Street downtown where people without homes have been living. In a recent memo, Duhaney called on city departments, social service groups, the Cincinnati Center City Development Corporation and business groups to find a solution that is “humane and budget-wise” for the camp.

"Since the encampment has become a concern some have advocated for the city to simply post notice for the individuals to vacate the area and arrest those who do not relocate," Duhaney wrote in the memo. "However, this would be a very delicate situation for the police department. While some individuals may be arrested on a case-by-case basis, we do not believe arrests alone will solve the problem given the legal and social complexities of the issue."

Duhaney goes on to write that leaving the camp as it is and having city crews occasionally clean the area is also not feasible.

It's unclear what other solutions might entail. It's not the first time the city has tried to move people without homes from the area: Last year, controversy broke out when the city began removing concrete benches some people had taken to sleeping behind after complaints from nearby businesses. After push back from social service groups, the city halted the bench removals.

• University of Cincinnati researchers are probably buzzing (I’m sorry) about a new partnership with the Ohio Department of Transportation that will use drones to study traffic in the Queen City. The project will generate three-dimensional images of traffic flow on Martin Luther King Jr. Drive and Clifton Avenue and the I-75 exit at Mitchell Avenue. Researchers might also use the drones to scope out the conditions on the Western Hills Viaduct and Brent Spence Bridge.

• A former Procter & Gamble executive is now the CEO of a company seeking to become “the Whole Foods of the cannabis industry.” Brian Athaide, one-time chief financial officer for P&G in Russia and Central Asia, has joined Toronto-based Green Organic Dutchman Holdings Ltd., a four-year-old company which cultivates medicinal marijuana in Canada and Jamaica and has its eye on expanding into beverages made with cannabis.

• Officials with the state of Ohio and Ohio State University broke ground yesterday on a $45 million, 540-acre test site for self-driving cars near Columbus. The project, called the Smart Center, will allow researchers to test self-driving cars on a variety of road and intersection types that replicate diverse real driving conditions. The center should have its first portion open by the end of the year.

• The state of Ohio will give a $3 million grant to a company that is working to develop prescription pain medication that doesn’t cause abuse. Elysium Therapeutics says it is working on a new class of opioid pain relievers that aims to “protect users from oral misuse, abuse and fatal overdose.” The company, and state officials, say they believe the potential drug could help address Ohio’s continued opiate overdose crisis. But some addiction experts are skeptical, saying that the ship has long sailed on improving prescription drugs and that many users in Ohio are hooked on heroin, fentanyl and other illicit drugs. Elysium CEO Greg Sturmer acknowledges a new prescription pain medication likely won’t help those already hooked on heroin, but says it could keep many more people from becoming addicted to opiates in the future.

• President Donald Trump announced yesterday that he has selected Brett Kavanaugh as his appointment to replace retiring U.S. Supreme Court Justice Anthony Kennedy. Kavanaugh is an insider in Washington, D.C.'s legal community and a staunch conservative who once clerked for Kennedy. His appointment would likely tilt the court to the right and has drawn outcry from Democrats and concerns from activists for abortion access and other issues.