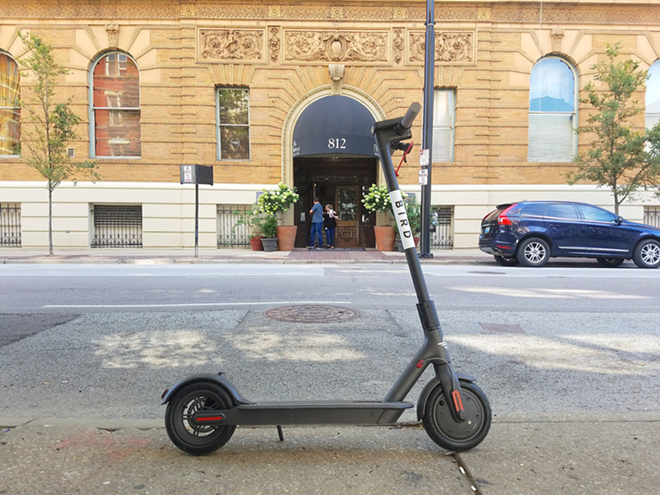 If Cincinnati City Councilman David Mann gets his way, the company that provides electric rental scooters could be liable if anyone is injured due to behavior from their users.

Mann today announced a motion that would hold California-based Bird Rides responsible for injuries scooter riders cause should the riders themselves not be able to pay for them. The legislation comes after at least one incident in which a pedestrian had to go to Urgent Care with minor injuries after a teenager hit her with a scooter.

The scooters, which are limited to 15 miles per hour, have become popular in Cincinnati. But their dockless design — riders can leave them anywhere — and the fact they popped up overnight in Cincinnati earlier this summer without warning to public officials have made them controversial. Some say riders aren't considerate of pedestrians, leave them scattered on sidewalks and cause other nuisances.

Nashville, Denver, Austin, Miami and Louisville have all enacted at least temporary bans on the scooters over similar concerns.

"Bird is a profit-making activity which has landed here for one purpose, to make money for someone," Mann said in a statement about his motion. "Profit is fine but the damage inflicted by any enterprise must be assumed by the business, not an innocent public."

The city and Bird came to an agreement earlier this month that leaves the city without liability for the scooters. The city later agreed to let Bird increase the number of scooters here — up to 200 — but Bird would like to bring even more. The city will have to approve that request, but since Bird's policies set aside a dollar for the city for every scooter on the street each day, officials have some incentive to allow more scooters here.

City officials have worked to try and mitigate concerns. Cincinnati's Department of Transportation and Engineering recently released guidelines for use of the scooters, which include not using them on sidewalks, watching out for pedestrians, and following traffic laws. Mann says that many times, those rules are not being followed.

"My personal observation is that a huge proportionate of the Birds are being used in violation of the basic guidelines – on sidewalks, in pedestrian crosswalks or violating traffic signals," he wrote. "Some people have already sustained injury.  Others will follow."

The city won't be liable for those injuries, Mann says — but under the current arrangement, it's unclear if Bird would be, either.