It was a great week for international travelers and a rough week for Swifties. 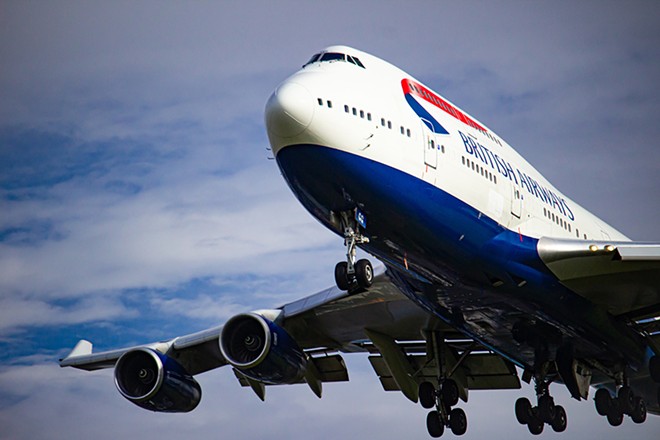 Taylor Swift is making headlines for yet another week in a row, this time for the less-than-positive experience (to put it lightly) fans had during the mad dash to purchase tickets for the singer's "The Eras" tour on Nov. 15. In lighter news, Greater Cincinnati's CVG Airport announced that it will soon have direct flights to London, England. Catch up on this week's major headlines below.


Direct Flights to London from Greater Cincinnati's CVG Airport Coming Summer 2023
God save the Queen City! Cincinnati will soon have direct flights to London, England thanks to a new service from British Airways. Flights will start in Summer 2023 and tickets are already available on British Airways' website, with the first flight on a Boeing 787-8 scheduled for June 5. The new flight path, which is listed online as lasting just under eight hours, will be the only direct flight to London from Ohio, Kentucky and Indiana. Read CityBeat’s story to find out how much a ticket to London will cost you.


J.D. Vance Gets Out of Jury Duty for Starting 'New Job'
Senator-elect J.D. Vance, who lives in Cincinnati's East Walnut Hills neighborhood, got out of jury duty this week. The reason? Starting a “new job.” Vance tweeted a picture of himself outside the Hamilton County Courthouse on Nov. 14 saying he was dismissed from jury duty because his U.S. Senate orientation kicks off this week. But a Hamilton County courthouse official said Vance isn’t quite out of the woods yet for his civic duty. Read CityBeat’s story to find out when Vance could potentially return home for jury duty.

Medical Marijuana To Be Legal In Limited Circumstances In Kentucky
Kentucky Gov. Andy Beshear used an executive order on Tuesday, Nov. 15 to effectively legalize medical marijuana for Kentuckians diagnosed with 21 “severe” medical conditions, ending the Commonwealth’s longstanding total prohibition of the drug. The catch is that the marijuana must be legally purchased out of state. Read CityBeat’s story for some of the conditions required to legally obtain marijuana.

Pete Rose Once Again Asks MLB to Consider Him for Baseball Hall of Fame
Former Cincinnati Reds player and manager Pete Rose has sent a letter to Major League Baseball Commissioner Rob Manfred requesting, once again, to be considered for inclusion in the National Baseball Hall of Fame and Museum. Rose was barred from enshrinement in 1991 after a report alleged Rose had gambled on baseball games, including while managing the Reds. The timing of the letter comes as sports betting finally becomes legal in Ohio. Read CityBeat’s story for what Rose said in his plea for official notoriety.

Cincinnati Fans Still in Virtual Line for Taylor Swift Tickets Hours After Start of Verified Presale
The ticket-buying experience for Taylor Swift’s “The Eras” tour has been an absolute shit show. On Nov. 15, fans waited for hours in a virtual queue for pre-sale Taylor tickets, only to be booted offline, hit with error messages, or sent back to the front of the queue. Ticketmaster said the demand for “The Eras” tour was “unprecedented” and ended up canceling the general admission sale scheduled for Nov. 18. Read CityBeat’s story on the lengths Cincinnati fans went to secure their Tay-Tay tix at Paycor Stadium.

Cincinnati Mayor Aftab Pureval Announces New Gun Laws, Zoning Changes During State of the City Address
Cincinnati Mayor Aftab Pureval made his first State of the City address from Union Terminal on Nov. 15, unveiling new changes that would “change the very face of Cincinnati.” The newly-minted mayor's address comes days after the release of a glowing feature from Politico Magazine that referred to him as “Barack Obama Junior.” Pureval promised during his address to protect renters from absent landlords and to expand pedestrian-first infrastructure. He also announced two new gun laws: one that will require safe storage of firearms, the other a law that keeps guns out of the hands of domestic abusers. Read about what CityBeat heard at the mayor’s first State of the City address.

Cincinnati City Manager Announces Final Candidates for Police Chief
Cincinnati’s city manager Sheryl Long has announced the four finalists for the position of Cincinnati police chief. The finalists consist of two out-of-towners and two familiar faces. As part of the selection process, the city says it will host two community forums for the public to interact with the finalists directly. Those unable to attend in person will be able to tune in through a Facebook livestream and on CitiCable. Read CityBeat’s story to find out who is up for the top job.

The Gift Guide: Cincinnati’s Favorite Boutiques Where You Can Shop Local This Holiday Season
The winter holiday season is quickly approaching, and with it begins the mad rush to get the perfect gift for everyone on your list. Finding unique and tailor-made items is a time-consuming and stress-inducing task – but it doesn't have to be. Skip the online shopping and instead take this time to explore and embrace the holidays by shopping in the Queen City with our gift guide. Here, you’ll find 30 local businesses voted the “best” by readers in CityBeat's 2022 Best Of Cincinnati issue, from the best gift shop and best overall boutique to the best record store and best jeweler. Read CityBeat's Gift Guide to find a local gift for every special person on your list.