The letter — signed by the ACLU of Ohio, Hamilton County Public Defender's Office and others — says "In order to silence their critics, Cincinnati police have abused their authority through use of excessive force and unlawful conditions of confinement." 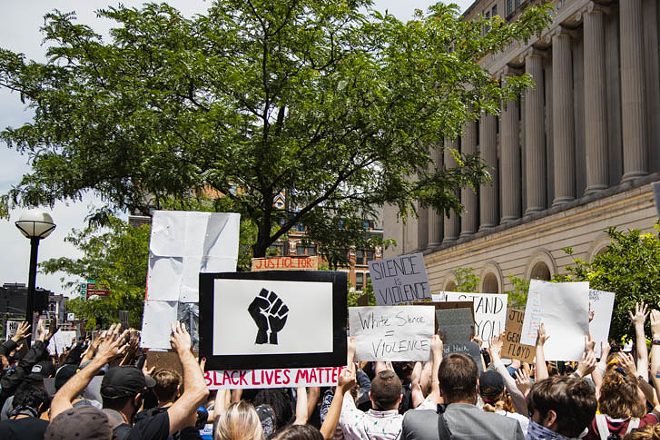 Cincinnati's Mass Defense Coalition — comprised of members of the ACLU of Ohio, the Hamilton County Public Defender's Office, Beloved Community Church, All Of Us Or None, the National Lawyers Guild, the Ohio Justice & Policy Center and others — sent a letter to Cincinnati City Council via email on Thursday, June 4 regarding the arrests and mass detention of protesters on Sunday night, when about 100 demonstrators were arrested and held in the outdoor sally port of the Hamilton County Justice Center.

Those interviewed by CityBeat said they were held for up to 10 hours in the exposed courtyard and that they were not given food, water or blankets until the morning hours. There are also reports of people urinating on themselves both in the courtyard and on the Metro buses in which they were held before being transported to the justice center because they were not permitted access to a bathroom.

The letter, signed by Sean Vicente of the Hamilton County Public Defender's Office; Jacqueline Greene of the Ohio Chapter of the National Lawyers Guild; Rev. Nelson Pierce Jr. and Robin A. Wright of Beloved Community Church; Zaria Davis of the Cincinnati chapter of All of Us or None; Cherise Fanno Burdeen of the Pretrial Justice Institute; Jocelyn Rosnick, policy director of the ACLU of Ohio; David Singleton of the Ohio Justice & Policy Center; and attorney Bill Gallagher, says: "The Cincinnati Police Department has failed to protect our residents’ constitutional rights and has instead responded with brutality and unconstitutional charges designed to eliminate their freedom of speech and assembly through fear and repression."

It asks the City of Cincinnati to "stand with its citizens and demand that the Police Department end all attempts to silence voices, especially through violence and mass arrests under Ohio Rev. Code 2917.13 ('Misconduct at emergency') or any related statue."

The letter asks the city to tell CPD to stop using curfew violations as a reason for round-up arrests and to dismiss all pending charges under that code, and to "stop using this statute to chill constitutionally-protected speech and assembly."

Here is the letter in full: