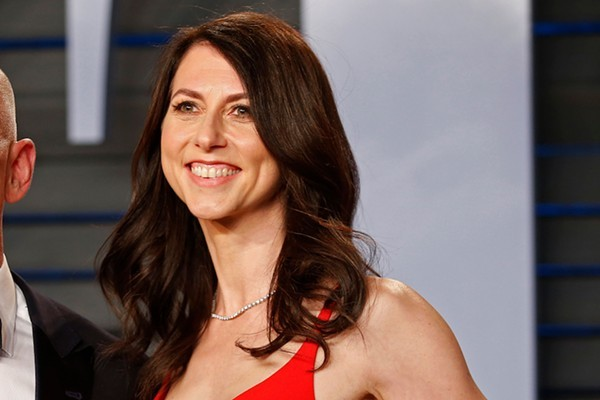 She may not have taken part in the panned and totally tone-deaf mid-pandemic star-studded cover of John Lennon's “Imagine” (thank god), but MacKenzie Scott — a billionaire philanthropist, novelist, and the 18th wealthiest person in the world — is making real change by moving quickly to fulfill a generous donation pledge she made last year after her divorce from Amazon CEO and overlord Jeff Bezos.

On Tuesday, Scott published an essay on Medium titled “384 Ways to Help” in which she detailed her reliance on the words of Emily Dickenson during the pandemic, as well as her thought process behind her massive “no strings attached” nonprofit grant blitz.

“This pandemic has been a wrecking ball in the lives of Americans already struggling. Economic losses and health outcomes alike have been worse for women, for people of color, and for people living in poverty,” Scott wrote. “Meanwhile, it has substantially increased the wealth of billionaires.”

The YMCA received $10 million, which they say they will use to "help address emergent needs in youth development, healthy living and social responsibility."

Per a release from the organization, "Preliminary plans for this gift include increased services in academic support for vulnerable students through Cradle to Career Cincinnati. This gift will also help the Y continue its work in COVID recovery through child care, virtual learning, food distribution and senior wellness."

The United Way received $25 million from Scott, which will help them "invest in bold, transformational change that empowers Greater Cincinnati’s families to live better lives," says President/CEO Moira Weir in a statement.

I am tremendously humbled and grateful national philanthropist MacKenzie Scott singled out United Way of Greater...

Posted by United Way of Greater Cincinnati on Tuesday, December 15, 2020

And Meals on Wheels Southwest OH & Northern KY received $4 million, which CEO Jennifer Steele says "this gift will allow us to accelerate progress and infrastructure to meet future needs in so many ways alongside you — our long-term supporters, partners, and volunteers."

In order to determine which organizations would receive Scott's “unrestricted” donations, her team led a data-driven research process that searched for non-profits that have a high potential for impact. Scott also said she committed to paying these donations upfront in hopes the organizations can maximize the funds and strategize more clearly.

All of the selected organizations, Scott said, “have dedicated their lives to helping others, working and volunteering and serving real people face-to-face at bedsides and tables, in prisons and courtrooms and classrooms, on streets and hospital wards and hotlines and frontlines of all types and sizes, day after day after day.”

“They help by delivering vital services, and also through the profound encouragement felt each time a person is seen, valued, and trusted by another human being.”

According to Bloomberg, Scott's fortune has increased from $23.6 billion this year to $60.7 due to the country's reliance on Amazon, which remains her primary source of wealth. But she's doing good on her 2019 post-divorce pledge, in which she admitted to having a “disproportionate amount of money to share” and said she will distribute half of her wealth “until the safe is empty.”

Chuck Collins, director of the Charity Reform Initiative at the Institute for Policy Studies, told The New York Times that he believes Scott has donated more money than anyone else in 2020 and suggested her commitment is an act of much-needed disruption among the billionaire set.

“She’s responding with urgency to the current moment,” Collins said.

“You think of all these tech fortunes, they’re the great disrupters, but she’s disrupting the norms around billionaire philanthropy by moving quickly, not creating a private foundation for her great-grandchildren to give the money away.”

Meanwhile, Scott's ex-husband, whose net worth is somewhere near $184.3 billion — meaning the dude makes an estimated $321 million per day, or $3,715 per second — remains the richest man in the world and, thanks to some unfounded online chatter earlier this year, potentially the world's first trillionaire in a matter of years.

Though he has donated upwards of $800 million to climate change organizations as of November among donations to combat homelessness, many believe he is simply “too rich.” Plus, the deplorable working conditions for Amazon workers, primarily those in the company's fulfillment centers especially in the age of COVID-19, remains one of Bezos' most prominent failures, criticisms, and is a deep scar on the company he launched in 1995.